Greetings from the IPSI Secretariat in Tokyo, Japan.
We at the Secretariat virtually attended the first part of the Fifteenth meeting of the Conference of Parties to the Convention on Biological Diversity (COP15) and the concurrent meetings from 11 to 14 October. The world leaders and ministers have voiced the importance of the momentum and political will to make progress on the post-2020 global biodiversity framework (GBF), which includes ambitious targets and mechanisms to ensure implementation, to be adopted at the second part of the COP15 to be held in Kunming next Spring.

At this critical juncture, we have good news to share with you. This month’s newsletter starts with the announcement of the establishment of the IPSI Sub-Committee on the Strategy and Plan of Action, the recipients of the Satoyama Development Mechanism 2021 and a project report from VICAM. They are followed by a brief report of the 1st part of the 15th meeting of the Conference of Parties to the Convention on Biological Diversity and its parallel events, an introduction of a recent IPSI case study submitted by “Back to Nature” from Nepal. Announcements of upcoming events include the 53rd Conference of Studying the Environmental Education at Elementary Schools and Junior High Schools in Japan, and the ISAP2021 Session on “Landscape Approaches for Biodiversity, Climate Change and Sustainable Development Co-benefits”.

As always, please feel free to contact us to submit any new case studies or other information about your activities, or if you have any questions or comments.

Establishment of the IPSI Sub-committee

As announced earlier this year, the IPSI Secretariat has been working towards updating the IPSI Strategy and developing a new Plan of Action (PoA) to make them more strategic and action-oriented, reflecting our decade of experience and the recent global targets. Following a call for applications distributed to all IPSI members, 15 people were appointed as members of the sub-committee by the Chair of the IPSI Steering Committee, taking into due consideration the balance of gender, regions, and organisation types. The first sub-committee meeting was held online on 24 September, in which the outline of the IPSI decade activities was shared and the working process for the next step was discussed.

We are pleased to have a number of experienced members in the sub-committee and greatly appreciate their contributions to the further development of IPSI.

For a list of the sub-committee members, please see here.

The Satoyama Development Mechanism (SDM) Secretariat announced a call for proposals for SDM 2021 earlier this year. By the deadline for applications, the SDM Secretariat received a total of 17 eligible applications and the following six were selected, which were deemed the most promising for the implementation and promotion of the concept of the Satoyama Initiative.

The SDM Secretariat wishes to thank all the applicants for their applications and interest in the SDM. More information can be found on the SDM website here. If you have any questions regarding the SDM, please contact the SDM Secretariat directly at sdm@iges.or.jp. 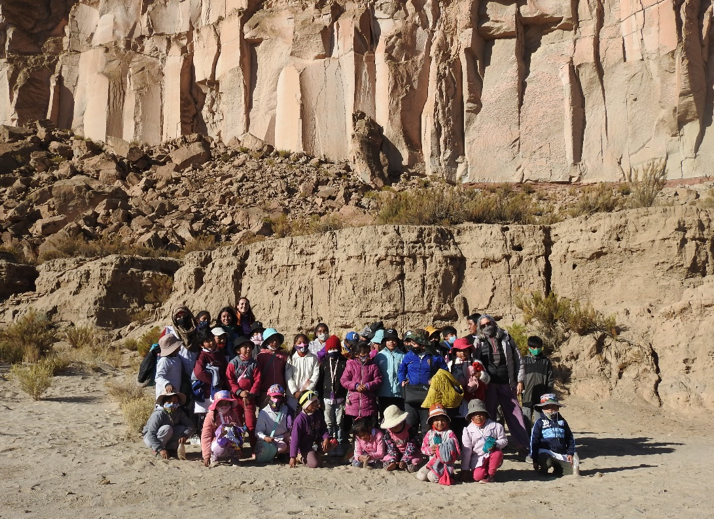 The IPSI Secretariat recently received a project report from Vicuñas, Camelidos y Ambiente (VICAM), Argentina, on their school activity designed to promote appreciation of multiple values of the surrounding biocultural heritage and the pastoral livelihood. The report highlights the remarkable capacities of children to interpret the painted figures and their relationship with the socio-environmental history of the area. This project was implemented as part of the SDM2020 project.

For the project details, please see the full write-up of the report here.

Delegates to the Convention on Biological Diversity (CBD) met in a hybrid format, in Kunming, China and virtually, from 11 to 14 October 2021.

At the two-day High Level Segment held on 12 and 13 October, leaders and ministers announced their commitments to act urgently towards putting the biodiversity on the path to recovery and the importance of mainstreaming biodiversity into their policies and actions. They emphasized the importance of the development, adoption and the implementation of the Post-2020 Global Biodiversity Framework (GBF). Many ministers and leaders announced their commitments and emphasized the importance of adopting the 30-by-30 target, to protect at least 30% of the world’s land and ocean by 2030 and to join the High Ambition Coalition for Nature and People, an intergovernmental group of currently 73 countries.

For the effective and urgent implementation of actions, leaders also showed their commitments by announcing financial support. The Global Environment Facility, together with the United Nations Development Programme and the United Nations Environment Programme, committed to fast-track financial support to developing countries to promote rapid implementation of the post-2020 global biodiversity framework. The European Union announced that it would double official development assistance funding for biodiversity, and the governments of France and the UK announced the allocation of additional climate funding to biodiversity projects. The President of the People’s Republic of China, Xi Jinping. announced the creation of the Kunming Biodiversity Fund, with assets of approximately USD 230 million to promote conservation of biodiversity in developing countries.

The Minister of the Environment of Japan, Mr. Tsuyoshi Yamaguchi, pledged an additional USD 17 million for the second phase of the Japan Biodiversity Fund. Referring to the Satoyama Initiative, he announced that Japan would “further promote the good practices that takes advantages of the natural environment to solve social challenges, including climate change and that to further initiate projects under the Satoyama Initiative in the developing countries towards the realization of 2050 vision” of living in harmony with nature.

Ministers, at the closing of the High Level Segment on 13 October, adopted the Kunming Declaration: “Ecological civilization: building a shared future for all life on Earth”. Ministers committed in the declaration to, inter alia, ensure the development, adoption and implementation of an effective post-2020 GBF; to continue to promote the mainstreaming of conservation and sustainable use of biodiversity into decision-making processes; accelerate and strengthen the update of the national biodiversity strategies and action plans; and increase the application of ecosystem-based approaches, One Health and other holistic approaches ensuring benefits across economic, social, and environmental dimensions.

Please see the CBD website here for reports and documents, including the Kunming Declaration.

UNU-IAS participated on 12 October in the parallel High Level Policy Forum and Dialogue entitled “Collaboration and Cooperation: The Roles of Communities, Science and NGOs in Biodiversity Conservation and Utilization”. UNU-IAS Director, Dr. Shinobu Yamaguchi, gave a statement highlighting that conserving, restoring and sustainably using biodiversity in production landscapes can result in important benefits for the most pressing challenges our society faces today. And that by re-directing harmful subsidies into innovative policies that reward farmers for sustainable practices such as socio-ecological production landscapes and seascapes promoted by the Satoyama Initiative, governments can achieve socio-economic development goals while reducing emissions and protecting biodiversity, helping to achieve the Sustainable Development Goals and the Paris Agreement on climate change.

A COP15 parallel event named “Ecological Civilization Forum”, in line with the theme of the COP15, also took place in a hybrid format, on 14 and 15 October. Seven sub-forums took place covering themes ranging from strategies for carbon neutrality to examples of implementation of Nature-based Solutions and Natural Capital Accounting.

For more information on the forum, please see here.

The CBD Resumed sessions of SBSTTA 24, SBI 3 and WG2020-3 is to take place in Geneva, Switzerland from 12 to 28 January 2022. The second part of the COP15 is currently planned to take place in person in April/May 2022 in Kunming, China, where the post-2020 Global Biodiversity Framework will be adopted. 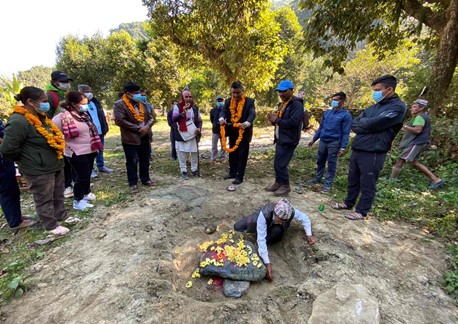 We are pleased to share a case study submitted by the Back to Nature Private Limited from Nepal. Back to Nature has submitted their case on the promotion of ecotourism in the surrounding landscape of the World Peace Biodiversity Park, Pokhara, Kaski district, Nepal. The study explains how ecotourism has become an integral part in the development of the natural areas in Nepal as they help uplift local livelihoods and create economic opportunities. Working with the local government, local NGOs, local communities, Back to Nature constructed eco-trails, a welcome gate, information boards, ponds, chautari, a traditional resting place for hikers, and sanitation facilities. The authors report that interventions have yielded “positive results in terms of sustainable use of biological resources by adopting long-term sustainability, enhanced governance and effective conservation of SEPLS” and is an example that showcases how ecotourism can be beneficial to nature conservation and sustainable development. Yet, they also point out possible challenges including “over exploitation of resources, lack of timely maintenance of infrastructure, decline of local people’s enthusiasm due to less cost-benefit ratio”. The study also notes the importance of communication among stakeholders, and continuous technical, financial and institutional support to secure the long-term sustainable management of the area.

For details of the case study, please see here on the IPSI website.

The 53rd Conference of Studying Environmental Education at Elementary and Junior High Schools in Japan will be held online on Friday 19 November 2021. Dr. Evonne Yiu of the IPSI Secretariat will be speaking and will join the panel discussion with Ms. Kaoru Nemoto, Director of United Nations Information Centre (UNIC) Tokyo. Ms. Nemoto will speak on “SDGs matters to you and me: building minds to connect with the world and for our planet” and Dr. Yiu will be speaking about “The current global environment, biodiversity and us”. They will be joined by a panel of teachers from elementary and junior high schools in Tokyo who share a common passion for and dedication to environmental education, to exchange views on how to inspire children’s interest for nature to build sustainable futures for our planet.

The session will be held in Japanese only. Registration before 8 November is required to join the session.

For details of the event, please see here (Japanese only).

An online session on “Landscape Approaches for Biodiversity, Climate Change and Sustainable Development Co-benefits” will be co-organised by the Institute for Global Environmental Strategies (IGES) and the IPSI Secretariat at UNU-IAS on 2 December, 11:00-12:00 (JST), during the International Forum for Sustainable Asia and the Pacific (ISAP) 2021. With the backdrop of the IPBES-IPCC co-sponsored workshop report highlighting the interdependence of biodiversity and climate change, the session will bring together speakers with hands-on experiences from SEPLS across the world, and explores transformative actions for biodiversity, climate and sustainable development co-benefits that we should focus on in “the decisive decade for sustainability”. This session will include a keynote and framing presentation on biodiversity-climate nexus in SEPLS, followed by presentations of two case studies and a panel discussion.

Further details of the session will be provided on the ISAP website in due course. Please keep an eye out for updates.