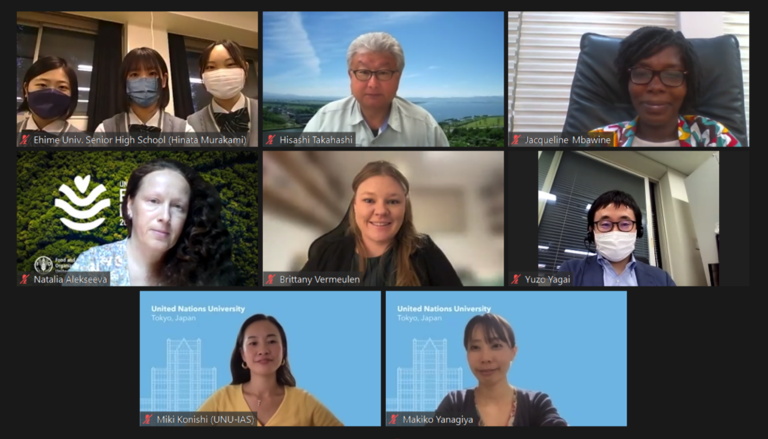 UNU-IAS, host of the IPSI Secretariat, organised a symposium to celebrate conservation efforts from around the world for the International Day for Biological Diversity on May 22. Focused on this year’s IDB theme “building a shared future for all”, the event explored local actions aligned with the international policy agenda.

Opening the session, Toshitaka Ooka (State Minister of the Environment, Japan) announced that Japan officially pledged to join the global initiative to protect 30% of Earth’s land and sea areas. Elizabeth Maruma Mrema (Executive Secretary of the Convention on Biological Diversity) underlined that the post-2020 global biodiversity framework (GBF) calls on everybody to do their part to protect nature and achieve the vision of living in harmony with nature.

Ms Alekseeva introduced the UN Decade on Ecosystem Restoration, a global partnership to protect and revive ecosystems worldwide. She stressed that research showed that to overcome challenges on health and well-being of all life on Earth required conservation plus restoration.

Jacqueline Mbawine (Monitoring, Evaluation and Reporting Manager, A Rocha Ghana) reiterated the importance of synergies between various stakeholders within communities. A Rocha Ghana, a member of the Satoyama Initiative partnership, helped locals of the Mole region in Ghana create green business models by sustainably harvesting wood for charcoal.

Research by the Pla-Girls Team science club (Ehime University Senior High School) yielded a cost-effective PHB plastic which can be decomposed by marine bacteria. The team expressed their interest in collaborating with companies to eliminate microplastics.

Yuzo Yagai (Director of Office for Mainstreaming Biodiversity, Ministry of the Environment, Japan) announced that when the GBF is adopted, the government of Japan will announce a new national biodiversity strategy. It will focus on designating other effective area-based conservation measures (OECMs) and encouraging businesses to consider eco-friendly products and services.

In closing remarks, Shinobu Yamaguchi (Director, UNU-IAS) underlined UNU’s involvement in the UN Decade as a Collaborating Agency, supporting the global campaign with research on education and restoration best practices. She also announced that the upcoming Satoyama Initiative Thematic Review Volume 7 on the theme “Nexus among biodiversity, health, and sustainable development in managing socio-ecological production landscapes and seascapes (SEPLS)” will be a valuable resource for building a shared future for all.

The symposium was co-organised with the Ministry of the Environment of Japan (MOEJ) and the Global Environment Outreach Centre (GEOC), and supported by the Japan Conference for 2030 Global Biodiversity Framework (J-GBF).

A recording of the session is available on the GEOC YouTube channel.