The IPSI Secretariat is thrilled to announce the publication of four picture books that are part of an IPSI Collaborative Activity. You can read below the details of this impressive project. We hope these books reach people from all around the world!

The Soil and Water Conservation Bureau (SWCB), in collaboration with five other IPSI members from Chinese Taipei and the SeeDesign Co., has published a box set of four picture books depicting four cases of reviving or rebuilding local SEPLS that the SWCB supported and engaged in. These picture books use plain language as well as hand-drawn illustrations to help the general public better understand, appreciate, and support the ideas and practices of the Satoyama Initiative. The books are published in Chinese, English and Japanese to attract a wider audience.

The four cases and the four rural communities depicted in this box set include: “The Spring on the Highland”, which elaborates on how members of Gonglaoping Community in the central area of the island Taiwan strengthened bonding between old and young generations in co-managing their water resources and landscape to grow the most popular oranges and persimmons; “Farming Village Co. Unlimited” narrates how members of Gongrong and Ankang communities in northwestern Taiwan toiled and moiled for decades and finally brought back nature and biodiversity from the once degraded farmland and dying stream, and increased income from eco-friendly food production; “Letters the Blue Sea Wrote to the Land of Coastal Terrace” presents a beautiful production landscape in eastern Taiwan where indigenous people of Dipit and PateRungan tribes kept their weaving technique, tribal culture and heritage, and worked with the young generation to create terraced landscape along the coast as a love letter to mother nature; “Shining Herb Village” speaks passionately on how the second generation of Shangde community in southeast Taiwan followed the memory of childhood and returned home to work with the elders of the local Ami indigenous people in reviving the herbal industry along with the beautiful and fragrant production landscape.

The SWCB would like to share these four beautiful stories with supporters of the Satoyama Initiative and readers all over the world. It is our hope that more people, particularly those of rural communities, are encouraged by these touching stories and are willing to work together and restore or rebuild their SEPLS so to fulfil the vision of the Satoyama Initiative: living in harmony with nature.

For information on how to purchase the books (Chinese and English), please see the press release by SWCB here. Its Japanese version will be published soon. 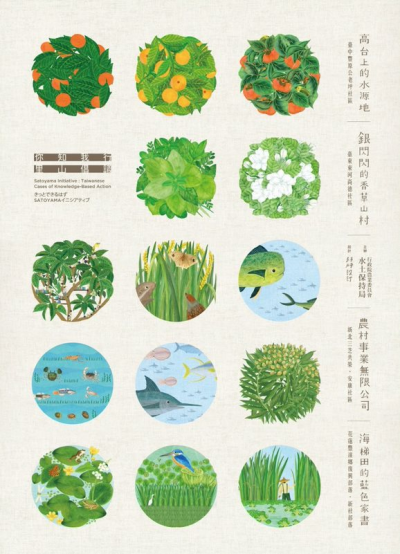