Marking two years since IPSI’s launch in October 2010 concurrent with CBD COP10, the Third IPSI Global Conference (IPSI-3) was held back-to-back with CBD COP11 in Hyderabad, India under the theme “Contribution to Achieving the Aichi Biodiversity Targets” co-hosted by the Ministry of Environment and Forests, Government of India. In addition to the key elements of IPSI-3 (Assembly and Public Forum) held on 06-07 October 2012, a series of IPSI-related events were held from 09-12 October 2012 over the course of CBD COP11 in addition to multiple events organized by IPSI members.

The IPSI Assembly was held in the afternoon of 6 October and was attended by over 60 individuals representing a wide range of member organizations. Prof. Kazuhiko Takeuchi, Vice-Rector of the United Nations University, was nominated by the floor to serve as the Assembly Chair. During the Assembly, the IPSI Steering Committee (SC) Chair, Prof. Alfred Oteng-Yeboah, presented a report on the activities of the SC since the Second IPSI Global Conference in March 2012. 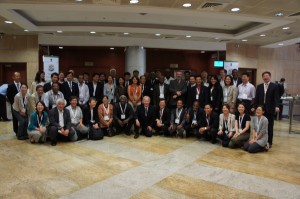 Following up on his presentation in March 2012 at IPSI-2, Dr. Jo Mulongoy, visiting professor at the United Nations University Institute of Advanced Studies, delivered a detailed presentation on progress towards developing the IPSI Strategy. He shared a final draft version of the IPSI Strategy for the Assembly’s approval, which was subsequently endorsed by the Assembly pending final changes suggested by the members. 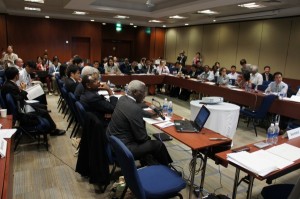 [Presentations during the IPSI-3 Assembly]

Representatives of Japan’s Fukui Prefecture also delivered a presentation titled “Fukui: The Land of 1500 Years’ Satoyama” and made a formal offer to host the Fourth IPSI Global Conference in September 2013. The Assembly members expressed their appreciation and gratefully accepted the offer by Fukui Prefecture.

Under the theme “IPSI’s Contribution to Achieving the Aichi Biodiversity Targets”, more than 70 individuals attended the Public Forum, which was opened with remarks from Prof. Govindan Parayil (Director, United Nations University Institute of Advanced Studies), and Dr. Balakrishna Pisupati (Chairman, National Biodiversity Authority, India). Following short reports on the outcomes of the IPSI-2 Public Forum and follow-up efforts, Mr. David Duthie (Secretariat of the Convention on Biological Diversity) provided further context for the day’s discussions with a presentation titled “The Strategic Plan for Biodiversity 2011-20, the Aichi Biodiversity Targets, and National Implementation”. 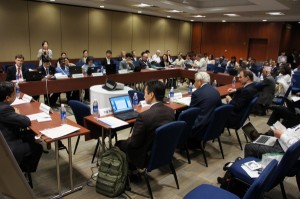 Following an overview of the day’s planned discussion by each of the co-chairs, Ms. Yoko Watanabe (GEF Secretariat) and Dr. Anil Kumar (MSSRF), the Public Forum was divided into three Working Group sessions: 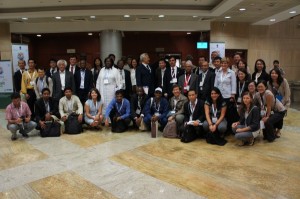 To frame the discussions, each working group session began with a short presentation by the facilitator linking the working group topic with corresponding Aichi Biodiversity Targets. Following extensive and fruitful discussions, short presentations (Group 1; Group 2) were prepared by each working group to share with the plenary. The final presentations shared a number of key points of discussion as well as insight into how IPSI is poised to contribute to achieving a large range of the Aichi Biodiversity Targets. A final plenary discussion session led by the co-chairs provided a broad range of useful suggestions for further development of the partnership and its activities.

An evening of enriching presentations and an informal dinner reception contributed to a successful “IPSI Evening” on 09 October 2012 at the Westin Hotel. Under the theme “Achievement and Further Development of the International Partnership for the Satoyama Initiative (IPSI)”, a range of speakers shared their insight with the 135 attendees. Opening remarks were delivered by Mr. Kazu Takemoto (Director, IPSI Secretariat) and Mr. Masanori Nakano (Consul General, Consulate General of Japan, India). 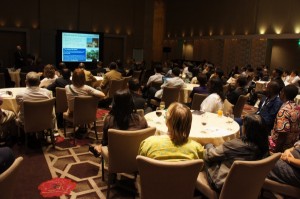 A keynote address was delivered by Prof. Kazuhiko Takeuchi (Vice-Rector, United Nations University), under the theme “IPSI: Perspectives on Sustainable Socio-Ecological Production Landscapes and Seascapes”. In addition to providing an overview of IPSI’s development since its formation in October 2010 in Nagoya, Japan, his presentation addressed the relevance of the Rio+20 outcomes for IPSI, and he also emphasized the central role of satoyama and satoumi areas for recovery in Japan’s tsunami-affected Tohoku region, and concluded his presentation by emphasizing the need to develop new business models that can simultaneously help conserve biodiversity, revitalize the economy, and help to maintain traditional culture. 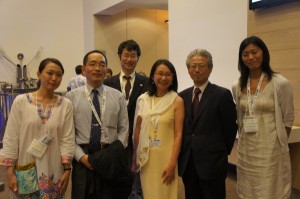 [Participants Pose for a Photo during the Informal Banquet Dinner]

[11 October: Side Event: Achievements and Further Development of IPSI]

During this side event, co-organized by the IPSI Secretariat and Ministry of the Environment, Government of Japan (MOEJ), and chaired by Prof. Alfred Oteng-Yeboah (Ghana National Biodiversity Committee), a selection of IPSI’s achievements over the past two years since its launch in October 2010 were showcased for the 80 participants. 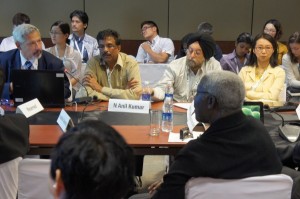 Opening remarks were delivered by Mr. Kazuaki Hoshino (MOEJ), who congratulated IPSI on its development and emphasized the importance of COP11 as an opportunity for following up on the key outcomes of COP10, held in October 2010 in Nagoya, Aichi, Japan. Next, the Director of the IPSI Secretariat, Mr. Kazu Takemoto, delivered a short presentation providing attendees with an overview of IPSI’s development over the previous two years including its growth from 51 founding members to 126 member organizations. Mr. Takemoto also thanked attending delegates who voiced their support of IPSI during the sustainable use discussion in Working Group 1 that morning.

Dr. Jo Mulongoy, visiting professor at UNU-IAS, provided attendees with an overview of the IPSI strategy development process and introduced the strategy document endorsed over the weekend by the IPSI Assembly. He gave brief descriptions of each of the strategy’s five sections and its annex, and finished the presentation by emphasizing the important role the strategy document will be able to play in measuring progress, mobilizing resources, and communicating the usefulness of the Initiative.

IPSI-3 and COP11 were held back-to-back, and to promote connectivity across the events, one of the co-chairs of the IPSI-3 Public Forum, Dr. Anil Kumar (MSSRF), gave an overview of the outcomes of the three working group discussions. After presenting the recommendations of all three groups, Dr. Kumar expressed his optimism for translating these ideas into on-the-ground action as IPSI moves towards IPSI-4 in Fukui, Japan. 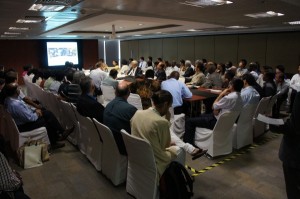 [Participants at the well-attended side event]

Finally, in-depth presentations were delivered on two of IPSI’s active collaborative activities, namely Community Development and Knowledge Management for the Satoyama Initiative (COMDEKS) and indicators of resilience in SEPLS. Background information and the latest updates on COMDEKS was provided by Ms. Fumiko Fukuoka (UNDP), followed by insights provided by Mr. Prabhjot Sodhi (GEF-SGP) from on-the-ground application of the COMDEKS programme in India, where more than 100,000 people are currently its beneficiaries. Dr. Pablo Eyzaguirre (Bioversity International) delivered the final presentation on the development and testing of indicators of resilience in SEPLS. Among other things, Dr. Eyzaguirre emphasized the usefulness of IPSI in bringing together experience from a great diversity of landscapes, and stressed the need for further testing and refinement of the indicators.

Co-organized by UNDP and IPSI, this Community Palli session included a broad range of speakers from around the world, who provided the 85+ participants with insight into the building of social and landscape resilience and linkages between the two concepts. Following opening remarks by Mr. Wataru Suzuki (IPSI Secretariat) and Ms. Fumiko Fukuoka (UNDP), Prof. Alfred Oteng-Yeboah (Ghana National Biodiversity Committee) provided context for the day’s discussions.

Among other things, the day’s presenters were asked to consider what types of issues should be taken into account when trying to increase the resilience of landscapes and seascapes, and what had triggered cooperation among communities to agree upon common goals in facilitating sustainable livelihood activities in shared landscapes and seascapes.

Subsequently, short presentations were delivered by the following speakers:

To draw together the diversity of insight contained in the presentations, Dr. Pablo Eyzaguirre (Bioversity International), acted as the session’s discussant. The presentation files for all the discussants are available for download here. 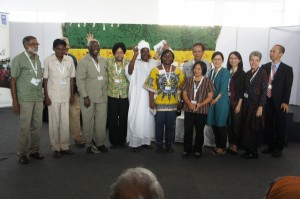 [Speakers, Discussants and Co-chairs Gather for a Group Photo]