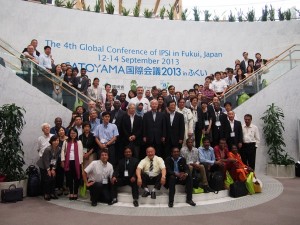 (NOTE: The Official Report from IPSI-4 is now available here)

A warm welcome had been prepared for participants arriving from overseas by the local host of IPSI-4. A recurring theme throughout the week of events was a deeper focus on local perspectives and activities on-the-ground. In line with this, the Fukui Prefectural Government organized a so-called “Satoyama Stay” for overseas participants. Local people from Fukui Prefecture graciously welcomed IPSI members into their homes to give them a first-hand look at life in the area. Each Satoyama Stay was unique, and IPSI members told stories of how they had visited local rice fields and harvested rice. Other members were given personalized tours around the prefecture, while some even visited local temples and participated in Buddhist meditation.

A further opportunity was offered to all participants on 12 September 2013, when everyone was invited on an excursion to visit sites around Fukui Prefecture and learn about efforts being made on-the-ground to sustainably manage satoyama landscapes, and restore biological diversity. Over the course of the one-day excursion, participants traveled through many satoyama and satoumi areas, and visited paddy landscapes in Shirayama District in Echizen City and the Mikatagoko Lake District in Wakasa Town and Mihama Town. They learned about conservation and promotion efforts by Echizen City’s Shirayama District to bring back the wild Oriental Stork. In the Mikatagoko Lake District, efforts were also introduced to restore the habitats of fresh water clams, and secure fishways for fish to freely move to and from the lake and the paddy fields.

In addition to providing overseas participants with an intimate glimpse of local efforts being undertaken to maintain Japan’s satoyama, the excursion and Satoyama Stay were the perfect start to IPSI-4 with its focus on local perspectives and experiences. 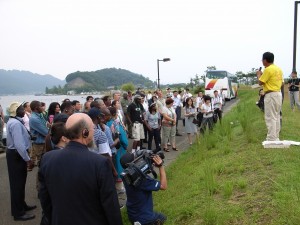 Among other things, the Assembly endorsed the five-year IPSI Plan of Action, which provides a supportive framework to guide the implementation of activities in line with the four strategic objectives described within the IPSI Strategy. In addition, the Secretariat announced tentative plans to hold IPSI-5 from 4-5 October 2014 in Pyeongchang, Republic of Korea, in conjunction with the twelfth Conference of Parties to the Convention on Biological Diversity (CBD COP12). 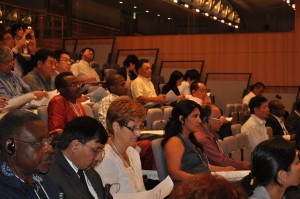 Starting in the afternoon of 13 September 2013 and concluding in the morning of 14 September 2013, the IPSI-4 Public Forum was held under the theme “Challenges and opportunities for socio-ecological production landscapes and seascapes (SEPLS) from local perspectives” (the programme is available here).

The Public Forum aims to (1) strengthen collaboration and synergies among IPSI members and other relevant initiatives and programs, and (2) enhance understanding and raise awareness of the importance of socio-ecological production landscapes and seascapes (SEPLS). In consideration of this two-fold purpose, members of the interested public are encouraged to attend, and the 142 participants demonstrated an active engagement throughout the proceedings. 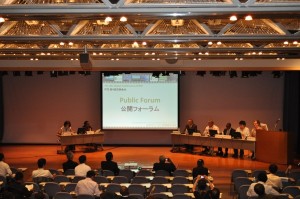 Public Forum co-chairs Ms. Yoko Watanabe (Program Manager and Senior Biodiversity Specialist, Secretariat of the Global Environmental Facility (GEF)) and Dr. Wanja Nyingi (Coordinator, Kenya Wetlands Biodiversity Research Group) guided the proceedings smoothly, starting with opening remarks by Mr. Kazuaki Hoshino (Director-General, Nature Conservation Bureau Ministry of the Environment, Japan). Mr. Hoshino, who participated in the launch of IPSI in October 2010 in Nagoya, Japan introduced the development of the partnership since this time as well as its significance leading forwards to CBD COP12 to be held in 2014.

In line with the forum’s theme, Mr. Hiroaki Sekioka (Environmental Assessment Center, Co. LTD), who is an expert in the conservation and sustainable use of SEPLS in Fukui Prefecture, delivered a keynote presentation on local experiences and lessons from satoyama/satoumi. Following Mr. Sekioka’s presentation, representatives from five different IPSI member organizations delivered short presentations and then answered questions regarding their organizations’ innovative activities and local experiences with SEPLS management (click the names below for presentation files). 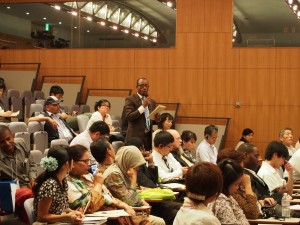 The plenary session then broke into five smaller groups to provide opportunities for dynamic discussion among members (the introductory presentation file is available here). During these discussions, members shared their own experiences, but also frequently referred to the things they had recently experienced first-hand during the excursion and Satoyama Stay earlier that week. Volunteers from each group introduced the outcomes of these discussions during the closing plenary. Recurring themes included the need for deeper understanding of the complexity of SEPLS in terms of their ecological, economic and societal characteristics. Others emphasized the importance of reaching out to and fully engaging women and younger generations in such efforts. A more detailed synopsis of the Public Forum discussion is available here. 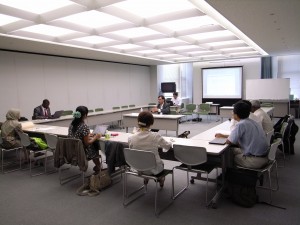 A poster session was held on 13-14 September 2013, featuring posters in the IPSI category (English) and 53 in the Fukui category (Japanese), making a total of 97 posters (abstracts of the posters are available here). Within the context of an IPSI Collaborative Activity, a SATOYAMA Poster Award was arranged by the Ink-jet Cartridge Satogaeri Project with the support of the Fukui Prefectural Government and United Nations University. Winners were chosen through voting by the participants, and an award ceremony took place during the Public Symposium. All poster data can be found here. 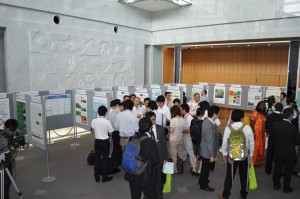 A national network to promote the Satoyama Initiative in Japan was launched in the evening of 13 September. Governor Issei Nishikawa (Fukui Prefecture) and Governor Masanori Tanimoto (Ishikawa Prefecture) were selected as the co-leaders of the Network, and Japan Committee for IUCN was appointed as the sub-leader.

An exciting dialogue was organized in the evening of 13 September by UNU-IAS, Fukui Prefectural Government, Ishikawa Prefectural Government, and featured the governors of Ishikawa Prefecture and Fukui Prefecture, both of whom have acted as champions of satoyama and satoumi in Japan. During the dialogue, which was moderated by Prof. Kazuhiko Takeuchi (Senior Vice-Rector, United Nations University), both governors highlighted innovative and cutting-edge efforts being carried out under their political leadership in their prefectures.

Governor Nishikawa (Fukui Prefecture) pointed, among other things, to the creation of a specially branded organic rice that is grown with reduced chemical inputs and in line with biodiversity-friendly practices, which has been recreating a welcoming environment for the Oriental Stork. He also spoke about restoration efforts in and around Mikatagoko Lake and about the coming establishment of a satoyama/satoumi research institute (presentation file here). Governor Tanimoto (Ishikawa Prefecture) described the efforts toward conservation and sustainable use of satoyama/satoumi, which can be seen in the GIAHS designation of Noto District, focusing especially on the important roles played by the people who live in the area. He also introduced new support mechanisms including the establishment of funding organizations and collaboration with private companies (presentation file here).

At the conclusion of this enriching week of events, the Public Symposium was held by the Fukui Prefectural Government in the afternoon of 14 September 2013, and was attended by hundreds of members of the general public. Opening remarks were delivered by Prof. Alfred Oteng-Yeboah (Chair, IPSI Steering Committee), who reflected on the development of IPSI over the years and expressed gratitude to the people of Fukui for the warm reception. Mr. Kazuaki Hoshino (Director-General, Nature Conservation Bureau Ministry of the Environment, Japan) also delivered remarks emphasizing the diversity of experiences around the world of people sustainably managing their landscapes and seascapes, and the importance of IPSI in bringing together these experiences.

To introduce IPSI and the proceedings of the previous days to local people, Prof. Kazuhiko Takeuchi (Senior Vice-Rector) delivered a presentation summarizing what had taken place during IPSI-4 as well as the key lessons and points of discussion during the Public Forum.

Finally, Governor Issei Nishikawa took the stage to express his thanks to the participants in the various events held throughout the week, who collectively totaled over 2,000. He highlighted the fruitful sharing of experiences and knowledge, and concluded by asking international participants to take the positive experiences of the past days with them as they return home. The symposium was concluded with the impressive message toward the future of satoyama by Ms. Miyu Nitta and Ms. Kana Miyoshi, high school students in Fukui Prefecture.

Ministry of the Environment of Japan (Japanese only)