TOPEVENTSRio+20 Side Event: The Satoyama Initiative and the Green Economy

Rio+20 Side Event: The Satoyama Initiative and the Green Economy

A side event titled “The Satoyama Initiative and the Green Economy” was held on 18 June 2012 during the United Nations Conference on Sustainable Development (Rio+20) in Rio de Janeiro, Brazil. The event was co-organized by the Ministry of the Environment Japan (MOEJ) and the Secretariat of the International Partnership for the Satoyama Initiative (IPSI).

Opening remarks were delivered by Mr. Kazuhiko Takemoto (Senior Advisor to the Minister, Ministry of the Environment / Director, IPSI Secretariat), who introduced the Satoyama Initiative to the audience. He also recognized the importance of multi-stakeholder participation in working to transition to a Green Economy and introduced the diverse speakers appearing at the side event, representing the United Nations, national governments, international organizations, and the private sector.

The keynote address was delivered by Professor Kazuhiko Takeuchi (Vice Rector, United Nations University), who spoke about “Developing a Green Economy: The Role of Socio-Ecological Production Landscapes (SEPLs)”. Prof. Takeuchi introduced three key points needed to move towards society in harmony with nature, and to transition to a Green Economy: 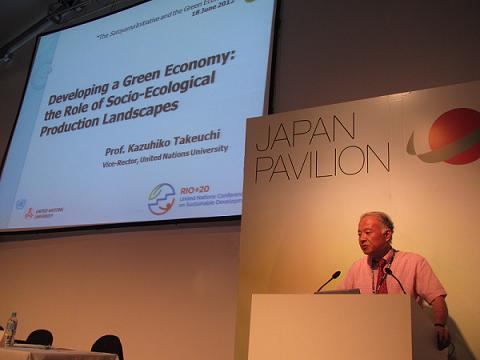 Focusing on the first key point of new business models, Prof. Takeuchi provided the audience with three in-depth examples: (1) the tea forests in Yunnan, China, where multi-cropping has added value to tea production, leading to a nine-fold increase in market value over conventional cultivation. At the same time, the tea forest is more stable in the face of drought or erosion, causing the landscape’s resilience to be enhanced; (2) Japan’s Sado Island, where tourism, conservation and certification mechanisms are combining to revitalize SEPLs; (3) Kandyan homegardens in Sri Lanka, where partnerships with multiple companies have created market access for the diverse products found in this type of SEPL.

The subsequent panel discussion was enriched by four presentations considering the challenges of transitioning to a Green Economy, the effectiveness of the Satoyama Initiative, and how it can further contribute to achieving a Green Economy. 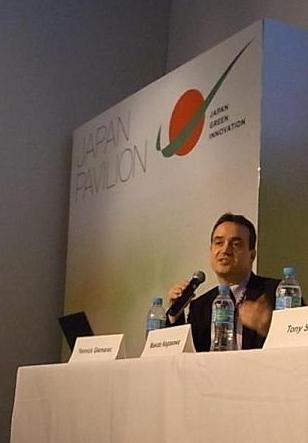 (1) Dr. Yannick Glemarec (Executive Coordinator UNDP-GEF / Director of Environment Finance, Energy and Environment Group, Bureau for Development Policy, UNDP) focused on “Investing in Community-Based Resilience of Socio-Ecological Production Landscapes”. Dr. Glemarec briefly introduced some of the critical challenges facing the world in the coming decades before giving a detailed description of the landscape approach employed by UNDP. He emphasized the need for locally-adapted solutions and spoke of how the UNDP’s Small Grants Programme mechanism is being used to implement the Community Development and Knowledge Management for the Satoyama Initiative Project (COMDEKS) in 11 different countries. 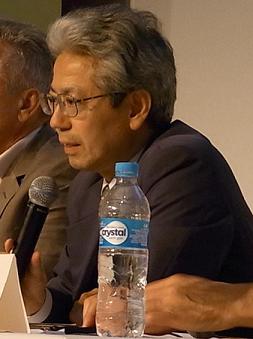 (2) Mr. Kazuaki Hoshino (Advisor to Environment Minister of Japan) delivered a presentation titled “Socio-Economic Activities in SEPLs: Japan’s Experience”. After providing an overview of the development of IPSI, he provided four specific examples of member activities: (a) collaboration between Japan’s Nobeoka City and the private company Asahikasei Corporation, which has helped to regenerate forests, restore biodiversity, and increase local employment by making use of unused forest byproducts; (b) the “Ink Cartridge Satogaeri Project”, an ambitious recycling project jointly implemented by six major printer manufacturers (Brother, Canon, Hewlett-Packard, Lexmark and Seiko Epson) and resulting in a wide range of co-benefits; it has generated funding for activities aimed at conserving and enhancing SEPLs; (c) commercial unused bamboo use as tissue to produce paper products by Chuetsu Pulp & Paper Co., Ltd., leading to wise management of degraded and encroaching bamboo forests; (d) restoration and revitalization of satoyama/satoumi communities in Urato Island in Miyagi Prefecture after the Great East Japan Earthquake and Tsunami, an IPSI collaborative activity conducted by Tohoku University, MOEJ, CEPA Japan, Ink Cartridge Satogaeri Project and UNU. 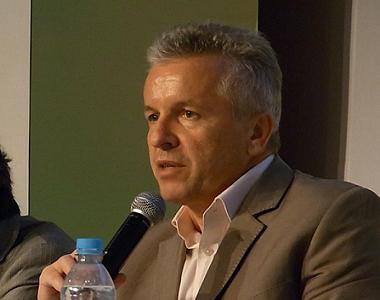 (3) Dr. Tony Simons (Director General, World Agroforestry Centre ? ICRAF) spoke about “Tree Landscapes of the Future”. After pointing out the difficulties in defining the term “forest” or even what truly constitutes “deforestation”, Dr. Simons gave an overview of historical forestry levels around the world. He presented maps of current global forest and agroforestry levels and emphasized the importance of combining these into a single paradigm. Currently, one of the clear challenges is the sectoral approach being used, which seeks to segregate and separate landscapes into their individual pieces rather than perceive the mosaic characteristics of real-world landscapes. The forest transition curve was presented along with data demonstrating a clear correlation between legal title (adjudicated vs. unadjudicated land) and land use. Finally, the economic, social and ecological implications of considering land access rights within the broader discussion of agroforestry and mosaic landscapes were underscored. 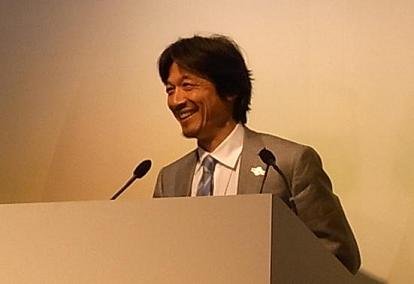 (4) Mr. Makoto Nagasawa (President and CEO, FRUTA FRUTA, Inc.) delivered a presentation titled “Realization of Green Economy through ‘Agroforestry Marketing’”. Mr. Nagasawa began with a personal account of how his understanding of agroforestry has evolved over the years. He also pointed to the specific case of monoculture pepper cultivation in cleared rainforest areas; the highly profitable crop was called “black diamond”, but eventually failed due to disease. Such catastrophes caused people to take a closer look at how indigenous peoples had been living in the area, leading to the decision to move away from monoculture production to the cultivation of multiple species. By planting around 70 species of trees on blighted land, a strongly positive effect has been observed over the past 20+ years in which there has been a dramatic and sustained increase in biomass. He pointed out that a more direct way for some companies to engage in CSR (corporate social responsibility) would be to simply source their raw materials from such areas and provide the market with value-added products characterized by good agricultural practices and ecosystem management. He also stressed the importance of forming alliances with private companies to make better use of the diverse agricultural products obtained from mosaic landscapes. Through such marketing efforts by the private sector, there can be a beneficial flow of value and products between the North and South. 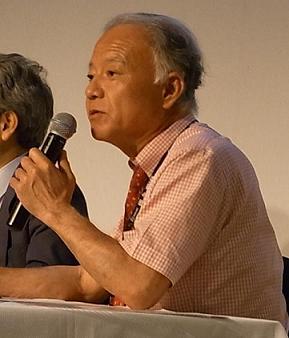 Professor Takeuchi acted as moderator for a panel discussion among the speakers and to take questions and comments from the floor. He first drew on his recent experience visiting an agroforestry site in Northern Brazil, which was directly abutted by a massive palm oil monoculture. He asked Dr. Simons about the possibility for mainstreaming the idea of SEPLs into forestry activities. Dr. Simons pointed out that this is a major challenge faced not only by ICRAF, but by the whole world, as it attempts to grow as much food in the next 40 years as in the last 8,000 in an effort to feed the growing global population. He pointed to multisectoral approaches as a great opportunity and emphasized the continual need for knowledge sharing and awareness raising.

Pointing out the wide variety of different approaches people take to recover natural areas, increase agricultural output and reshape landscapes, Prof. Takeuchi next asked Mr. Hoshino about how these can be reconciled to achieve societies in harmony with nature. Mr. Hoshino replied by using the example of the planned national park being set up in Japan’s disaster-affected northeastern region, where attention is being paid not only to protecting important ecosystems, but also designing natural areas so that they are resilient and protective in the face of natural disasters. Such an approach takes into account both the good side and the destructive side of nature.

Focusing in on Mr Nagasawa’s description of partnerships with private business, Prof. Takeuchi asked for more detail on how such proposed alliances can be coordinated. Mr. Nagasawa pointed out that the biggest challenge is coordinating activities with large companies, which has caused such arrangements to be relatively rare. He emphasized that despite what partnerships exist, there is a need to manage resources from an environmental point of view. Looking forward, he said that there is a need to form an association with the sort of organization that is capable of managing such arrangements among multiple diverse industries.

As Prof. Takeuchi opened the panel up to the floor for questions, emphasis was again placed on the importance of access to rights (both ownership of land and access to resources) and how cultural aspects can be of critical importance in the sustainable management of certain landscapes. The importance of developing cross-sectoral partnerships was underscored, and the Satoyama Initiative approach was praised by one audience member for being “so close to the ideas of the people”.

The keynote presentation as well as the power point presentations of all four speakers are now available for download in the right-hand column. 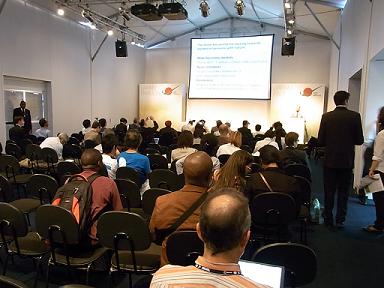 Members of the Audience 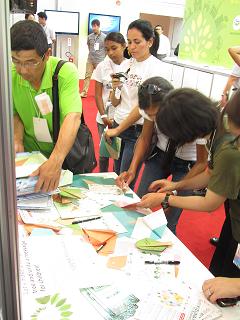 Young Adults on their way to the Side Event