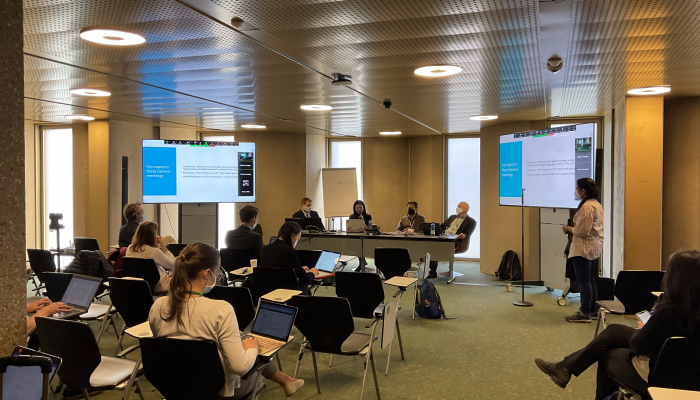 On 24 March 2022, UNU-IAS co-organised a side event at the Geneva Meetings of the Convention on Biological Diversity (CBD) to discuss the potential of socio-ecological production landscapes and seascapes (SEPLS) in the designation and management of other effective area-based conservation measures (OECMs).

To contribute to the OECM policy process, UNU-IAS and Conservation International (CI) initiated a project to collect information and ideas from their years of experience working with landscape management and apply lessons learned to OECM designation and implementation. William Dunbar (Project Manager, CI) defined a landscape approach as an area-based conservation concept that considered all parts and stakeholders of a landscape as connected. He presented results from a February 2022 Expert Dialogue hosted by UNU-IAS and CI, which produced insights on a special component of OECMs known as connected systems, which range from trade to culture and recognise the landscape management of local and indigenous communities.

Suneetha Subramanian (Research Fellow, UNU-IAS) moderated a panel discussion focused on the challenges, opportunities, and importance of integrating OECMs in the Geneva Meetings for the Post-2020 Global Biodiversity Framework (GBF).

Stephen Woodley (IUCN) pointed out that areas designated as OECMs should have significant biodiversity value and must be governed effectively to protect that biodiversity. Terence Hay-Edie (UNDP) highlighted the collaboration between UNDP and UNU-IAS on the Satoyama Initiative, a global effort to realise society in harmony with nature through integrated landscape management approaches. Joint activities have included analysing the sustainability and institutionalisation of SEPLS in various countries to measure their potential as OECMs.

Panellists emphasised the importance of recognising effective landscape management by indigenous peoples and local communities, and including their governance in the GBF. Lika Sasaki (UNCTAD) discussed the BioTrade Initiative, a programme managed by UNCTAD promoting sustainable trade and investments, which considers local contexts when setting guidelines. Mirna Fernandez (GYBN) pointed out that failing to include governance in the GBF would lead to inequality in conservation efforts. Mrinalini Rai (Women4Biodiversity) added that landscape approaches and OECMs should involve all segments of the population, including women and youth.

The speakers concluded that established landscape management systems should be supported to bridge gaps in capacity and legal protections, and that transformative change was needed to protect biodiversity and mitigate climate change.

This event was held alongside the Twenty-fourth Meeting of the Subsidiary Body on Scientific, Technical and Technological Advice (SBSTTA-24). It was organised by UNU-IAS, Conservation International (CI), the United Nations Conference on Trade and Development (UNCTAD), Ministry of the Environment, Government of Japan, and the International Union for Conservation of Nature (IUCN).