The World Agroforestry Centre (ICRAF) opened its doors to the International Partnership for the Satoyama Initiative (IPSI) to hold its second global conference (IPSI-2) from 13 to 14 March 2012. About 90 participants representing 58 different member organizations gathered for two days of active discussion, presentations and the development of action plans. The theme of IPSI-2 was “Strategy for Realising Societies in Harmony with Nature”. Following the IPSI assembly on the morning of 13 March, the second public forum was opened with remarks from Dr. Tony Simons (Director General, ICRAF), Prof. Alfred Oteng-Yeboah (Chair, IPSI Steering Committee) and H.E. Mr. Toshihisa Takata (Ambassador of Japan to the Republic of Kenya). These remarks were followed by a keynote address from Prof. Kazuhiko Takeuchi (Vice Rector, United Nations University), whose presentation on “The Next Step toward Societies in Harmony with Nature” focused around new business models, new commons and resilience of socio-ecological production landscapes (SEPLs). Public forum participants then split into three different specialized working groups focusing on (1) Capturing and Promoting Resilience in SEPLs including Disaster Risk Management, (2) Sharing Experiences of Restoring SEPLs and (3) Revitalizing Local Communities through Enhancing Traditional Knowledge and Empowering Young Successors. During each of the three working group sessions, representatives from a variety of IPSI member organizations delivered presentations based on their own expertise and backgrounds. Following the presentations, some of the working groups broke into sub-groups to focus on specific issues. The final outcome of each working group was in line with the overall theme of IPSI-2, namely strategy for the partnership’s continuing development. Based on the discussions and presentations, areas for collaboration and concrete future actions were identified, and in some cases lead organizations were designated to guide collaboration in these areas. You can download and read the action templates here. IPSI-2 ended with the partnership stronger than ever and with a set of concrete actions for the coming months. Looking forward, the partnership’s 117 member organizations have clear objectives and a guiding vision that will help to achieve the Satoyama Initiative’s vision of realizing societies in harmony with nature. To download meeting documents and presentations from the three working group sessions, please visit the website of the Satoyama Initiative. 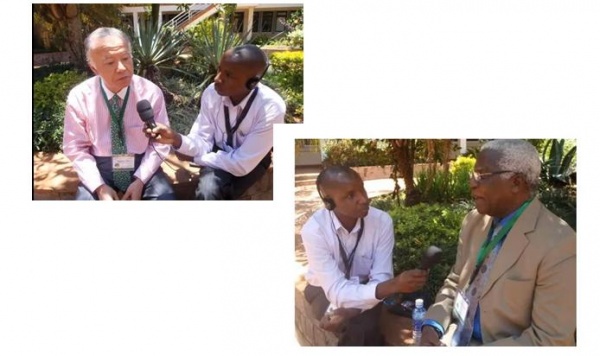 At the end of March 2012, Ms. Fumiko Nakao, Deputy Director of the IPSI Secretariat, transitioned to a new leadership position within the Ministry of the Environment, Japan. During her time with the Satoyama Initiative, she played a leading role in developing the concept of the Satoyama Initiative, establishing the international partnership and successfully guiding IPSI through its first two global conferences in Nagoya, Aichi, Japan and Nairobi, Kenya. In early April 2012, Mr. Wataru Suzuki joined the IPSI Secretariat as its new Deputy Director. Mr. Suzuki has a broad background including time spent working with national parks in the USA, and most recently focusing on issues surrounding IPBES. Building on the outcomes of IPSI-2 in Nairobi and looking forward towards the upcoming meetings later this year, Mr. Suzuki joins the Secretariat during a crucial period.

Two recent CNN news features have focused on the Satoyama Initiative and the activities of its members. Please take a moment to read about the efforts of Mr. Yoshimasa Koizumi (from new IPSI member Urato’s “Children of the Sea” Revitalizing Project) as he works towards rebuilding following last year’s earthquake and tsunami. The “Green Renaissance Project” is focused on the importance of ecosystem services for the sustainable rebuilding of satoyama/satoumi communities damaged during the 2011 earthquake and tsunami. The project combines the efforts of many organizations including several IPSI members (Tohoku University, CEPA Japan, EarthWatch Institute Japan). This article also introduces the Ink Cartridge Satogaeri Project and its support for the activities of the Satoyama Initiative. 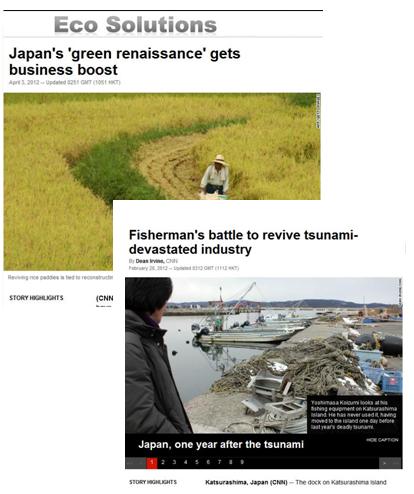