Organized by Environmental Protection Information Centre (EPIC) a member of the International Partnership for the Satoyama Initiative (IPSI), in conjunction with the Institute for Global Environmental Services (IGES), this workshop focused on participants’ experiences and brought together knowledge and good practices through presentations and dialogue. A study tour took the participants to three landing sites on the shores of Lake Victoria where they interacted with lake side communities, and tested the three fold approach of Satoyama Initiative; they also visited the Bujagali power Dam and the source of River Nile. The theme of the workshop was “Enhancing benefits for people and biodiversity in Socio Ecological Production Landscapes and Seascapes in Uganda”.

The full report of the workshop, prepared by EPIC, is available for download here: SINN workshop report23 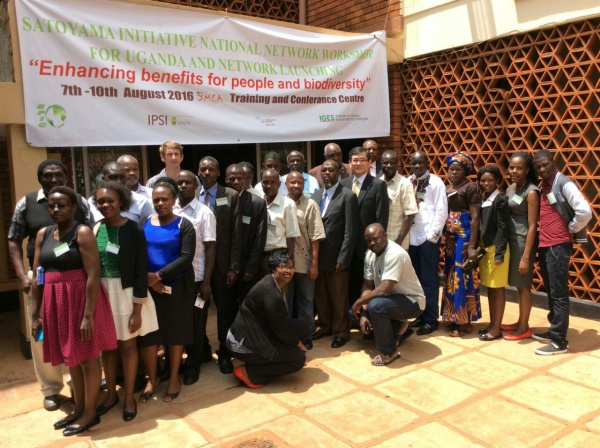 The Satoyama Initiative National Network Workshop for Uganda was the first of its kind in Uganda. It served to launch the Satoyama Initiative National Network for organizations and institutions working in SEPLS. The workshop introduced to participants the concept of Socio Ecological Production Landscapes and Seascapes (SEPLS) which is new to many organizations thereby promoting the global Initiative that seeks to realize societies in harmony with nature through revitalization and sound management of SEPLS, where biological diversity values and social aspects are integrated with primary production processes such as forestry, agriculture and fisheries.

The workshop was held at a time when Lake Victoria region is facing serious threats that have far reaching social and ecological repercussions. During the study tour Participants were able to interact with three lake side communities at three different landing sites in meetings that were pre-arranged. Through sharing the challenges fishermen and women encounter in their daily lives especially those associated with the predator Nile perch which was introduced in the lake by colonialists in 1950 and has devastated the population of indigenous fish species the Haplochromine Cichlids, adversely affecting livelihoods of people that depend on the lake as a source of food and income, besides causing loss of fish species diversity and disrupting the food chain for the entire aquatic life, participants were able to test the three fold approach of the Satoyama Initiative.

The Satoyama Initiative National Network Workshop therefore aimed to contribute to sustainable development in the country by strengthening the knowledge base related to SEPLS, as well as to share the concept of Satoyama Initiative more widely. This will help to create more shared understanding of issues related to SEPLS and promote more effective communication among participating organizations, and to identify effective ways for Environmental Protection Information Center (EPIC) the event organizer to contribute and develop networking in Uganda.

The workshop commenced on 8 August with opening remarks from the Chairman Board of Directors EPIC. This was followed by the Panel discussant Dr. Jerome Lugumira a soil scientists working with National Environment Management Authority (NEMA), who presented his paper on land management in mountainous and hilly landscapes. His presentation was followed by explanation on formation of working groups and discussions procedure, by the Executive Director of EPIC. Participants formed three groups for in depth discussions of issues facing Socio Ecological Production Landscapes and Seascapes and those working on their revitalization and sustainable management. The groups were formed according to ecosystems in which Participants carryout their activities. Three groups were formed namely: 1. Agricultural Landscapes, 2. Forestry, 3. Inland Waters and Wetlands.

On the second day participants were first briefed on the procedures of the meetings with lake side communities by the executive Director of EPIC and each group was allocated a facilitator and a note taker. The study tour was organized to enable participants test the three fold approach of Satoyama Initiative and it took them to three landing sites on the showers of Lake Victoria. Participants split into three groups and each group addressed one of the three fold approaches of Satoyama Initiative. The meetings with the communities were guided by three to four questions relating to a particular approach being tested.

After meeting with lakeside communities participants were treated to an excursion on the source of River Nile and the newly constructed power dam at Bujagali on the river Nile. The study tour gave participants a chance to reflect on the discussions they held the previous day and to see with their own eyes some of the threats Lake Victoria is facing and other ongoing conservation issues.

On 10th August Wednesday, groups reported back to the plenary through their representatives. One of the outcomes of the work- shop was a recommendation to lobby government to support conservation efforts aiming at restoration of the degraded biological diversity in Lake Victoria region and to enhance sustainable livelihoods of lakeside communities through eradication of the predator Nile perch.