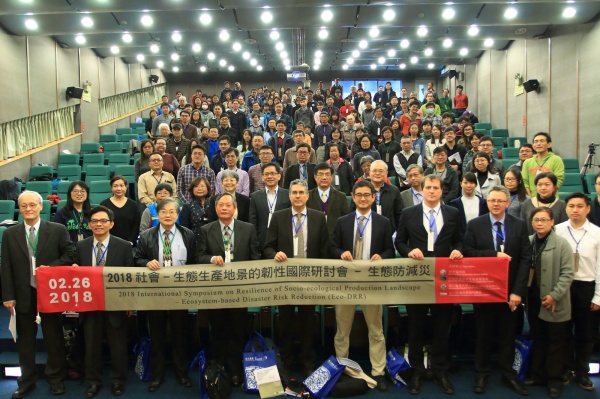 The “2018 International Symposium on Resilience of Socio-ecological Production Landscape – Ecosystem-based Disaster Risk Reduction (Eco-DRR)” was held at the Center for Condensed Matter Sciences of National Taiwan University in Chinese Taipei. The Symposium was organized by the Soil and Water Conservation Bureau of Chinese Taipei (SWCB), the Society for Wildlife and Nature (SWAN International), the Biodiversity Research Center of National Taiwan University, and the IPSI Secretariat, and was held as an endorsed IPSI Collaborative Activity.

The IPSI Secretariat’s Mr. William Dunbar  was invited to speak about “The Satoyama Initiative, IPSI, and Eco-DRR”, and emphasized the role of landscape diversity and a holistic landscape approach to resilience in avoiding and mitigating the negative effects of various types of disasters, including a number of IPSI Case Studies. Also speaking at the event were other experts on Eco-DRR and related fields from within Chinese Taipei and around the world. On 27 February, the guest speakers were also invited by SWCB and the other organizers to visit two communities in the field.

The event was covered by local media including at the Central News Agency (Chinese-language only).