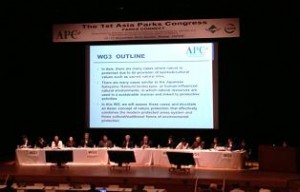 The 1st Asia Parks Congress (APC) was held in Sendai, Japan, to bring together people working with protected areas from around Asia. According to the APC website, “Scheduled exactly one year ahead of the 6th IUCN World Parks Congress, the Asia Parks Congress will serve as a valuable lead-in to the world meet by  proposing ways forward based on the lessons learned in Asia.”

Members of the IPSI Secretariat took part in the Congress in order to present outcomes of the International Partnership for the Satoyama Initiative (IPSI) and participate in APC Working Groups, input comments from the Working Groups for the next World National Park Congress, organize a side event by Tohoku University and UNU-IAS, and to collect information related to the Satoyama Initiative.

Thanks to our members’ participation, the final comments of their Working Groups clearly stated the importance of satoyama and SEPLS for supporting biodiversity and human well-being, and of the Satoyama Initiative and IPSI for promoting the sustainable use of natural resources as a complement and alternative to conventional protected area approaches, including the word “satoyama” as an effective area-based conservation approach.

A side event was held on the evening of 15 November entitled “Post-disaster Restoration and Revitalization: Approach of Satoyama and Satoumi in the Urato Island.” The event was co-hosted by Tohoku University and UNU-IAS, and featured presentations by representatives of Urato Island, which was badly affected by the March, 2011 earthquake and tsunami, about damage to the island and rebuilding efforts, as well as an explanation of rebuilding efforts of SEPLS including local nature, culture and livelihoods in Urato Island.