Working for the Living in Harmony with Nature, Aichi’s Efforts toward Ecosystem Networking

The Aichi Targets of the Strategic Plan for Biodiversity 2011-2020 adopted at the tenth Conference of Parties to the Convention on Biological Diversity (COP10) in 2010, to achieve address the underlying causes of biodiversity loss by mainstreaming biodiversity across government and society, the vision of this Strategic Plan is a world of “Living in harmony with nature.”
Aichi prefecture decided to host the Conference of the Parties to the Convention on Biological Diversity, and launched specific efforts based on the Aichi Natural Environment Conservation Strategy drawn up in 2009.The Aichi Natural Environment Conservation Strategy was developed to achieve harmony with nature and the sustainable development of this region.
The underlying objective of the Aichi Natural Environment Conservation Strategy is to “seek reconciliation between ecosystem conservation and regional development”. To fulfill this objective, new efforts have been made by combining “ecosystem networking” and “compensatory mitigation.”
If a region-wide natural environment were to become divided and isolated by urban development, the ecosystem specific to the region, which provides habitats for living creatures, would be at risk.
Ecosystem networking is intended to reconnect divided and isolated natural environments by properly arranging greenery and aquatic areas to facilitate the movement of living creatures, in order to conserve and restore the unique ecosystems of the region.
Recently, efforts to build biotopes have been gaining momentum at schools, corporations, local communities, and other entities.
The biotopes need to be arranged so that they serve as part of a region-wide network, while taking into consideration the unique ecosystem and the current situation of the surrounding areas.
The objective is not to simply bring back living creatures to the environment. It is necessary to conserve and restore the unique natural environment.
We believe that ecosystem networking enables us to rediscover the traditional landscape and culture of the region.
We consider it is necessary to promote collaboration, while holding discussions among various stakeholders in the region to design ecosystem networking and reflect it in community building at the regional level.

We prepared Aichi Biodiversity Potential Maps to be used in discussions on ecosystem networking.

These maps are based on data encompassing waterside environments and forests that are essential for living creatures to survive, taking into account the characteristics of target living creatures.

Potential maps have been prepared based on 16 species of animals and vegetation maps.

The potential maps are intended to raise public awareness. Specifically, residents of Aichi are expected to learn about the potential habitats of living creatures in their communities. Meanwhile, business operators and local government staff should realize that civil engineering works can be adjusted to increase living creatures.

This is a potential map for the damselfly. 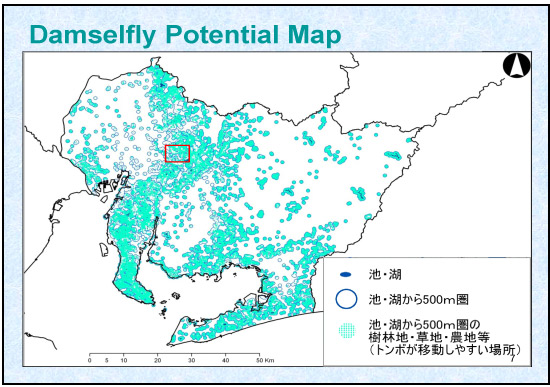 Potential maps are produced on a scale of 1 to 100,000. The blue patches show ponds and lakes. The blue lines mark a radius of 500 meters around ponds and lakes. Thus, if a circle overlaps another, the distance between ponds is less than one kilometer. The areas in light blue represent green spaces where damselflies can travel.
To promote ecosystem networking for damselflies, the zones that are not in light blue need to be connected.
However, buying land is a tough choice, and it is important to consider how to use public land effectively.
The patches shown in pink represent public land including schools and parks.
It is assumed that a biotope made up of waterside environments and greenery is built here; a route can be established for damselflies.
Public land is not necessarily limited to land for public use. Networking can be promoted by utilizing such spaces as university campuses, green belts on the sites of factories and business establishments, roadside trees, river banks, and household gardens.

(2) Using the Potential Maps for The Formation of Ecosystem Networks
We have a project to promote ecosystem networking by using the Potential Maps. Specifically, these maps of potential habitats for living creatures are used to develop a prefecture-wide biodiversity master plan, and then efforts will be made to carry out the plan.
To do this, we need to develop pilot projects and gain expertise based on results and analyses. Three areas in the prefecture have been chosen for model projects.
The first area is Nagoya’s eastern hills, which are characterized by the traditional landscape of typical Tokai hill land elements. This urban area model is intended to restore the ecosystem in the developed area.
The second area is Chita Peninsula, which is one of Japan’s three major areas with reservoirs and still has more than 1,000 reservoirs.
This Satochi model is intended to attain harmony between people and living creatures, as symbolized in “Gongitsune,” the name of a fox, the main character of a work written by Nankichi Niimi, who was born in Chita Peninsula and wrote children’s stories.
The third area is man-made coniferous forest in the Yahagi River Watershed. Man-made coniferous forests will deteriorate if they are abandoned or not properly maintained by thinning and other activities. This Satoyama model is intended to strike a balance between maintenance and neglect.
Efforts are also under way to turn the coniferous forests into broad-leaved forests to help conserve the ecosystem without maintenance.

These are some activities in Nagoya’s hills, as an example.
This area spans about 20 kilometers in the east-west direction, from the Higashiyama Forest located in the eastern end of Nagoya City to the Kaisho Forest located on the edge of Toyota City. The former Expo 2005 venue, now called Moricoro Park in commemoration of the expo, is located here.

Figure2 shows that the 20 kilometer area in the east-west direction is dotted with 22 campuses of 18 universities. 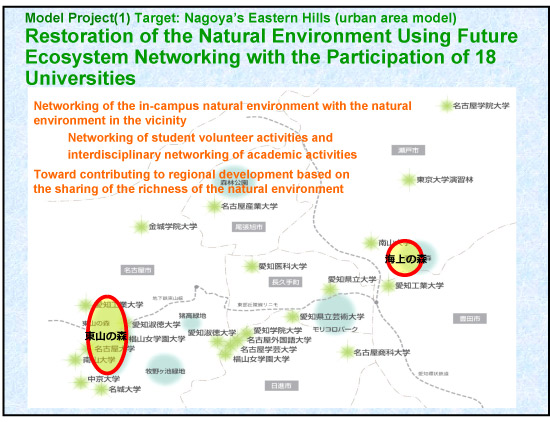 These campuses serve as “time capsules” to conserve forests, marshlands, and reservoirs retaining the traditional landscape of this region.
The project is intended to promote ecosystem networking by connecting the natural environment remaining on these campuses with the natural environment in the vicinity such as the Higashiyama Forest and the Kaisho Forest, to help restore the traditional landscape comprising Tokai hill land elements. In addition to networking the natural environment, the project aims to encourage networking of volunteer activities by students of the l8 universities, as well as the academic activities of the university faculty involved in research and education. The project is also designed to contribute to regional development by sharing the richness of the natural environment via collaboration among local corporations, residents of Aichi, and regional governments.
The project is an interdisciplinary effort involving the collaboration of experts in biology, eco-business, civil engineering, as well as experts in landscape designing from among the faculty of art universities.
We believe that harmony between people and nature does not simply mean to increase the number of living creatures, but to create a culture that fully values living with, and working and learning with nature.

This is a divided ecosystem. 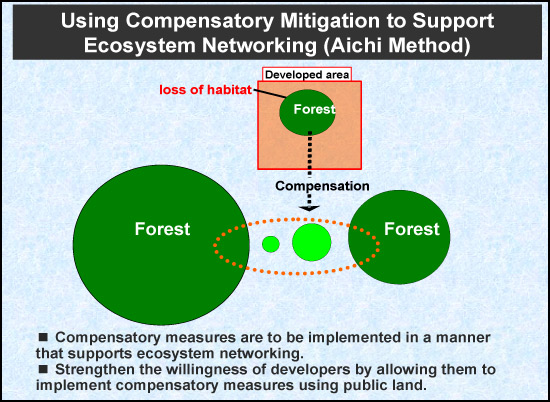 A natural environment, as shown in the red square, is located near the forests. The area shown in the red square is subject to development activities.
Basically, compensation is ensured within the development area. If the compensation is not enough, loss of nature is compensated by using the space that connects the divided ecosystems. This method employs spaces that are available free of charge, including schools, parks, and green spaces on the premises of corporations.
Under this framework, development activities paradoxically promote ecosystem networking, which helps increase the mass of biodiversity. In addition, compensation is facilitated by using spaces that are available free of charge.
We believe that a challenging spirit is required to reconcile conservation and sustainable use.

Along with the ecosystem networking model project, Aichi Prefectural Government launched a three-year project in 2010 to develop compensatory mitigation.
This project will establish guidelines for residents of Aichi, corporations, and regional governments based on the results of the model project.
We would like to spread prefecture-wide ecosystem networking and compensatory mitigation, and embody the concept of harmony with nature.

The residents of Aichi, industry, academia, and government started to take action with greater environmental awareness, which encouraged collaboration among these sectors on an equal footing.
We also believe that this manufacturing region can address global biodiversity issues. For example, global warming is a major threat to biodiversity. In the manufacturing industry, energy conservation and commitment to a low-carbon society help to conserve biodiversity.
Another major threat to biodiversity is changes to the natural environment due to the collection of natural resources. In this context, the promotion of recycling and commitment to a recycling society help to conserve biodiversity.
Energy conservation in production processes reduces the input of natural resources, as does recycling. Production in Japan is highly energy- and resource-efficient compared with other major countries.
Aichi is the manufacturing center of Japan, and boasts one of the highest levels of resource productivity in the world.
This means that Aichi’s industries are a model for contributing to harmony with nature by taking advantage of the world’s leading environmental technologies.

We believe that efforts should focus on the three goals of “seeking harmony with nature,” “supporting the clustering of energy-efficient industries,” and “making greater use of recycled resources.”
These efforts will help build a “Sustainable Aichi.”
Aichi will work hard to achieve a sustainable society and set an example for the global community through the collaboration of industry, academia, government, and residents of Aichi.

The approach of Ecosystem Networking establishment restores greenery at schools, parks and business establishments, green belts on the roadsides, and river banks to the local environment used to be there. If Satoyama areas and farmlands which have been conserved by human beings for long time are now left untouched, this gradually leads to ruin in the ecosystem. We aim to restore and maintain these areas and regenerate the ecosystem. In addition, this approach contributes to the achievement of the Aichi Biodiversity Targets which is one of the outcomes of COP10. We will send this to the world as the approach for the co-existence with nature. 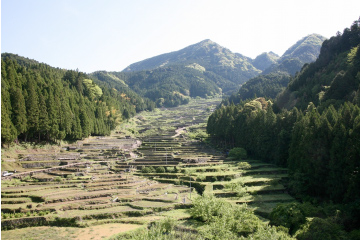 Working for the Living in Harmony with Nature,Aichi’s Efforts toward Ecosystem Networking