The sustainable use and biodiversity of paddies fields of Louisiana

The United States of America occupies the large continent, its climatic zone extends by the frigid zone from the subtropical zone, and it has a major mountain ranges, expansive prairies and vast rivers, and there are various natural environments. The U.S. is a major agricultural producer; much of its land is dedicated to farming for wheat, corn, soybeans, and other agricultural products, and the country harbors well-developed large-scale farming enterprises. The current paper presents a case study of efforts aimed at the sustainable use of secondary natural features and the conservation of biodiversity in a particular region of the U.S., in St. Martin Parish, Louisiana.

1. Overview of the site

Louisiana comprises about 130,000 square kilometers, roughly 110,000 square kilometers of which are land and 20,000 are water. About 57,000 square kilometers of that is forest. The northern part of the state is bordered on the east by the Mississippi River. The river then cuts through the southern part of the state, which faces the Gulf of Mexico. To the west it borders Texas, and to the north Arkansas. Louisiana has thriving agriculture, forestry and fishing industries. Its chief products include timber, rice, sugarcane and aquatic products (Louisiana is by far the world’s largest producer of crawfish). In addition to these, the state has well-developed chemical, petrol, and tourist industries.

Information in Louisiana was collected chiefly through interviews conducted from December 2 through December 11, 2009, in St. Martin Parish area. The surveys were performed by Mitsuhiko Toda and Takashi Inoue of the Japan Wildlife Research Center with the powerful assistance of Stefan Ottomanski of Nagao Natural Environment Foundation.


The term “working wetland” in Louisiana refers to the fact that the state’s wetlands (paddies) serve multiple functions: they are used to cultivate rice and harvest crawfish, and also provide waterfowl habitat. In St. Martin Parish, for example, farmers allow crawfish cultivated in paddies to be fed on by birds, thereby using the wetlands in a sustainable way and preserving biodiversity in the area.

(2) Changes in land use in St. Martin Parish

The land subject to the current study was at one time a forest, and the grandfather of the current farmer/landowner originally made his living through forestry. With the construction of levies along the Mississippi River in the 1920s, it was transformed into a wetland, after which it was used for paddy farming. Subsequently, the crawfish that thrived in the paddies were used as a source of food, but in the 1960s, with the introduction of rice farming, the crawfish came to be cultivated for commercial purposes. In recent years, in light of unstable rice prices, crawfish are cultivated together with paddy agricultural products as a means to mitigate the business risks associated with growing only rice.

The farm in this case study is run according to the guidelines of the Louisiana Master Farmer Program. It consists of a roughly 400-acre tract of wetland that is used mainly for the paddy farming of rice. 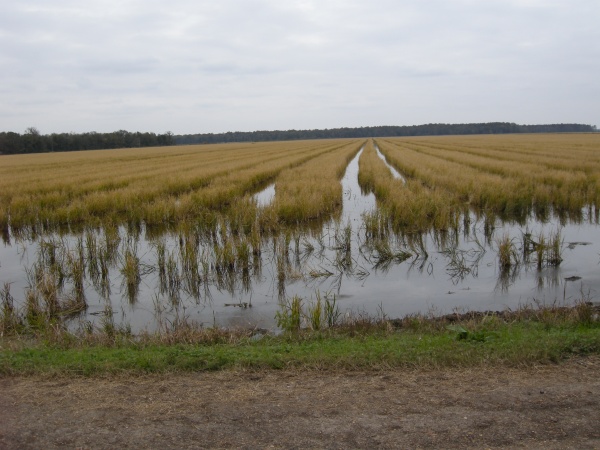 Rice cultivation begins in the spring (March); seeds are for the most part sown directly using a planting tractor, and occasionally using a small aircraft. Harvesting is done once or twice a year. The first harvest takes place in July, and depending upon how the rice has grown, there may be a second harvest, either in October or November. After seeds are sown, the water level in the paddies is maintained at a depth of two inches for about two weeks. This depth is not only ideal for wading birds (e.g. the American White Ibis; Eudocimus albus), it is also effective for controlling weeds. The water depth is raised to four to six inches in conjunction with the growth of the rice plants, and is drained just before harvesting. The water is delivered to the paddies via pumps from the settling ponds designed to let the silt that has runoff from sugarcane fields settle. 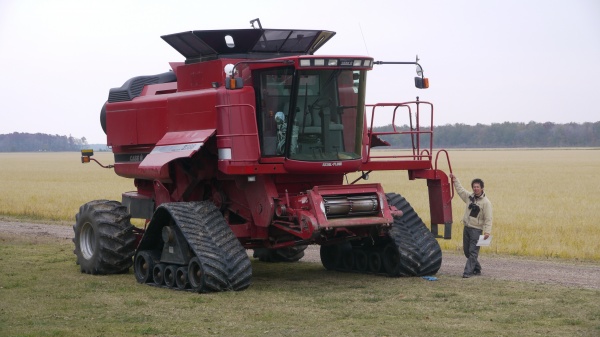 Rice is planted without tilling the land every year for three consecutive years, and is harvested around five times during this duration. In the fourth year the fields are filled with water and left to lie fallow, after which they are tilled and planted again. The rice produced is a long-grain variety that yields about 8,000 pounds per acre at the first harvest and 3,200 pounds in the second. The price for unprocessed rice is around 22 U.S. dollars a barrel.

Purchased crawfish Procambarus clarkii are released into paddies around May and June, when the rice planted in March has matured to a certain extent. Releasing crawfish into paddies at this timing affords them a certain degree of protection via the rice plants and lowers the levels of predation by waterfowl. The released crawfish reproduce before the first harvest. Crawfish grow by about 20 percent every time they shed their shells, but their maturation is affected by climatic and other conditions. The released crawfish grow by feeding upon aquatic insects and tadpoles that inhabit the paddies. They become cannibalistic when other sources of food are insufficient, so in the interest of maintaining a high level of biodiversity in the paddies, much care must be taken when using pesticides or fertilizers. Although the water is drained from the paddies immediately prior to harvesting, the crawfish survive the harvest by taking refuge in holes they dig in the paddy mud. 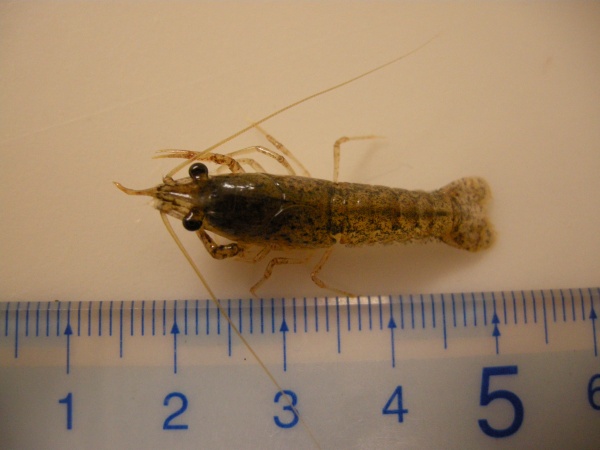 Crawfish are harvested after the rice, and the decision regarding whether to harvest rice a second time or harvest crawfish is made depending on factors such as the quality of the rice, rice prices, and crawfish prices. This sometimes means that rice is not harvested a second time. A crawfish harvest will generally yield 1,000 pounds per acre, with prices fluctuating somewhere between 30 cents to 3 U.S. dollars per pound.

Crawfish are harvested using specialized traps. Two types of traps with mesh sizes of about 2 centimeters are used so as not to capture crawfish that are too small. When water is added to the paddies, a screen is placed at the point of intake that keeps out bluegills and other fish that prey upon crawfish.

(5) Biodiversity of the paddies and surrounding areas

At the farm that was studied, much aquatic animals are used as source of food for human, including frogs (frequently found in irrigation canals and caught at night), American Alligators Alligator mississippiensis, Snapping Turtles Chelydra serpentina, etc. The Mourning Doves Zenaida macroura, Bobwhite Quail Colinus virginianus, and other birds are hunted for food. Many birds that are either predators or competitors to the crawfish have been observed in the paddies, and if one were to place emphasis only on the productivity of crawfish cultivation, such birds would be a nuisance. Despite this, at the site studied, paddies are used sustainably with the birds being allowed to feed upon the crawfish. Crawfish predators include herons, ibises,spoonbills, and gulls, while crawfish competitors include ducks and swans . 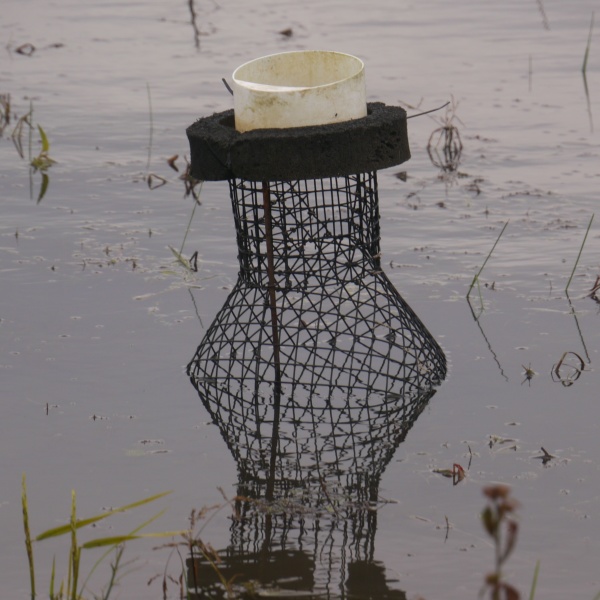 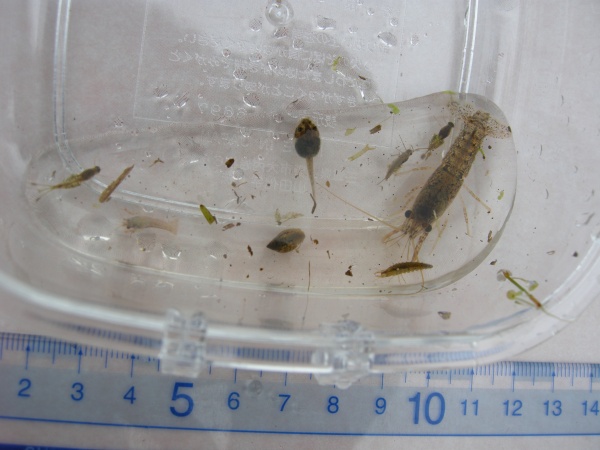 (1) The use of secondary natural resources in Louisiana

Natural areas have conventionally been converted into farmland based on the notion that nature is something to be conquered, but over the past two decades views of nature and ways to utilize it have begun to change. Large-scale sustainable farming is also gaining a foothold through decisions to plant crops other than corn, which imposes a significant burden upon the soil, on land traditionally used as cornfields, and to reduce or eliminate the use of pesticides and other agrochemicals. It should also be noted that the practice of hunting, which is a “consumptive” way of utilizing natural wildlife, is on the decline, while “non-consumptive” utilization, e.g. bird watching, is on the rise. 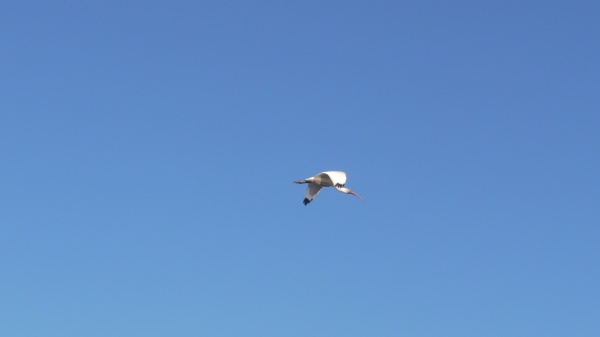 (2) Efforts at conserving or rehabilitating the natural environment

The main goal of the WRP is to conserve and rehabilitate wetlands to serve as habitats for waterfowl. The program is voluntary and operates under 30-year easements. The CRP, on the other hand, is chiefly a reforestation program with the goal of preventing soil erosion that targets areas ill-suited to farmland. In addition to these, there is also the Environmental Quality Incentives Program (EQIP), which provides farmers with incentives for improving the environmental quality of their land.

The Louisiana State University Agriculture Center is appealing to the government to offer support for farms, such as the one described here, that utilize and conserve wildlife and natural resources such as crawfish, waterfowl, and water (levels and quality). The conservation of biodiversity in farming should also raise the level of biodiversity in areas surrounding wetland farms in Louisiana.

About the Case Study

The survey described here was conducted by Mitsuhiko Toda and Takashi Inoue of the Japan Wildlife Research Center as part of a project commissioned by the Ministry of the Environment of Japan. Stefan Ottomanski of the Nagao Natural Environment Foundation lent his cooperation to the field survey, which was conducted between the 2nd and 11th of December 2009, and targeted St. Martin Parish in the southern part of Louisiana. Interviews were conducted with one farm operator who practices a method of farming that combines paddy rice cultivation and crawfish production (for commercial consumption) with efforts to conserve biodiversity in paddies. People associated with universities that are supporting the efforts of this farmer were also interviewed.