The traditional practice of cultivating rice paddies has been declining in Japan. The disappearance of rice paddies is not only a loss of cultural and agricultural heritage, but also the rich biodiversity. In 1997, Shumei International began cultivating traditional rice varieties using a Natural Agriculture approach on a 6-acre parcel, located in the Shiga Prefecture, resulting in the appearance of endangered plants and insects. The project included the revitalization of the surrounding forest area, increasing the health of the ecosystem.

Japan, located in East Asia, is made up of four primary islands: Hokkaido, Honshu, Shikoku and Kyushu. Shumei International’s 6-acre Natural Agriculture demonstration farm, Shigaraki No Sato, is located in the Shiga prefecture of Honshu island, east of the city of Kyoto.

In Shiga, forest covers about half (200,000 hectares) the total area of the prefecture, or about 60% of the land area.  Forested areas provide extensive value to the region, such as disaster prevention and timber production. Currently, an increasing number of forests in Shiga are ill-managed and devastated due to various changes in socioeconomic conditions and people’s lifestyles, risking a potential decline in the surrounding ecosystem.

The prefecture of Shiga is also home to Biwa Lake, Japan’s largest freshwater lake, which is about 670 square kilometers and takes up approximately 1/6th of the prefecture. The Lake was formed at least 4 million years ago[1] , and is one of the few ancient lakes in the world with fifty-seven endemic species reported[2]. Biwa Lake also attracts approximately 30 million tourists every year to the area due to its immense beauty and watershed culture[3].  The Lake Biwa Museum established the Biwa Lake Environmental Research Institute to promote environmental conservation activities and formulates environmental programs.

In April 2006, the Shiga Prefecture introduced a new prefectural tax to promote forest regeneration, placing a greater value on the close relationship between forests and Lake Biwa[4]. The Shiga Prefecture intends to use the tax revenue to encourage forest uses that promote citizen involvement and forest management that stresses environmental aspects of the public benefits of forests[5].

Like the forest of Shiga, Lake Biwa helps to maintain the diverse ecosystems in the region and protect indigenous species.  The lake was deemed as a UNESCO Ramsar Wetland (1993) in accordance with the Ramsar Convention, the purpose of which was to protect and sensibly use internationally valuable wetlands[6]. Rice paddies are considered human-made wetlands according to the Ramsar Convention which are critical to essential ecosystem services and biodiversity.

Rice paddies have traditionally been cultivated by people who live in and around wetland areas like Lake Biwa[7]. Japan has lost the majority of its wetland biodiversity as a result of industrialization.[8]  The existence of rice paddy farming helps in preserving the rich biodiversity in the area, providing habitats for insects, birds, fish and other creatures.

The Shiga Prefecture has a current population of more than 1.4 million people. The population has increased in recent years due to immigration and the growth of the manufacturing and technology sectors in the region.

Traditionally, most people living in Shiga practiced small-scale farming and lived closely with the land. However, in recent decades, industrialization and globalization has resulted in more young people working in technology and manufacturing jobs.

Land cultivation makes up for just one-sixth of the economy.  The vast majority (90%) of farmlands in Shiga are rice fields and most farms are small, producing only a slight income for farmers who depend on other sources of income.

Relationship between human beings and the natural environment

Inhabitants of the Shiga region have lived in harmony with Lake Biwa and the surrounding areas for centuries, and it has much cultural and spiritual significance for people living in this region[9]. It is commonly referred to as “Lake Country” and the surrounding watershed community has built a culture centered around living near the lake [10].

Due to an aging population, youth migration to urban areas, and the transition to industrial agriculture, many rice paddies and farmlands in Japan, have been neglected and the traditional way of life has been impacted. As the rice paddies and wetlands are abandoned and deteriorate due to unsustainable farming practices, the biodiversity and health of the ecosystem are also affected. Creatures which live in the rice paddies are harmed by chemical pesticides and fertilizers as well as early harvesting practices on industrial farms.

In 1997, Shumei established Shigaraki No Sato as a Natural Agriculture demonstration farm to showcase farming as a way to live in harmony with nature which in turn inherently protects and supports the surrounding ecosystems.  The goal of the project was to introduce Natural Agriculture as a way of farming that could bring multiple benefits to the land as well as to the local community.

Shigaraki No Sato is bordered by mountains and forests in the area of Shigarakicho, Tashiro. The Tashiro River runs through the farmland. Shumei aimed to implement environmentally-sound agricultural practices to demonstrate a Satoyama lifestyle.

Natural Agriculture is an approach to food production, and a way of life in harmony with nature that encourages minimum intervention in the growing process. Natural Agriculture involves: the use of indigenous and natural seeds, the practice of seed saving, the cultivation of soil in its natural state without additives, such as fertilizers, pesticides or herbicides; a comprehensive understanding of the role of insects, neighboring plants and weeds and how balance is maintained. Most importantly, Natural Agriculture encourages an overriding respect for nature in which farmers and consumers recognize the interconnectedness of nature and work in harmony with natural cycles.

Through this project, Shumei International educates children and adults on how Natural Agriculture as a farming approach can not only protect and renew biodiversity, but also serve as a framework for living in harmony with nature. 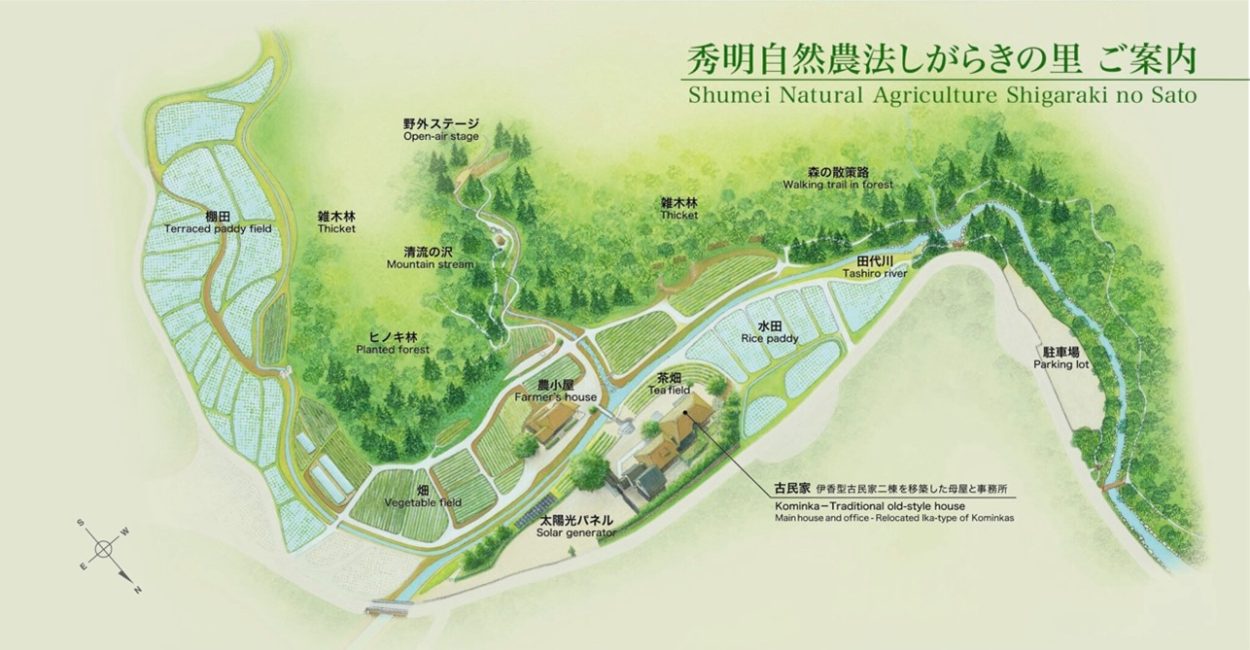 Shigaraki No Sato is a diverse project site on 6-acres of land. It includes terraced rice paddies, vegetable and tea fields, surrounding forests as well as two traditional Japanese farmhouses, where visitors learn about Natural Agriculture, reconnect with nature and explore Japanese culture. The Farmer’s house is used to train farmers in Natural Agriculture, for seed saving and to clean harvested produce.

To aid in restoring the natural landscape, Shumei thinned the forest trees in the surrounding hillsides, which was formerly cultivated for lumber.  This allowed light to reach the soil, promoting rejuvenation of shrubs and smaller plants in the area, increasing biodiversity and forest health.

On the 2 hectares (4.9 acres) of rice paddies, Shumei Natural Agriculture farmers planted two types of traditional rice varieties – Shiga Asahi (traditional short-grain rice) and Shiga Habatae (sticky rice). The rice is grown in a traditional way whereby it is planted without the use of any fertilizers or additives and harvested following the natural growing cycle. This involves allowing the rice to fully mature instead of harvesting it early which is now practiced by a majority of farmers in adapting to modern lifestyles. In addition, vegetables and green tea are also cultivated on the land following the Natural Agriculture approach.

The presence of Japanese honeybees has been declining in Japan, which is an indication of ecosystem imbalance.  However, the erasure of agri-chemical use at Shigraki No Sato has enabled the endangered Japanese honeybees to thrive in the area. In turn, the presence of bees helps with pollination of crops throughout the property which aids the environment in becoming increasingly verdant, fertile and revitalized.

Rice paddies are considered human-made wetlands, which have the capacity to restore and protect biodiversity in the same capacity as naturally occurring wetlands. According to the Ramsar Convention for Wetland Conservation, wetlands are critical in maintaining a healthy ecosystem and conserving biodiversity.[11] They are not only responsible for keeping aspects of the natural environment healthy, especially water regulation and purification, but the wetlands also help to absorb carbon emissions, impede adverse climate impacts, and reduce pollution in the atmosphere.

The produce from Shigaraki No Sato is used to offer a “seed to table” experience for customers at the Miho Museum’s restaurant, which is nearby the farm as well as a farmer’s market at the Miho Museum. This affords visitors to the museum and local community members the opportunity to understand where their food comes from and the importance of developing a relationship with local farmers.  They learn that a healthy environment is connected to their own health, gaining insight into the interdependence of life.

Between 2012 – 2018, Shumei initiated a series of research studies throughout Japan, including Shigaraki no Sato to determine the extent to which Natural Agriculture increases biodiversity and water purity in various landscapes. Several research studies and biological surveys were conducted by the former chair and founder of NPO Tambo, Mr. Shigeki Iwabuchi in cooperation with Professor Kazunari Yokoyama, soil microbiologist and senior researcher at the National Agriculture and Food Research Organization (NARO) and Mr. Nakanishi, Researcher, Shiga University.  Local community members from Shiga prefecture, including students and children, participated in the study, particularly in the collection of biological specimens.

Results demonstrated that Natural Agriculture was effective in revitalizing local ecosystems in comparison to conventional farms. The research explored the following indicators of healthy ecosystems: 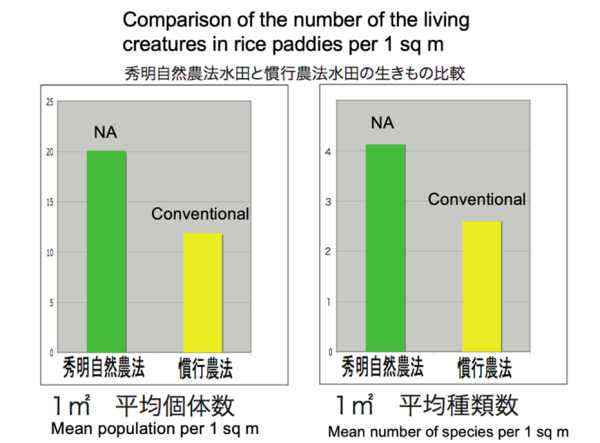 Study 2: Amount of dragonfly larva living in the rice paddies: 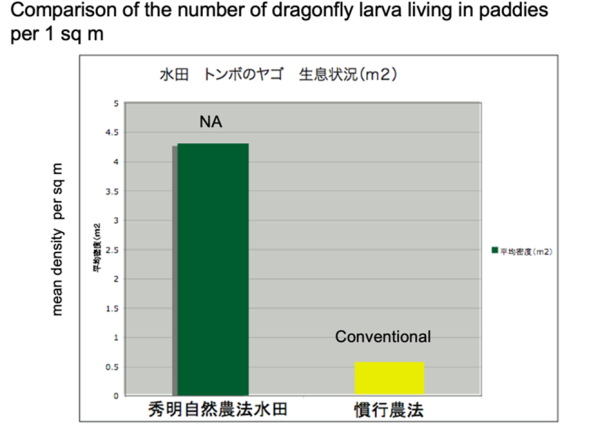 Study 2 measured the amount of dragonfly larvae living in the rice paddies as dragonflies and their larva are indicative of a healthy ecosystem. This is due to their high sensitivity to water quality in their natural habitat. Results demonstrated a much greater presence of dragonfly larva in the Natural Agriculture rice paddies in comparison to conventional rice paddies. 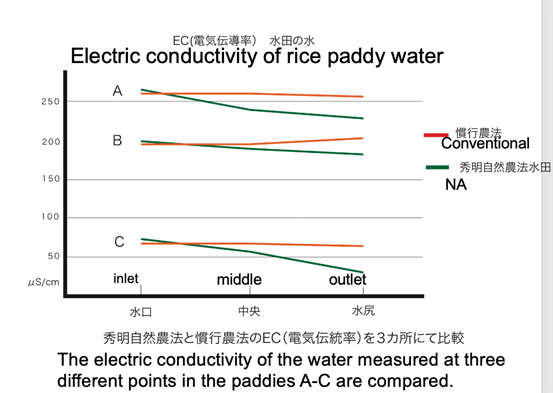 Water testing included water coming into the rice paddy (inlet), water in the paddy (middle) and water flowing out of the paddy (outlet).

The cleanliness of water was determined by measuring the conductivity of the water, or its ability to pass an electrical current. Research from the Environmental Protection Agency suggests that the more inorganic matter exists in water, such as chemicals and sewage, the stronger the conductivity in the water will be.[12]  Test results confirmed that the water which was measured at all three points in the Natural Agriculture paddy had low conductivity, an indicator of water purity and low contamination. 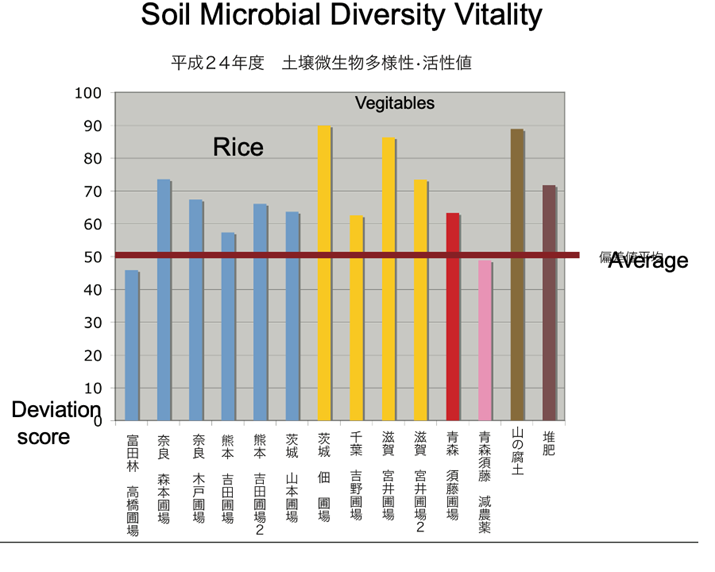 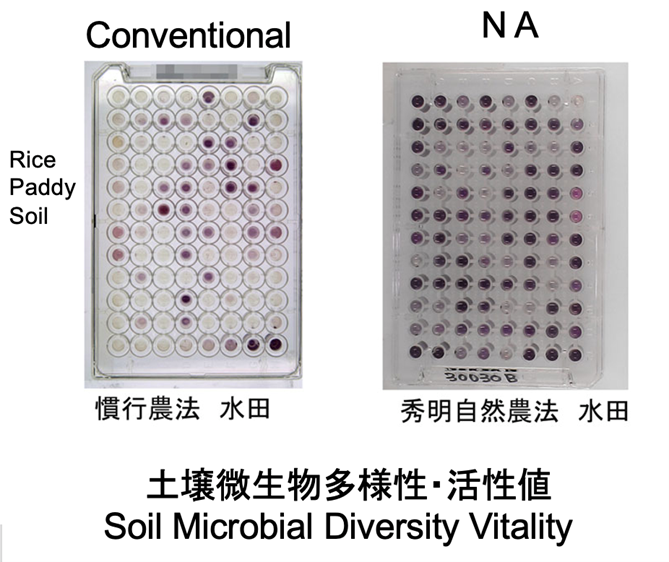 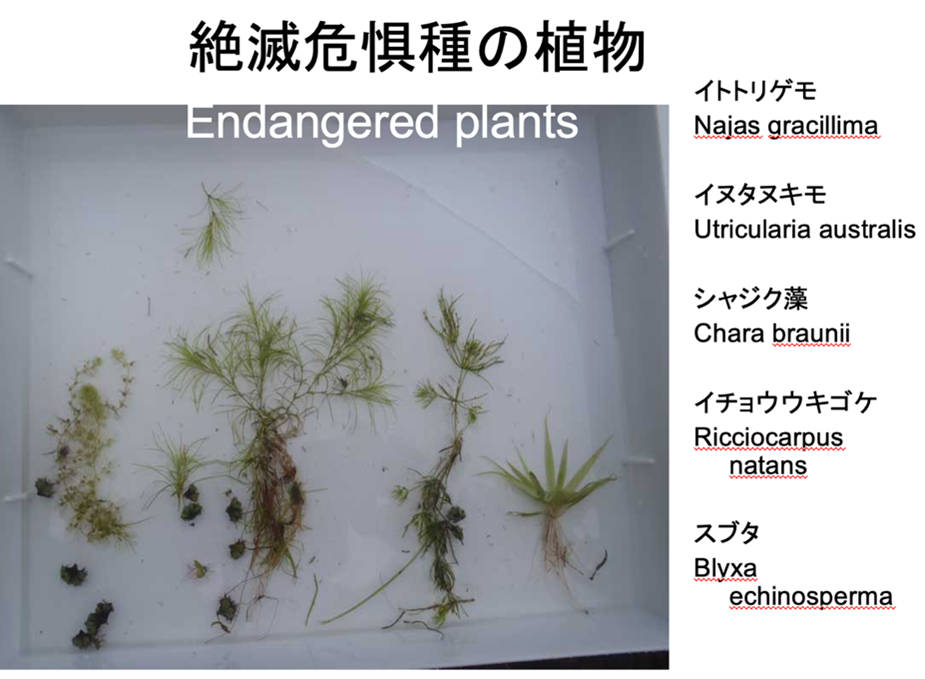 The Shigaraki No Sato farm demonstrates how the implementation of a Satoyama landscape approach in caring for the surrounding areas of the farm along with Natural Agriculture create an optimal environment for biodiversity to flourish. The farm not only avoided the use of any additives or chemicals in the growing process, but it also emphasized an overriding respect for Nature and the entire ecosystem. This established a holistic land management approach to restore the biodiversity in and around rice paddies and fields, which resulted in healthier soil, greater water purity and the protection and return of endangered species.

As a training facility and cultural showcase, Shigaraki No Sato provides an example of how traditional farming practices can be carried out in a way that supports the revitalization of rural areas while helping to restore biodiversity. The beautifully restored farmhouses and farmland create a place for community members to connect with Nature and renew their appreciation for living in harmony with Nature and the beauty in traditional Japanese farming culture.

Overall, Shigaraki No Sato demonstrates the benefits of farming in a harmony with nature in revitalizing ecosystems and local farming communities. It teaches farmers and consumers the positive impact of omitting the use of chemicals and additives from the growing process and helps renew their relationship with the land. As a result, Shumei Natural Agriculture farmers from Shigaraki No Sato are being invited to help revitalize abandoned rice paddies in the region, employing the Natural Agriculture approach to landscape management.