Reintroduction Project of the Oriental White Stork for Coexistence with Humans in Satoyama areas, Hyogo, Japan

The Tajima Region of Hyogo prefecture was one of the last breeding areas for the storks in Japan, where the last native storks were captured and taken into captivity before they disappeared in the wild in 1971.  However, Hyogo prefecture planned the reintroduction project of the storks for coexistence with humans in Satoyama areas (Committee for the Reintroduction of the Oriental White Stork 2003) and started the project in 2005.  Such a project with the goal of coexistence between humans and nature is rare case in reintroduction programs of the endangered animals of the world (Soorae 2010).

In this report, I will introduce the history of conservation, the reintroduction project, pilot release, status of breeding and dispersal, and coexistence with humans in Hyogo, Japan.

Hyogo prefecture extends from the Sea of Japan in the north to the Seto Inland Sea in the south, and further down to the Pacific Ocean through AwajiIsland.  The 135º east longitude fixes Japan Standard Time and runs through the central part of the prefecture.

Hyogo prefecture contains a rich variety of communities ranging from large cities to rural villages as well as isolated islands, and also has several diversified climatic and natural features. The Prefecture consists of five highly distinctive districts: Settsu (Kobe and Hanshin), Harima, Tajima, Tamba, and Awaji, each of which has its own unique history, climate, and industries.

Toyooka City of the Tajima Region is located in the north-east of Hyogo prefecture (fig. 1).  To its north is the Sea of Japan.  ToyookaCity is positioned about 100km from the Prefectural government (KobeCity). 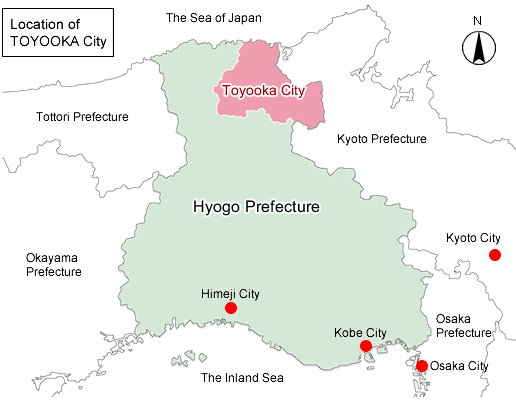 HISTORY OF CONSERVATION IN JAPAN

The storks were observed widely in Japan until the Edo Era (1603 to 1868), when the capture of the storks was prohibited by local domains.  The Japanese native population of storks decreased due to hunting in the Meiji Era (1868 to 1912), and became restricted to the Tajima Region (35.5N, 134.8E), northern Hyogo prefecture (fig.2) and the Wakasa Region, western FukuiPrefecture.

Hyogo prefecture prohibited hunting the storks in 1908 and the Japanese government designated the nesting area of the storks as a natural monument in 1921.  The Tajima population of storks recovered once but again decreased rapidly after World War Two.  The causes of the decline were the deforestation of pine forests used as nesting sites during the war, and the food shortage and health degradation from agricultural pesticides containing organic mercury, and the loss and deterioration of their habitats on land and along rivers after the war.  Furthermore, inbreeding depression might have accelerated population decline.  The last native storks were placed in captivity and disappeared from the wild in 1971. 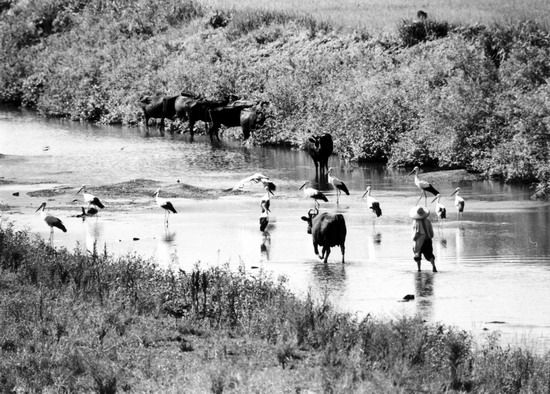 Fig. 2 Coexistence of humans with the storks in the Tajima Region in 1960, Japan (Photo by Fuji Kogeisya, Inc)

The Liaison Committee for the Reintroduction of the Oriental White Stork was organized with the participation of local residents and groups, academics, and governments in 2003.  Various efforts were made through discussion and collaboration among the related agencies that promoted environmental improvement, such as nature restoration in paddy fields and rivers, acclimatization of the storks to the wild, as well as popularization and education.

The basic policies of the project were as follows:

According to these policies, the following points were considered for realizing the project:

Promotion of the project

Furthermore, we referenced the points below according to the guidelines (IUCN 1998) while promoting the project.

We conducted a tentative release of Oriental White Storks between 2005 and 2010 to establish releasing and monitoring methods.  We released a total of 27 storks into the wild: seven adult birds (older than one year) in 2005, seven adults and two young birds (less than one year) in 2006, five adult birds in 2007, two young birds in 2008, two adult birds in 2009, and two young birds in 2010, of which three birds died due to a traffic accident, electrocution and starvation respectively, and four were placed back in captivity due to problems with their release, injury, and to avoid inbreeding.  Furthermore, one bird is missing.  A total of 19 birds were observed in ToyookaCity at the end of 2010.

After their release, we tracked the storks to collect data on their movements, habitats and behaviors by direct observation and satellite tracking (fig. 3).  We analyzed the phenological stage, ecological parameters, habitat use, and social relationships from such data. 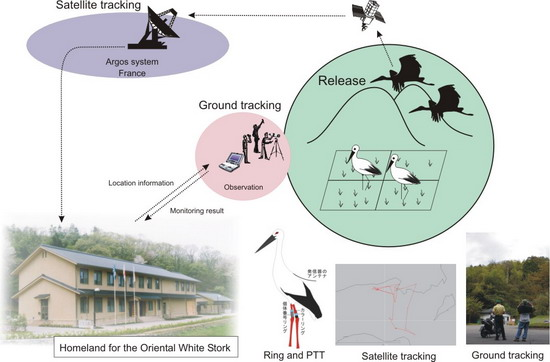 STATUS OF THE RELEASED STORKS

We released a total of 27 birds into the wild between 2005 and 2010, of which three birds died from a traffic accident, electrocution and starvation respectively, and four were placed back in captivity due to problems with their release, injury, and to avoid inbreeding.

There were a total of 19 observed cases of long distance dispersal by 12 storks until 2010.  One of them travelled ca. 700 km and another traveled for 49 days.  However, every stork returned to ToyookaCity, except for the missing birds.  A total of 20 birds remain in ToyookaCity as of 2010.

One pair formed in 2006, and seven pairs had their own home ranges in Toyooka City in 2010.  The first pair started breeding in 2006 and reared one chick successfully in 2007, which was 46 years after the last wild fledging in Japan.  The average of fledging success and the mortality of the stork population was 5.4 birds/year and 1.8 birds/year respectively, so the population grew, reaching ca. 40 birds in 2010 (fig. 4). 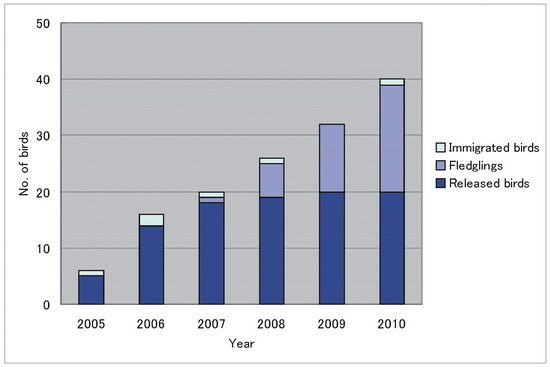 Fig. 4. Yearly change in the number of the Oriental White Storks in the wild

2) Dispersal of the young storks

A total of 26 young storks that were hatched in the wild  in Toyooka City left 50 times to visit the area from Tohoku to Kyushu, Japan (fig. 5).  The longest distance of dispersal was more than 700km from Toyooka City.  Most of the storks returned to Toyooka City, but several storks remained in other locations. 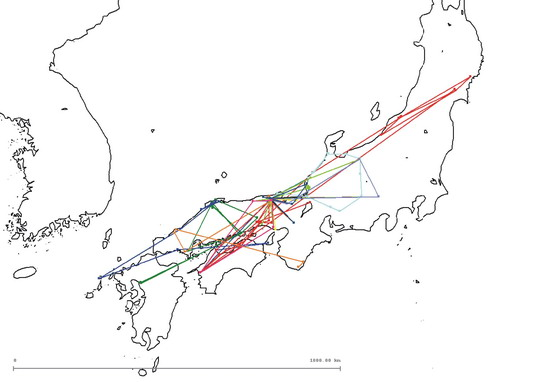 Fig. 5. Examples of long-distance dispersal of the young Oriental White Storks from 2008 to 2010

FOR COEXISTENCE WITH HUMANS

The Oriental White Stork can be considered a kind of natural resource, so we can use the storks for regional development and local vitalization.  The storks promote developments in tourism, the economy, agriculture, administration, culture and education of the region (Kikuchi 2006, Ohsako et. al. 2008).

The number of tourists that visited the Prefectural Homeland for the Oriental White Stork was around 140,000 people and increased after the release of storks in 2005.  The number reached almost 500,000 people in FY 2006 (fig. 6).  A large number of visitors revitalized tourism and accommodations in Toyooka City. 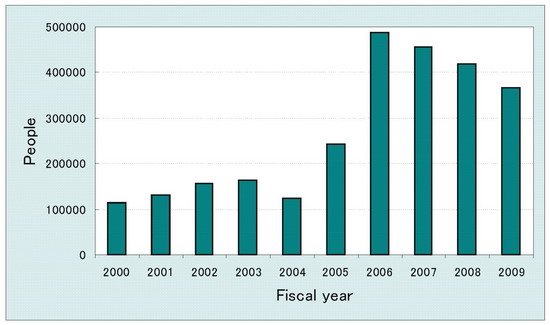 Fig. 6. Annual change in the number of tourists that visited the Eco-museum Center in the Prefectural Homeland for the Oriental White Stork, Hyogo

Toyooka City settled on the Strategy for Ecology and Economy in 2005 to promote communities where the environment and the economy resonated and generated synergy.  The aim was to create a recycling society ecologically and economically with the symbol of storks (Organizing Committee of the Third International Forum on Reintroduction for Oriental White Storks 2006).  Several projects were planned according to the subjects below:

Hyogo prefecture and ToyookaCity expanded agriculture, while creating habitats for the storks.  This method was called the White Stork Friendly Farming method to cultivate tasty rice and to support a diverse wildlife, while creating a rich culture, region, and environment that enabled storks and humans to coexist.  The elements for this plan are as follows:

By using this method and adapting to create rice paddies where it was safe for storks to forage, farmers could consequently grow an especially safe and healthy rice for local residents.  As such, they intended to build a region with understanding and support between the producers and consumers of rice, which in turn protects and fosters the regional culture and environment to pass on to future generations.  Farm products could also be sold at higher price despite the decrease in total production amount.

ToyookaCity has a catchphrase with the storks as a symbol for local activation: Toyooka – a hometown where people smile happily and storks soar elegantly.  The city settled on the Basic Environment Ordinance for Local Activation and Living Together with Oriental White Storks in 2002 and the action plan according to the ordinance in 2003.

Hyogo prefecture and the Japanese government planned to promote the nature restoration projects in rivers, rural fields and forests in ToyookaCity.  Artificial marshes, shallows and fish ways were made in rivers and streams.  Some paddies were reformed into marshes or filled with water, and fish ways, refuges and slopes were made in ditches along the fields.  The aquatic network was recovered for aquatic life among paddy fields, drains and rivers.  Pine trees and broad-leaved trees were planted, and cedar treetops were cut and reformed for storks to perch and nest on in rural forests.  The goal of these projects was to restore the habitats of the storks.

Japanese people lived in harmony with the storks in agriculture, forestry, tourism, entertainment, local knowledge and so on in the past.  The storks were considered as a part of the scenery and customs for the people (Kikuchi 2006).  Therefore, the storks were registered as a specially protected animal under the Cultural Properties Protection Law by the Japanese government, that is, the storks were a kind of cultural property.

The Eco-museumCenter for Oriental White Stork was established by ToyookaCity in 2000.  The center promoted the stork reintroduction project and the coexistence of humans and storks.  Visitors can learn about the nature and culture of the Tajima region at the center.  Furthermore, a field museum and a stork museum are being planned by ToyookaCity and Hyogo prefecture.

The Oriental White Stork can be a good theme of environmental education because the storks are high on ecological pyramids.  People can learn about environmental conservation and the coexistence of humans and nature through the stork reintroduction.

The activities on education were planned as follows:

The Oriental White Stork could be good theme of scientific study because their coexistence with humans had many subjects not only in natural science (biology, agriculture, engineering) but also in social science (politics, economics, sociology).  We can approach different subjects through the stork reintroduction.  Many students and researchers of universities and institutes have come to study the stork reintroduction project.

Toyooka City encouraged and supported such students and researchers in transportation and accommodation fees through a program called the Scientific Study Support for the Stork Reintroduction.

PROMOTION OF THE PROJECT

The Liaison Committee for the Reintroduction of the Oriental White Stork consisted of not only administrative bodies and academics but also groups of concerned and local people (fig.7).  The committee coordinated collaboration between related projects and measures. 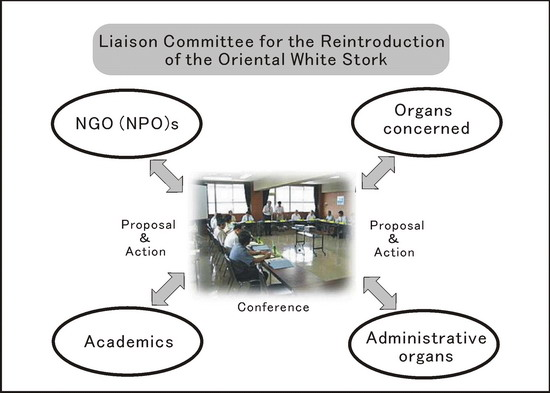 Fig. 7. Promotion system of the reintroduction project of the Oriental White Stork

The objectives of reintroduction may include enhancing the long-term survival of a species; reestablishing a keystone species (in the ecological or cultural sense) in an ecosystem; maintaining and/or restoring natural biodiversity; providing long-term economic benefits to the local and/or national economy; promoting conservation awareness; or any combination of these (IUCN 1998).  Satoyama areas are a hotspot of biodiversity in Japan.  The extinction of a keystone species, such as the Oriental White Stork means a decrease in biodiversity in Satoyama areas.  We should enhance biodiversity to reestablish the storks.  At the same time, we should develop the region using the storks with understanding by local people.

A reintroduction requires a multidisciplinary approach involving a team of persons drawn from a variety of backgrounds.  They may include persons from governmental natural resource management agencies, NGOs, funding bodies, universities, veterinary institutions, zoos (and private animal breeders) and/or botanic gardens, as well as government personnel with a full range of suitable expertise (IUCN 1998).  We need the cooperation of many people and organizations, and funding by governments to reestablish the wild population of the storks in Japan.  At the same time, we should promote the reintroduction project until the storks become a good partner of ours.

Ohsako Y., Ikeda H., Naito K. & Kikuchi N. 2008. Reintroduction project of the Oriental White Stork in coexistence with humans in Japan  In the proceedings of International Environmental Conference: “A Healthy Amur for a Better Life” pp.189-199.Khabarovsk.

Living in harmony with people

First Oriental White Stork born in the wild in 43 years