Protecting Biodiversity in the Philippines: A Community-based Sustainable Approach to the Use of Natural Resources

This project demonstrated the effectiveness of ecological agriculture and sustainable land management to improve the livelihoods of indigenous small-scale farmers and protect local ecosystems in the Sierra Madre rainforest in the Philippines. Beneficiaries received in-depth training on Natural Agriculture, which combines ecological farming techniques with traditional knowledge to cultivate crops from natural heirloom seeds without the use of agrochemicals or additives. The project provided technical support for the cultivation, processing and marketing of hibiscus (Roselle), a traditional herbal plant and its byproducts. Initially, the project was to include other crops, but the local community realized that Roselle had the most health benefits and was much better suited to the region and its climate. As a result, the project’s cost-effective ecological farming model provided a sustainable livelihood strategy for the indigenous people in the area (Dumagats) through the cultivation of a traditional plant that also protected the ecosystem by discouraging slash and burn practices, deforestation and the use of chemical fertilizers and pesticides.

The Philippines is one of the world’s largest archipelago nations located in Southeast Asia in the Western Pacific Ocean. Its islands are classified into three main geographical areas – Luzon, Visayas, and Mindanao. With its topography consisting of mountainous terrains, dense forests, plains, and coastal areas and the presence of a wide variety of species, the Philippines is considered one of the most biologically diverse countries in the world.[1]

Its location on the Pacific Ring of Fire makes Philippines extremely vulnerable to natural disasters, especially earthquakes, cyclones, and volcanic hazards. Long-lasting armed conflict in Mindanao and other parts of the country in conjunction with the increasing negative effects of climate change continue to hinder sustainable development and intensify poverty.[2]

There are considerable disparities in income and quality of life across regions and sectors in the Philippines. Twenty-six percent of the total population lives below the poverty line, including 10 million women. While the country is abundant in natural resources, environmental assets remain unavailable to impoverished communities due to exclusion, insecure land tenure, lack of access to technologies or resource degradation. Social inequities impact indigenous people, fishing communities, women and the informal sector the most. Indigenous people account for approximately 15 percent of the population and occupy an estimated 17 percent of total land area. The struggle to secure land or ancestral domains is a leading cause of instability for indigenous communities. In the 2013 Human Development Report, the Philippines scored 0.418 in the Gender Inequality Index, reflecting inequalities in labor market participation, political representation, and access to health services.[3]

The Sierra Mountains have the last remaining primary rainforest areas in the Philippines. It is the home of many critically endangered Philippine fauna including the Philippine Eagle (Pithecophagajefferyi), the Golden Crowned Flying Fox-Bat (Äcedoronjubatus) and the Northern Sierra Madre Forest Monitor (Varanusbitatawa).[4] It is considered a biodiversity hotspot due to the richness of the biodiversity of flora and fauna found there and because it is critically threatened by illegal logging and expanding agriculture at its borders. It is also home to different indigenous groups such as the Aetas and Dumagat. In Daraitan, Tanay, Rizal, the Dumagat population have been awarded the Certificate of Ancestral Domain Title (CADT).

The Natural Agriculture project site is located in Daraitan, Tanay, Rizal Province, approximately 16 kilometers (9.9 mi) east of Manila. Rizal is bordered by Metro Manila to the west, Bulacan to the north, Quezon to the east and Laguna to the southeast. The province lies on the northern shores of Laguna de Bay, the largest lake in the country. Rizal is a mountainous province perched on the western slopes of the southern portion of the Sierra Madre mountain range, which serves as a natural shield against typhoons coming from the Pacific Ocean. It encompasses 68 protected areas, including national parks, watershed forest reserves, natural monuments, marine reserves, protected landscapes and seascapes.  The Sierra Madre comprises a number of watershed areas that support agriculture, irrigation systems and power plants that supply urban settlements, including Manila.[5]

The local communities are adversely affected by environmental degradation and deforestation due to slash and burn agricultural practices, illegal logging and the contamination of water tables due to the overuse of chemical fertilizers and pesticides. Agricultural productivity, a main source of income, is negatively affected due to soil erosion and poor water and soil quality. Small-scale farmers sell their agricultural produce unprocessed and immediately after harvest, which forces them to accept low prices or risk spoilage. As a result, they resort to other income generating activities such as charcoal making, which in turn increases environmental degradation.  Communities need alternative sources of income that boost the value of agricultural products.

The objective of the project was to improve the livelihoods of small-scale farmers and indigenous communities in the Philippines by promoting ecological agriculture and sustainable land management practices through Natural Agriculture. In addition, the project incorporated capacity building around food processing, packaging and marketing to create additional sources of income for the farmers. Specifically, the project aimed to protect the rich biodiversity of the Sierra Madre mountain range by promoting the sustainable use of natural resources by improving the cultivation and processing of local agricultural products as an income-generating activity among the Dumagat population.

The project was a collaborative effort between local stakeholders in the Philippines and Natural Agriculture farmers from Japan. Shumei International provided technical training and support throughout the project and financial assistance for the construction of a processing facility. The Earth Day Network Philippines, Inc. (EDNPI) provided project management and the United Nations Development Programme (UNDP) provided financial assistance for organizing the Dumagat community, training and capacity building for the processing and marketing of the products and for the purchase of the necessary equipment. The University of Rizal, Sampaloc Campus, jointly with the provincial offices of Department of Science and Technology and the Department of Trade and Industry to deliver training on processing roselle into juice, jam and soap, as well as the necessary health and safety regulations. 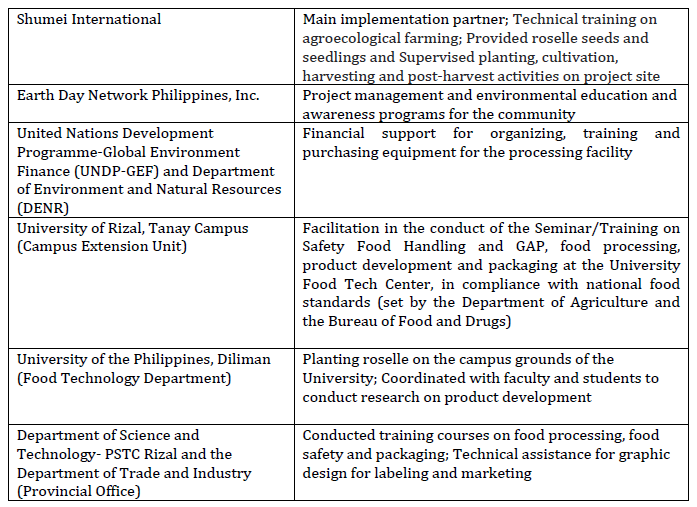 In the first phase of the project, more than 30 Sucatan Dumagat community members and their families learned about the environmental and ecological damage caused by the use of harmful chemical fertilizers and pesticides, and deforestation. They were trained on the Natural Agriculture approach and increased their knowledge of community-managed landscapes that integrated biodiversity conservation – particularly the protection of the soil biodiversity, contamination of aquafers, rivers and ocean. As a result, more than 6,500 roselle seedlings were planted and 9 hectares were cultivated through agroecological farming practices.

The cultivation area has been cleared and prepared for planting.

The roselle seedlings have been planted and are monitored closely throughout their growth cycle.

With the opening of a processing facility, project participants were also trained on how to harvest, preserve, process and market roselle and other products for urban market. By learning how to process roselle, project beneficiaries were able to increase the value of each harvest. Drying the roselle prolongs its shelf life from a few days to about two years. The dehydrated roselle calyx were processed into a range of products, such as jam, tea, juice, puree, candy, and soap. Participants also learned how to use kakawate (local tree variety) to create “living fences” in between their fields. The annual roselle festival provided an opportunity for the wider community to learn about the project, the Natural Agriculture approach and revive the demand for roselle, its byproducts and its many health benefits.

As part of the program, members of the community participated in an Environmental Governance workshop, which promoted comprehensive biodiversity conservation and management project implemented in the wider Lower Sierra Madre region. This helped participants learn from other community leaders and exchange ideas and best practice, thus providing vital capacity building opportunity.

Overall, the project contributed to poverty reduction, food security, sustainable livelihoods and local community development by helping farmers to plan effectively and introduce new sources of income. The communities were empowered by their new processing and marketing skills while also honoring their indigenous knowledge and practices to cultivate a traditional plant and promote its multiples uses and health benefits.

Once dried, roselle can be processed into a range of projects.

Project beneficiaries participated in a range of workshops, such as on how to make roselle jam.

Project beneficiaries were inspired to explore the sustainable development of products made from their local natural resources. Community members learned how to add value to their natural resources instead of selling them as raw materials on the local market.

Initially, the project planned multiple planting sessions for roselle. Due to the rainy season starting late, roselle could only be planted during the initial project launch, which impacted on crop yields. Severe weather events caused by climate change are increasing in terms of frequency and severity, including in Rizal. While Natural Agriculture can facilitate better planning, make crops more resilient and offer alternative sources of income, it does not represent a panacea in times of global climatic change.

This project was an example of multi-stakeholder participation and collaboration in a project that that involved the cultivation, processing and marketing of local agricultural products to create a sustainable source of income for indigenous communities. The approach to agriculture ensured the responsible use of natural resources and protection of ecosystems and recognized the importance of the natural biodiversity and traditional knowledge of the Dumagat people in the Sierra Madre region. As a result, the project was able to contribute to improving the community resilience through poverty reduction, food security, a sustainable livelihood and community development.

Antonio De Castro is project director of Shumei Natural Agriculture Farm in Tanay, Rizal, Philippines. Prior to joining Shumei in 2011, he was Director of Conservation International (Philippines office) and Director of the Center for Renewal Resources and Energy Efficiency. Antonio holds a B.A. degree in Comparative Literature from University of California, San Diego and has completed Master’s degree coursework in Social Ecology at University of California, Irvine in the USA.

Elizabeth P. De Castro, PhD is corporate secretary of Shumei Philippines. Together with her husband, Antonio De Castro, she developed and implemented the UNDP-GEF project. She also helped organize activities in the indigenous peoples’ communities. She is a retired Professor of Psychology at the University of the Philippines.