Physical and natural characteristics of the Rwoho forest

[Note: this case study originally appeared in the publication “Socio-ecological Production Landscapes and Seascapes in Africa“.]

The Rwoho Forest Reserve is located in Rwampara county of Mbarara District, Isingiro County of Isingiro District, and Ruhama County of Ntungamo District, in southern Uganda (Figure 1) The Rwoho Central Forest Reserve covers an area of 9,073 ha and is managed by the National Forestry Authority (NFA) on behalf of the Government of Uganda, based on the National Forestry and Tree Planting Act 8/2003.

The forest is located in a series of rounded ridges at an altitude of 1,800 m above sea level (Photo 1). The sides of the ridges are very steep, sometimes reaching 45 °. The narrow valleys between the ridges have almost level floors with slopes of <10 °, where drainage is impeded. The underlying rock comprises weathered phyllites, argillites, and arenites of Karagwe-Ankolean age, capped above 1,800 m by a sheet of laterites, which frequently contains clay and is often stained by iron salts. Peat is commonly found underlying the clay in valleys. Soils on the ridges are deep and fertile. On the flanks of the ridges, the soils are 0.5–1.0 m deep, well drained, and dry out only during severely dry seasons. Narrower ridges and steep slopes contain extremely thin, gritty soil or none at all, whereas landslides and erosion in some cases expose the bedrock. The valley bottoms contain deep dark soils, which are permanently moist, even during the dry seasons.

All rivers within the Rwoho Forest drain southwards into the Kagera River, and from there into Lake Victoria. The minimum average daily temperatures for Mbarara town for the period 1960–1993 was 17.3 °C, and the maximum average daily temperature for the same area was 26.6 °C. Analysis of the temperature trend showed an increase of approximately 2 °C over the period. The temperature for Rwoho is expected to be slightly variable due to differences in altitude. Monthly rainfall figures show that there are two annual peaks during March/April and September to November, with the driest period occurring from June to August. The mean annual rainfall is 917 mm. The area is occupied by two vegetation communities (c 1964) classified as type D3 (Albizia Markhamia forest, 45 km2, 50%), and the other is classified as type Q4 (Themeda Chloris grass savanna 45 km2, 50%). These occur on hill tops, ridges, and hill sides, and are maintained by frequent outbreaks of fire. The forest is partially degraded, mainly because of its proximity to communities and the easy access they have from all sides.

Natural forests occur in the valleys, with abundant species occurring in almost pure stands in some places. For example, in the Rwanduru valley, Markhamia lutea (mushambya) is established, whose yellow flowers are a feature of the forest, whereas Celtis africana is dominant in Rwabaranda. Swamp forest is found growing around small swamps in the valley bottoms, dominated by Mitragyna rubrostipulata and Syzygium guineense, whereas papyrus and other Cyperaceae spp. grow on the water. The current plantation area of Rwoho Central Forest Reserve consists of 12 compartments, covering approximately 1,580 ha. The plant viable area is comprised of 1,548 ha. The species planted are mostly Pinus oocarpa, Pinus caribaea and small areas of Eucalyptus grandis and Cupressus lusitanica. 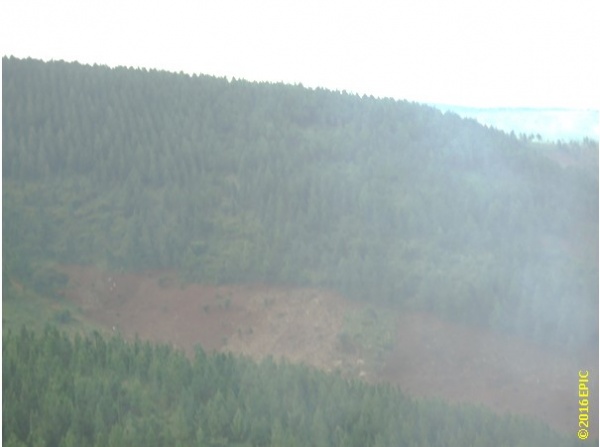 No valuation of the reserve has been conducted and as such, there are several attributes that are underreported. However, the potential total portfolio includes, but is not limited to timber stocks, natural forests and woodland biomass (Photo 2), nontimber products such as minerals, water catchments and hydrological services, and provision of habitats for both plants and animals. The area also provides grazing for livestock. Cultivation of cash and food crops is conducted in the forest reserve by forest edge communities. Rwoho forest supplies saw logs to the market. The market for most of the sawn timber is Kampala, the capital of Uganda (300 km away). 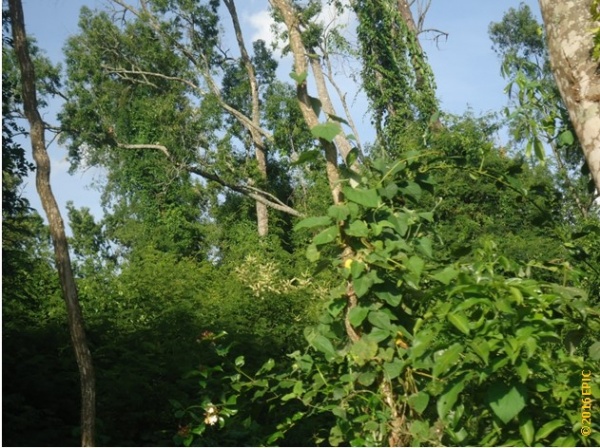 The local demand for forest products is growing as the urban areas of Mbarara and stability of the neighboring countries (Rwanda and Congo) provide opportunity for supporting a sizeable forest industry. The dependence of the local communities on the reserve is visible from the products they require for livelihood sustenance. The main requirements by different stakeholders include water for people and animals, fuel wood for domestic use, local herbal medicines for people and animals, timber for local and commercial sale, poles for domestic and commercial construction, grass for grazing animals, poles for tool handles, weaving materials, soils and sand for building, mushrooms and vegetables for domestic use, and charcoal for sale in urban areas. The National Forestry and Tree Planting Act 8/2003 requires that NFA manages the reserve in close collaboration and consultation with the different stakeholder categories. 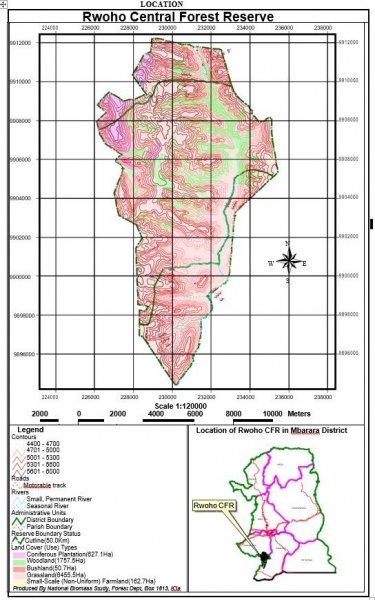 Rwoho Central Forest Reserve serves an important watershed role. It is the source of the Mishumba River that flows through the drier south east to meet the Kagera River. Kagera River flows into Lake Victoria, emerging as the River Nile. Land use changes within the watershed can have far reaching repercussions on the fresh waters of Lake Victoria and is one of the sources of nutrients that fertilize Lake Victoria, causing eutrophication and pollution. In particular, phosphorous attached to soil particles is carried by runoff from crop fields and artificial fertilizers from large-scale agricultural estates. Although plantations of exotic species sequester carbon, the indigenous, broad leaved species are more effective species as carbon sinks.

Wildlife resource composition of the forest reserve is not well documented. Historical documentation was mainly concerned with zoological pests. Among the faunal heritage documented to date are small mammals, birds, butterflies, and moths. Large mammals include buffalos, baboons, lions, and occasional elephants. These did considerable damage early during the establishment of plantations in the area. However, human pressure and grazing threatened and eliminated these animals to the extent that the present threat to young crops originates from domestic animals only.

The forest reserve is experiencing prolonged dry seasons and increased temperatures. This affects mainly plantation establishment, particularly young plants and seedlings in the nurseries. Crops in fields of adjacent communities fail due to lack of sufficient rain. Decline in crop yields is causing food insecurity and forcing forest edge communities to engage in illegal activities within the forest reserve, such as charcoal burning, in order to earn a living.

Fire outbreaks are caused by encroachers who carry out illegal activities in the reserve. The main sources of fire are wild honey harvesters, cattle keepers who burn the bush to regenerate grass for grazing, and disgruntled individuals that start fires to damage the forest. The fire destroys both the plantations and the natural forest belts, causing financial loss and loss of biological diversity.

The fact that plantations are established on steep slopes of up to 45 in some places makes it ecologically vulnerable to erosion. The outcrops lack the thick undergrowth that control runoff and the impact of rainfall on soils. When the trees are harvested, the slopes are left bare and are prone to soil erosion and landslides. Soil infiltration and water holding capacity of tree plantations are less compared to that of natural forests. Flooding and soil erosion are becoming a phenomenon in the watershed, which defeats the objective of reforesting the Nile Basin. Sedimentation and fertilization of fresh waters in the Nile basin are major threats in the Lake Victoria ecosystem.

Poor farming practices are accelerating soil erosion, which leads to sedimentation and silting of water sources. Monoculture tree systems of exotic species cause loss of biological diversity of species and habitats. Plantation establishment requires clearing of land by use of fire and treatment with herbicides and pesticides. These practices are environmentally unfriendly and are direct causes of pollution in water sources in the watershed, besides being a health hazard to local communities. Tropical forests host a high percentage of global biological diversity. However, monoculture tree systems are not forests, implying that biological diversity is underrepresented in the reforestation activities of the Rwoho Central Forest Reserve.

Given the remoteness of their communities in relation to towns and transport infrastructure, this limits livelihood options of communities living adjacent the forest. Cultivating on unprotected marginal land causes loss of soil nutrients through runoff and soil erosion, leading to poor crop yields (Photo 3). Forest communities are forced to abandoned these sites and encroach on the forest reserve. The process is unsustainable, in that the cleared land in the forest is also ecologically fragile, and the soils lose nutrients the moment vegetation is removed, forcing farmers to move on to virgin land in the forest.

In terms of practical measures to address the many threats facing the Rwoho forests as a socio-ecological production landscape, a number of actions can be highlighted.

Payment for carbon credits is one of the environmental services from which NFA and forest adjacent communities have benefited. According to the Chairman of Rwoho Environmental Conservation and Protection Association (RECPA), Mr. Jerome Byesigwa, their association received carbon credits payment of 11 million Uganda Shillings in 2014. RECPA is a community based organization that is participating in the NFA/World Bank Nile Basin reforestation project that earns carbon credits under the United Nations Clean Development Mechanism (CDM). However, it is imperative to state that timber production to meet the market demand and need for carbon credits revenue generation are overriding the good intentions of reforestation of the Nile Basin. The current project activities overlook the costs of losing biological diversity and the vital role played by riparian natural forest belts in regulating temperatures and halting nutrient loading in rivers and streams through filtration. Therefore, the decision to establish Pinus plantations for timber production in the Nile Basin requires urgent review with regard to the magnitude of the biological diversity crisis in the Lake Victoria ecosystem. There are other, more suitable sites for timber production.

A number of proposed interventions are being suggested by EPIC based on its many years of engagements with different stakeholders. They include:

i) Raise public awareness on the status and values of biological diversity and the dangers associated with environmental degradation in Rwoho SEPLs.

ii) Support and replicate the application of the Vetiver grass hedges technology for soil and moisture conservation, for the treatment of all crop fields and marginal lands, to improve crop yields and prevent runoff from carrying sediment and nutrients into rivers.

iii) Support communities to establish riparian natural forest belts along rivers and streams in the watershed to control nutrient loading through filtration.

v) Research and documentation of biological diversity in the Rwoho SEPLs.

vi) Promote and market carbon credits derived from conservation of natural forest belts, best practices in agriculture, and from the Vetiver grass hedges technology, to enable the wider community to contribute to carbon sequestration activities and to benefit from carbon credit sales.

vii) Contribute to local, national, and international policy processes aimed at enhancing the status of biodiversity conservation in Rwoho.

viii) Advocate for a co-management system of natural resources that includes all stakeholders.

ix) Support the under-privileged, especially women, in their efforts to overcome shortages of fuel wood and other tree products, through skills development and establishment of small group tree nurseries. In addition, help them to acquire land in the forest reserve under the Collaborative Forest Management arrangement, where they can raise indigenous, multipurpose tree species of their choice.

Langdale-Brown I, Osmaston HA & Wilson JG 1964, The vegetation of Uganda and its bearing on landuse, Government of Uganda, Entebbe, Uganda.