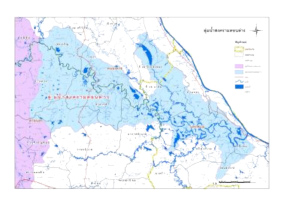 The Lower Songkhram River Basin encompasses a broad range of wetland habitat types associated with a functional floodplain ecosystem, linked to the Mekong River. Annual extensive flooding phenomena are dependent on in-basin precipitation and a backwater effect from the Mekong which in some years shows a marked backflow. The river supports a remarkably productive capture fishery, which peaks each year during the flood recession period, supporting the livelihoods of numerous families locally. The site is notable for holding one of the last extensive areas of seasonally-inundated riverine forests in the Mekong Basin.
The floodplain wetland site supports several rare and threatened fish species, including five species on the IUCN Red List, and is an important resting and feeding site for migratory birds on the East Asian Flyway. The area is generally poorly studied for most major taxa and data is sparse.

The Lower Songkhram River Basin encompasses a broad range of wetland habitat types associated with a functional floodplain ecosystem, linked to the Mekong River. Annual extensive flooding phenomena are dependent on in-basin precipitation and a backwater effect from the Mekong which in some years shows a marked backflow. The river supports a remarkably productive capture fishery, which peaks each year during the flood recession period, supporting the livelihoods of numerous families locally. The site is notable for holding one of the last extensive areas of seasonally-inundated riverine forests in the Mekong Basin.
The floodplain wetland site supports several rare and threatened fish species, including five species on the IUCN Red List, and is an important resting and feeding site for migratory birds on the East Asian Flyway. The area is generally poorly studied for most major taxa and data is sparse.

Communities located on or near the Songkhram floodplain exhibit a high degree of reliance on wetland-derived products for their livelihoods. Villagers generally are engaged in multi-component livelihoods, which vary by season and availability of particular wetland products. Agriculture is of less importance locally than is generally assumed by outside agencies, thus leading to inappropriate development priorities and misallocation of resources. In particular, local people are engaged in a mix of the following wetland dependent activities:

The ecology and local history of the seasonally flooded forest in the Lower Songkhram Basin research has found that the Lower Songkhram area has been the home of many different ethnic groups for a long time, as a consequence of the rich natural resources and the location, which has long been a transport route between the extensive Sakon Nakhorn Basin and the Mekong River.
The first groups that traveled to the area were the Khmer (called by the local as Khom) and the Laos. The Khmer traveled by Kra Sang boat along the Mekong and its tributaries for trading items of silver ware, gold ware, and swords, while the Lao from Savannaket and Khammuan traded their rice in exchange for salt from the SongKhram valley.

During World War II, Vietnamese people moved to some of the large towns along the Mekong in Thailand. Some of them worked with trading boats traveling along the Mekong and its tributaries, including the Songkhram.
There have been many other ethnic groups from Northeast Thailand and Laos who have relocated to the area such as the So, Lao, Nyaw, and Chinese. These groups moved either to the existing communities or established new communities. They fished, farmed in the flooded forest, traded and worked on commercial boats.

Accordingly, the communities where the research has been conducted are historically linked to the different ethnic groups who moved to the area at various times. The summary of each community is as below:

The economy of communities in the Songkhram basin has been connected to communities in other areas for a long time, through merchants who traveled along the Mekong and its tributaries. Local Songkhram villagers in the seasonally flooded forest have traded their products such as fermented fish and dried fish with rice, salt and chili from upland communities. They also sold dried fish at some festivals and ceremonies such as annual Thay Phanom pagoda festival.
In the early 1940s, there were Chinese sailing ships plying the river selling rice and chili, and purchasing fermented fish from the area to sell in communities along the Mekong in Nong Khai, Mukdahan, Ubon Ratchathani, and on the Lao banks of the river and even as far as Srisaket province on the River Mun.
In 1950 a new road was built connecting Sri Song Khram and Tha Utane districts, minimizing the role of river navigation. More and more merchants started using the road for their trading activities. Later, as roads improved and trucks were introduced, it became possible for buy fresh fish, vegetables, bamboo shoots, and mushrooms from the Nam Songkhram basin for selling in many other areas.
Apart from fish, cattle and buffalo have long been important for the local economy. The seasonally flooded forest and surroundings of the lower Songkhram have served as the largest grazing plains in Sakon Nakhon basin. Villagers in the lower Songkhram basin have traded cattle with Thai people in Central and Eastern Thailand for over a century. Presently, they trade cattle and buffalo in the local livestock markets only, but large livestock remain a vital possession for the villagers.

The 420 kilometers of Songkhram River is a most fertile river basin. In the lower reaches, stretching up to 200 kilometers from the mouth of the river, there is a seasonal flood forest where annual floods cover an area of approximately 500,000-600,000 rai for three to four mouths during the rainy season. Very similar to the Tonle Sap of Cambodia, in the rainy season the lower Songkhram receives floods derived from upstream runoff and backflow of the Mekong River.
Part of the unique nature of the lower Songkhram river basin is the flood resistant forest (Known in Thai as Pa bung Pa Thaam) comprising many tree and shrub species, including a dominant pioneer bamboo species called Pai Gasa, in the flood area and on the banks.
The complex wetland ecosystem of the lower Songkhram river basin consists of 28 different sub-ecosystems, hosting diverse plants and aquatic organisms. These sub-ecosystems are only revealed in the dry season as the flood waters recede. The sub-ecosystems provide important fish habitats particularly for spawning, such as the flooded forest, creeks (Known in Thai as “Huay”), oxbow lakes (Known in Thai as “Gut”) ponds, pools (Known in Thai as “Wang”) and rapids (Known in Thai as “Gaeng”). The abundance of fish in the Songkhram depends largely on the complex interacting relationships between annual floods, recession and natural flow patterns, the extent and quality of flooded forest and the variety of local sub ecosystems.
The Thai Baan researchers identify 208 kinds of plants and fungi, 124 fish species, 6 turtle species, 4 shrimp species, 10 mollusk species, 4 crabs, and 6 aquatic insects.
Out of 124 fish species, 115 species are native fish. There are 58 fish species that can be found in the Songkhram River all year round. There are an additional 57 species of migratory fish that migrate from the Mekong River, including the Mekong Giant Catfish. The species migrated to the Songkhram River during the flood season to feed on aquatic weeds, invertebrates and saline clay soil in the flood forest. According to a community note, a number of Mekong Giant Catfish were caught at Kud Takla on the Songkhram River in 1952 and 1953, with a maximum weight of 270 kilograms and have been caught in decreasing numbers ever since. The last Giant Catfish caught was recorded in 2003.
The relationship between the Songkhram and the wider Mekong ecosystem, for example 2 specimens of the White-eared Eel were found during the Tai Baan Research. This is a species of eel that migrates to inland waters along the Mekong from the ocean where it spawns, and has also been found by Tai Baan researchers in the Mun River Basin and Chiang Khong in northern Thailand.

The current situation of the Lower Songkhram Basin

The local economy is still heavily dependent on products originating from the seasonal-flooded forest including fresh and fermented fish, wild plants and cultivated vegetables and large livestock. The number of families who own cattle or buffalo has increased; while the number of animals per household has decreased due to communal grazing plains often being occupied by agribusiness ventures. In the last three decades several large agribusiness ventures have established a presence in the area, buying up large amounts of land at cheap prices and occasionally encroaching on common land, which had led to many instances of conflicts between local communities and the companies, some of which have ended up in the courts.

There are 79 kinds of traditional fishing gears, but eight of them are no longer in use. A number of large scale commercial fishing gears were introduced by the newcomers to the communities and widely adopted over the last 40 years or more.
For agriculture in the seasonal flooded forest and surroundings, there are various kinds of rice cultivation including lowland paddy fields and terraced rice fields. The rice is produced mainly for household consumption. In some years if conditions are right, high yields are possible and villagers can get a reasonably high income from selling rice.

There were once 47 different varieties of rice grown by villagers. Following introduction and promotion of commercial high yielding rice varieties by state agencies the number of varieties has fallen. Currently there are only seven varieties of native rice grown in the area. The villagers also grow various kinds of vegetables for household consumption in upland fields and along the river banks during the dry season.

An important concern coming out of the research is the decline in productivity of the seasonal flood forest as the result of the use of destructive commercial fishing gear, coal making, and commercial farming operations owned by agribusiness companies. They use significant amounts of chemical fertilizers and pesticides in their farming practices leading to reported instances of fish kills around the intensive farming plantations and concerns about human health risks.

At sub-district level there is a fishing auction system run by local administrative organizations to raise funds for community development locally, reflecting insufficient funds provided by the state. This may lead to over-fishing in the area. The productivity of the lower Songkhram River has been further impacted by dam construction upstream. The dam head ponds created have raised water tables that may cause salinization around the surrounding area and kill riparian vegetation.

The degradation of the seasonal flood forest is affirmed by the increasing number of local fish species that are becoming rare, or that might even already be extinct. There are 41 fish species that are nowadays considered to be rare and 11 fish in the Songkhram River for over 50 years. These locally extinct species are migratory fish that migrate between the Songkhram and the Mekong.
Amidst the environmental crisis in the Songkhram basin, the villagers have tried to solve the various problems that have arisen. For instance, they have set up many fish conservation zones, establishing community rules prohibiting destructive fishing gears, and building habitats for fish. Local communities have taken on these management responsibilities themselves. These activities have been supported by district state agencies and temples.

Local community management activities have ensured equity with poorer people being allowed to fish in conservation zones on some occasions. Importantly, it was found that a type of fish conservation by the community has been practices for a long time in the form of “sacred areas” where access to fishing is restricted, but is still respected by villagers.

The research in this area has generated a wealth of information on the ecology and livelihoods in the basin. Local people have led and carried out every step of the research-identifying research issues and questions, gathering and analyzing data, and producing final reports. The research is based on local knowledge and experience, and displays local people’s sophisticated understanding of the area’s ecology, as well as their capacity to manage their natural resources. 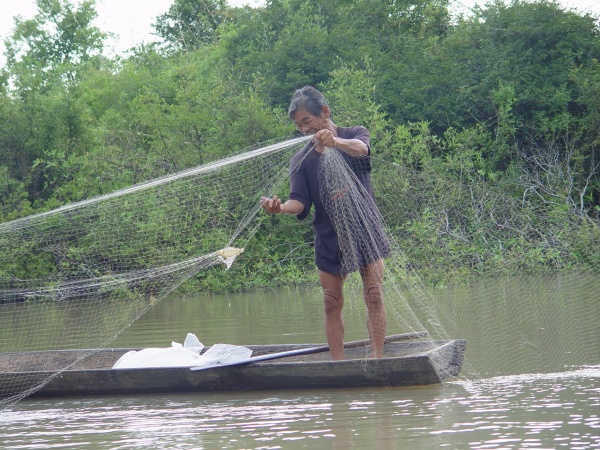 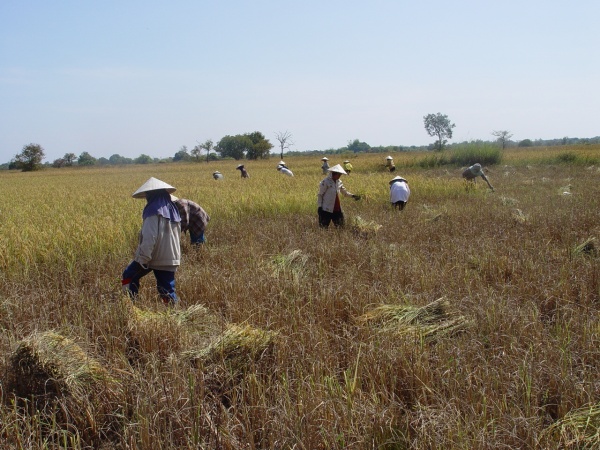 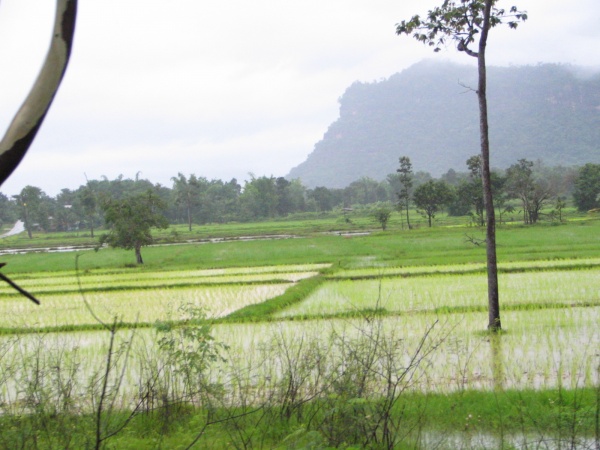 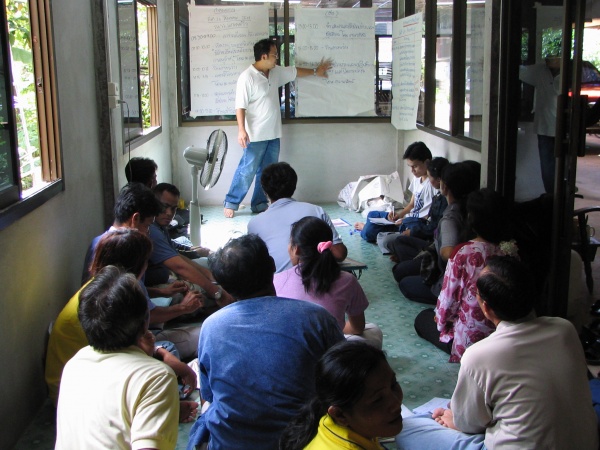