In addition to subsistence activities such as farming, fishing and gathering food from forests, in recent years the residents of the Solomon Islands have been making their livelihoods by obtaining cash through activities such as selling marine resources and crops and working for logging companies.

This article explains the details of the use of various natural resources (both land and sea-based) and ingenious ideas for conserving the environment. Then, based on this information, the features of Satoyama-like landscapes in the Solomon Islands, and the direction that should be taken in order to achieve sustainable human-nature relationships are discussed. 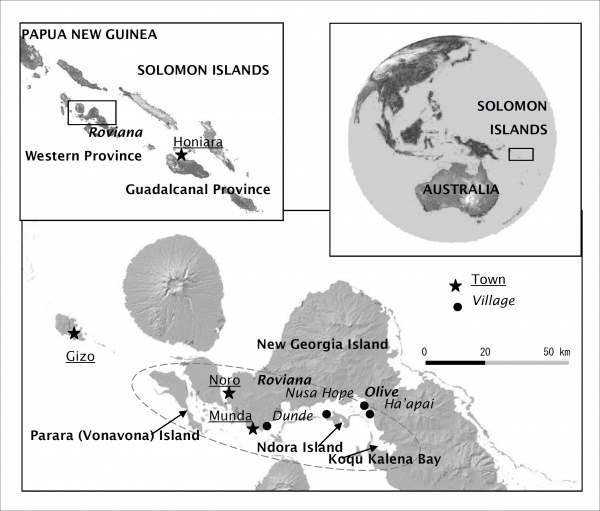 The Solomon Islands consist of six relatively large islands and more than 900 small islands. The population consists of approximately 410,000 inhabitants (from the 1999 census), of which 90 per cent are ethnically Melanesians and the remainder Micronesians, Polynesians, etc. In total, 88 per cent of the land is customary land belonging to clans. Furthermore, about 80 per cent is forested (FAO 2007).

Information gathering was carried out mainly in the form of interviews in a village named Olive on New Georgia Island of the Western Province from October 30 to November 6 2009. (The researchers stayed in the village for three days, from November 1 to 3.) In addition, further information was collected from members of the Western Province parliament, Forestry Ministry officials (at the provincial office), and non-governmental organization personnel who work locally in the conservation and social development sectors.

1. Landscapes and Various Uses of Land and Sea Resources

The residents use the land on New Georgia Island (main island) and on barrier islands located off the coast of the mainland. They believe that vegetation and soil in each type of island are different. 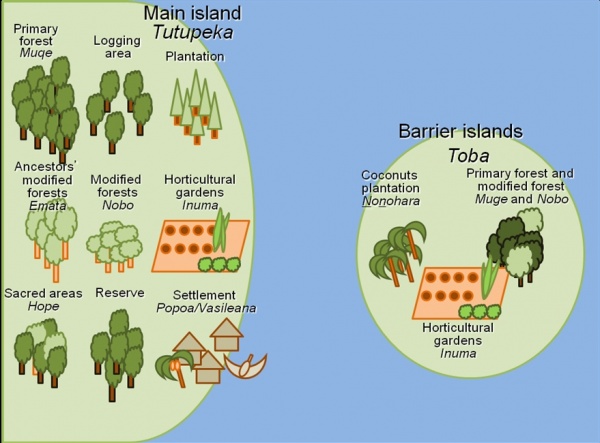 Figure 2. Classification of land use in Olive village (Credit: JWRC)

The following is a summary of land and natural resource use on the mainland, the barrier islands and in the sea

(a) Vegetation in the Settlement

The most useful plants in the settlement are either domesticated or semi-domesticated, and are used for food, luxuries, tool materials, ornamental materials, shading materials, etc. The most abundant plants are betel nuts ( Areca catechu), coconuts ( Cocos nucifera), a domesticated species of Barringtonia edulis which yields edible nuts, and sago palms( Metroxylon spp.) which are used as material for roofs and walls.

For the residents of the area, shifting cultivation is the main mode of subsistence. There is no particular season for preparation of horticultural gardens, because both temperature and rainfall vary little throughout the year. Main crops are sweet potatoes and cassavas. Other than potatoes, vegetables such as aibika ( Hibiscus manihot), ornamental/ritual plants such as Cordilyne terminalis, and plants such as coleus, which deter pest animals, are grown.

Modified forests which have been abandoned after shifting cultivation are called Nobo, where the residents gather medicinal plants, such as Mikania cordata and milkwood pines ( Alstonia scholaris), trees for building house, such as Commersonia bartramia, or materials to secure rafters and roofs such as rattan ( Calamus spp.).

In order to differentiate from Nobo, which are more than several decades-old (sometimes more than one hundred year-old), modified forests are called Emata, and were deforested and then abandoned before the current residents were born. Some gigantic trees such as Canarium, from which the residents harvest edible fruits and resin for wax, are the indicator for the residents to know whether the forests were once modified by humans. Many of those forest areas that the ancestors used to inhabit or for rituals are now “shrines ( Hope),” where entry and felling are often prohibited. 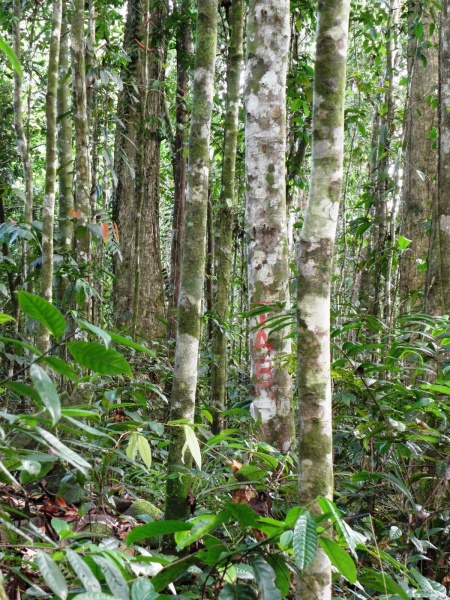 Picture 1. Sacred Forest Photo by Takuro Furusawa Note: “Tabu” (“taboo “in Pidgin) is painted on trees to inform logging companies that the area is sacred.

Note: “Tabu” (“taboo” in Pidgin) is painted on trees to inform logging companies that the area is sacred.

Primary forests are called Muge, where trees ( Gmelina moluccana) are sometimes collected for canoe-making. These trees are ideal for material for canoes because the trunks are light, grow straight, and have high water repellency. This makes it hard to find these trees and there are rules as to how to utilize them, which will be explained later. Also, these forests are often used for wild boar hunting.

Among the vast forests that the residents classify as Muge, some evidence of modification by humans can be found (Bayliss-Smith et al. 2003). Therefore, Muge are not totally unmodified, but partially contain human-modified parts where the ancestors once lived, and also they include forests in which the current residents have intervened.

There are two forests called “ reserves” near Olive. They are nature reserves established by local leaders in the 1970s when the current settlement was built. Although logging by foreign companies and agricultural cultivation are both prohibited there, the residents are allowed to cut down trees for their own survival and to take non-wooden materials such as Parinari glaberrima, the fruits of which are used as adhesives to fill holes in canoes. Vegetation in reserves is different from both unmodified and modified forests described above, as the residents have been utilizing useful trees continuously.

The barrier islands’ soil and vegetation are different from the main island’s. While the main island’s agricultural fields are managed through a shifting cultivation system with a short cultivating period and a long fallow period, the barrier islands’ fields are cultivated almost all the time. According to Furusawa and Ohtusuka (2009), the average period of continuous cultivation is 29 years on the average, and the fallow period is nine years. 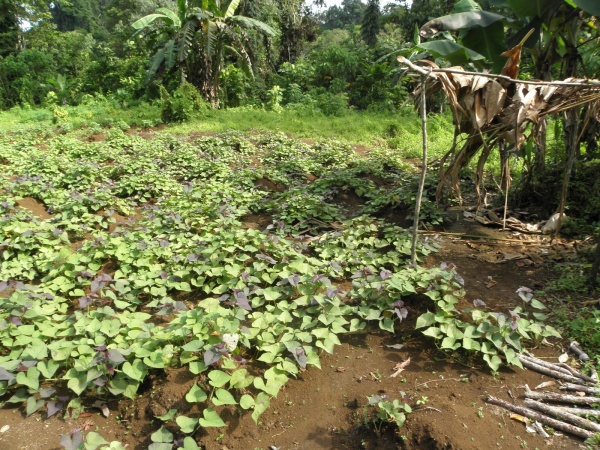 Picture 2: An agricultural field on a barrier island Photo by Takuro Furusawa Note: No evidence of cutting big trees is seen because of continuous cultivation.

Note: No evidence of cutting big trees is seen because of continuous cultivation.

In the following description, only lagoons, shallow sea, mangroves and marine protected area are discussed.

(a) Lagoons and Shallow Seas

Lagoons consist of coral reefs ( Sagauru), seagrass beds ( Kulikuliana), sand bank ( Onone), and silt/sand ( Nelaka) and the residents make use of each area to earn a living (Aswani and Lauer 2006). For example, deep water in a coral reef is a place for fishing, and shallow water is for catching smaller fish to be used as bait. Also, nassa mud snails ( Nassarius spp.) are gathered in the sandy ground areas.

Mangroves, locally known as Petupetuana and growing where land and sea meet, provide hunting grounds for shellfish and crabs, which are not only for the residents’ own consumption but also used to exchange for cash. The residents care about the mangrove. For example, an informant reported that a group of villagers once protested and forced a logging company’s operation to halt when an inflow of red soil contributed to a decrease in population of shellfish and crabs. 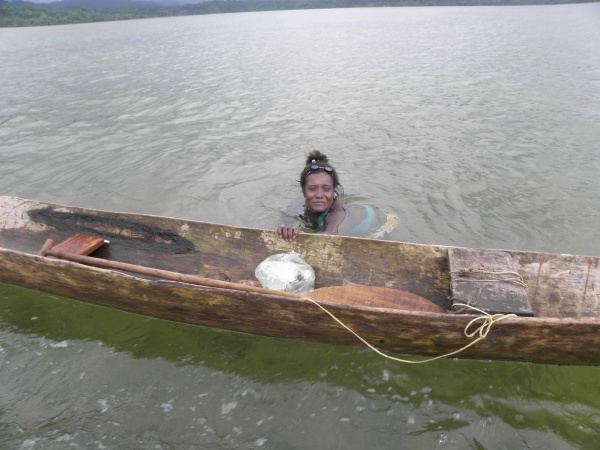 Local non-governmental organizations and overseas researchers planned to set up a Marine Protected Area (MPA) at a coral reef area in a lagoon (Aswani and Lauer 2006). As well as being a place for the residents to catch small fish, the reef is a spawning ground and a habitat for juvenile fish. Therefore, it is a very important area for protecting the fish population. The fishing ban should not seriously affect the residents’ lives, but it should have a significant but positive effect on the fish. In exchange for setting up the MPA, the non-governmental organization built a medical clinic for the residents as a part of development aid. According to a follow-up research, marine ecologists reported that the ecosystem had improved. (Aswani et al 2007)

The residents participate in managing the reserves and MPAs described above. However, they observe traditional rules for conservation as well.

One example of such rules concerns the use of a scarce tree, the white beech ( Gmelina moluccana). When a person knows that a new canoe will need to be made in future, he has to find a young white beech and make a mark on it to inform the other residents of its future use. Then, when it is time for canoe-making, he has to ask for the customary chief’s permission.

There is also a rule for gathering sago palm leaves which are an essential material for roofs and walls of traditional houses. As it takes a very long time for a sago palm to re-grow once the trunk is cut down, the rule says that the trunk should be untouched and only leaves can be cut off. It also says that they should leave four leaves untouched because the tree would die if all the leaves were cut off. 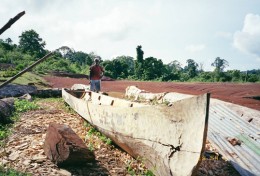 Photo 4: Carving a canoe out of a large white beech trunk. Photo by Takuro Furusawa 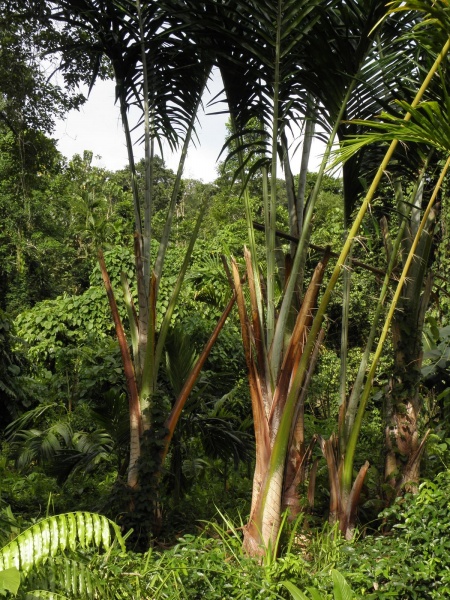 Photo 5: Sago palm after with four leaves left untouched (Photo by Takuro Furusawa) Leaves have been removed from the sago palm, but 4 are left untouched

The landscape of subsistence villages in the Solomon Islands is made up of settlements along the coastlines surrounded by what resembles a mosaic of various human-modified forests on the land. The marine environment is comprised of shallow lagoons and barrier islands farther offshore. Compared to Satoyama in Japan, there are relatively less modifications by humans. Also, agricultural fields are not kept tidied on a permanent basis. After a forest is transformed into a crop field, the field turns back into a forest again in time. Therefore, each forest is unique and made up of many diverse species. As each forest has different flora and fauna, the residents use each for a different purpose.

In recent years, with the influence of the market economy, commercial logging has been carried out widely, and industrial forestation is being performed where such logging has been implemented. At the sea, there is an increase in scale of marine product gathering for cash, which is seriously affecting the marine ecosystem. The continuity of such a trend could destroy the residents’ livelihood, triggering a decrease in the number and variety of species.

Generally, Pacific Islands governments are not very keen on projects aimed at the conservation of nature, partly because the government revenues depend largely on the utilization of natural resources such as lumber and fishing. Furthermore, even if a government tries to take action on conservation, it is difficult to achieve a successful outcome because most of the territories consist of customary lands in which protected areas cannot be set up without the residents’ consent.

The residents in the Solomon Islands, whose livelihoods have been heavily reliant on farming and fishing, have no choice but to continue making a living out of natural resources.

Even for the sake of conserving natural resources in the Solomon Islands, it is virtually impossible to persuade people to leave unmodified forests untouched or to protect all coral reefs. Even if such ideas were accepted, it is unlikely that the agreements would become permanent. Therefore, for the residents’ lives and traditional culture, also for the variety of local species, it is important to stop large-scale changes such as deforestation and industrial reforestation, and also to provide support for the use of reserves and modified forests.

This study was commissioned by the Ministry of the Environment, Japan

Furusawa, T. and R. Ohtsuka. 2009. The role of barrier islands in subsistence of the inhabitants of Roviana Lagoon, Solomon Islands. Human Ecology37(5):629-642.