Indigenous Knowledge, Customary Use of natural Resources and Sustainable Biodiversity Management: Case Study of Hmong and Karen Communities in Thailand

This research project studied the sustainable, customary use of biological resources by highland communities in Northern Thailand. It was undertaken with the objectives of studying the knowledge, customs, and traditions practiced by the Hmong and Karen (Pga K’Nyaw) groups in the management of natural resources and biodiversity, in terms of both the sustainable use and conservation of these resources.

The project also studied how highland communities have adapted to the impacts of externally imposed laws, policies and development processes. The study has the further objective of being used to lobby for the effective implementation of government policies in line with Article 10(c) of the Convention on Biological Diversity (CBD). The study used a Participatory Action Research (PAR) approach. Interviewing, observation, and data analysis were done jointly by community leaders, researchers and the advisory team. 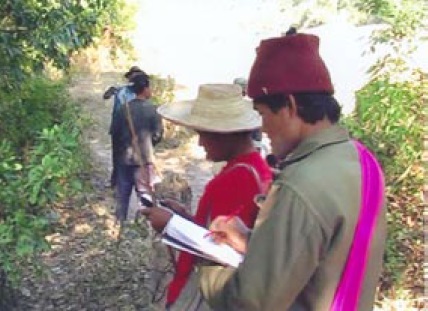 The study found that each community has a traditional leader, who might be not the same person as the official leader. (who is elected by the community) The traditional leaders hold authority based on the history and structure of the community. They play the main role in building a relationship between people in the community and natural resources and biodiversity management, by guiding their customary use of soil, water, forest, animals and plant resources. Indigenous knowledge about customary resource use is expressed as patterns of thought, production, beliefs, customs, traditions and rituals. All of these tangible expressions result in a balance between the maintenance of life and dependence on nature as appropriate for each ethnic group. Villagers use natural resources in every aspect of their life, from food (through farming, hunting and gathering) to housing, clothing, medicine, and performing rituals at auspicious events like births, weddings, and funerals. The process of transmitting this knowledge from one generation to another is incorporated into customs such as teachings, songs, legends, stories, rituals, and practical daily activities, especially those related to their agricultural and forest-dependent work.

There are similarities between the Hmong and Karen in their categorization of, and beliefs about, the ownership of natural resources, in that the ultimate owners are supernatural entities such as the Lord of the Water, the Lord of the Forest, the Lord of the Mountain, or guardian spirits. Both groups believe that these spirits are the caretakers and guardians of natural resources. Indigenous People using these resources ask permission to do so only in order to maintain their livelihoods. After having been granted permission by the spiritual owner, they are required to use the resources carefully and sensibly. These beliefs aid in the sustainable use and conservation of resources. The main differences between the Hmong (Mae Ya Noi and Mae Sa Nga villages) and the Karen (Khun Ya and Mae Pon Nai villages) are seen in their agricultural systems. The Karen emphasizes wet rice and swidden cultivation, mainly producing rice. The Hmong do not grow wet rice or upland rice, but plant cash crops instead. The main factors that play a role in cultural erosion and changes in social and economic activities taking place in the communities relate to the influences of the external development system that emphasizes commercial economic concepts, religion, and formal education.

The work of various government and non-governmental agencies has caused adaptations to occur or has been met with community resistance in the past. For example, Mae Pon Nai village has struggled against the thinking of government and religious organizations, and has not accepted a great deal of outside cultural influence. Khun Ya village has not adopted monoculture cash crops because they believe it destroys their indigenous agricultural methods. Community members have joined together at the community, watershed network, and national people’s network levels in order to find an appropriate solution to their problems.

The lack of title to agricultural and residential lands, one of the main problems affecting the two tribes and causing insecurity in resource management, is a result of Thai laws that have placed certain areas under the direct administration of government agencies, such as the laws concerning National Reserve Forests, National Parks, and Cabinet resolutions. These laws have created obstacles for highland communities to claim their rights. The Thai Constitution, which is the highest law in Thailand, provides for the recognition of customary natural resource management by indigenous peoples but the relevant articles have not yet been put into practice.