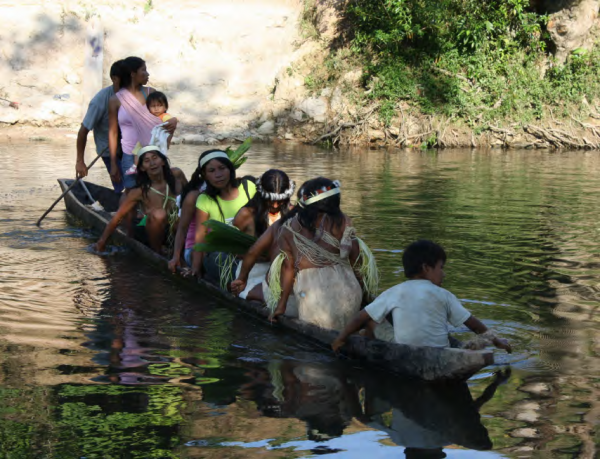 The target landscape for COMDEKS activities in Ecuador is located in the Napo River watershed between the provinces of Napo, Orellana, and Pastaza (Figure E-1). The Napo River is a tributary of the Amazon located on the western slope of the Andes Mountains and flowing through one of the most biodiverse areas of the Amazon Basin.

Ecuador Amazon’s rainforest covers 30 percent of the country’s total land area, making it the country’s largest biogeographical region and one that has been characterized as “mega-diverse.” The Napo runs parallel to the Northern border of the 2.4 million-acre Yasuni National Park, Ecuador’s largest protected tract of rainforest and a UNESCO Biosphere Reserve. The target landscape itself is 4,840 km2, with a population of 44,250. 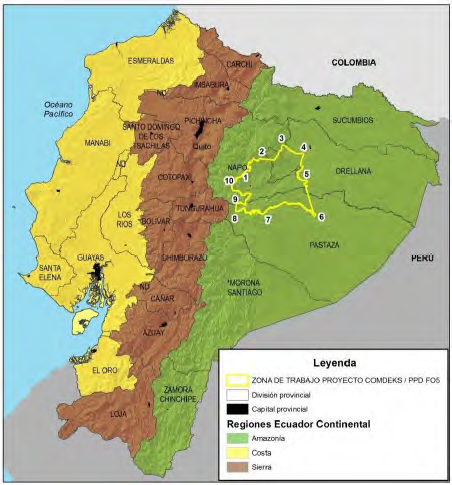 The reason for the ecological uniqueness of the selected landscape comes from the fact that during the last Ice Age, the Napo River Canyon acted as a “Pleistocene refuge” for a wide variety of species whose continued diversification has been unimpeded. The Amazon region plays a critical role in regulating the climate as it retains large amounts of organic carbon and contributes to the regulation of the Amazon basin, one of the most important freshwater systems on the planet. Within the waters of the Amazon Basin there are over 1,000 species of fish (including electric eels and piranhas), as well as more than 400 species of amphibians and reptiles. The most notable mammals living in this environment include freshwater dolphins and manatees.

The target landscape is a zone rich in biodiversity and ecosystem services. Its inhabitants retain many traditional methods for sustainable resource management and ancestral knowledge of biodiversity. However, it is also an area that has lost nearly 20 percent of its natural vegetative cover in the past 50 years. The main trigger for this has been the rise of resource-extractive industries, particularly the oil and mining industries, which were promoted without taking into account their negative impact on the environment. 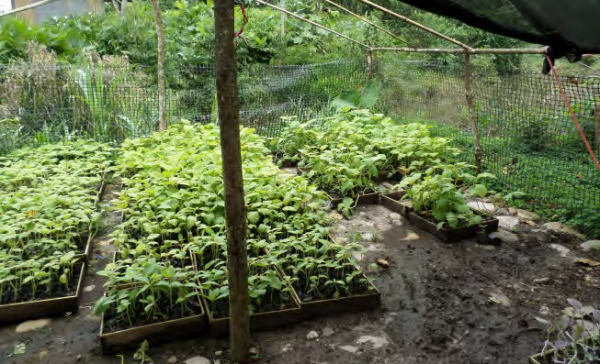 Since the 1970s, when the oil industry first entered the area, the landscape has become fragmented. The construction of oil-related settlements and infrastructure; the clearance of forest areas for palm oil and soybean plantations, and the use of other unsustainable agricultural practices; the extraction of timber and mining of gold; and also the desire of settlers and local people to own land have all contributed to this fragmentation and environmental decline. Destruction of the area’s ecosystems directly affects the rural communities, which base their livelihoods on local natural resources. This ecological disruption also changes the cultural dynamics of transmitting traditional environmental knowledge to new generations.

In spite of these negative trends, one positive factor in the target landscape is that, while the majority of local land is now under private ownership, the land in most indigenous communities still remains under communal tenure—that is, held as common property among community members. This ensures that important conservation areas are not fragmented in indigenous territories, due to the cultural practice of preserving sacred sites and protecting lands for future generations.

The socioeconomic context of the COMDEKS target landscape is characterized by indigenous rural communities—mostly Kichwa communities—with high rates of poverty, social exclusion and discrimination. Most of the population living in the rural sector derives its income from activities related to agriculture, livestock, forestry, fishing and tourism, according to the 2010 Census. The mestizo settler population, which makes up about 20 percent of the population in the target landscape, is also engaged in agriculture and logging, as well as more urban services as are found in parish and county seats.

Many communities are dispersed throughout the landscape. There are 85 communities in the Yaku Samay area, mainly Kichwa, spread throughout the rural parishes of Archidona, Tena and Arosemena Tola cantons. In the Akllak Sacha area there are 26 communities located in the rural parishes of Santa Clara, San Jose and Arajuno. These communities, which are populated mostly by indigenous people, are organized and represented by community associations—grassroots organizations that are legally empowered to represent the community’s political, social, and commercial interests.

An important element of the landscape is that the communities that have evolved amid the rich local ecosystems have developed a culture rooted in the understanding, appreciation, and respect of the land. This has generated forms of ownership and land management that have not only contributed to conserve the forest, but have also created a great deal of knowledge about the potential of its biodiversity, this being the key to the survival of these communities.

One of the unique forms of agricultural production and subsistence economy that have arisen from indigenous knowledge of the landscape is known as the “Kichwa chakra system,” in which a biodiverse mixture of local crops are grown together, including coffee, corn, naranjilla, pineapple, beans, cassava, rice and wild varieties of peanuts. Although today this system has been supplanted to a great extent by less diverse and less sustainable farm practices, it remains a viable, biodiversity-friendly economic strategy and has become one of the focuses of COMDEKS livelihood support in the target landscape. 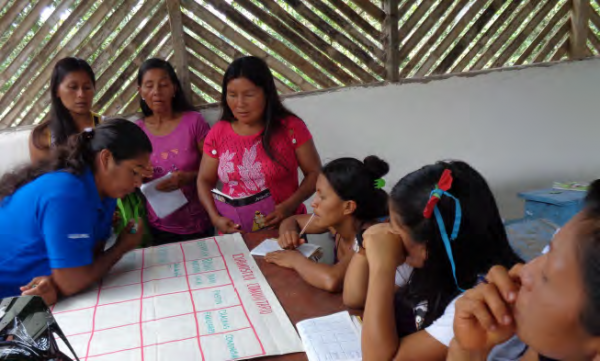 To engage communities in the target landscape and understand the current landscape conditions, a Baseline Assessment was conducted in 2013, led by the Sacha Causai Foundation. The assessment involved meetings with local community leaders, site visits to preselected areas in the target landscape and workshops for the participatory selection and design of projects. A community consultation was conducted based on the COMDEKS questionnaire and Resilience Indicators of socio-ecological production landscapes (SEPLS), gathering information from men and women from local communities. A Kichwa translator facilitated the consultation to ensure full engagement of community members.

In undertaking the Baseline Assessment and Community Consultation, COMDEKS Ecuador built upon a considerable foundation of work accomplished earlier through the SGP grants in support of Ecuador’s “Biocorridors for Good Living” program. This work included mapping, ecological analyses, and community organizing around the Biocorridors program.

Results of the baseline assessment provided the basis for the development of the COMDEKS Landscape Strategy in the Ecuadorian Amazon Region, aiming to guide local communities in the development of community-based projects, as well as conduct project monitoring, thereby enhancing resilience of the target landscape.

The goal of COMDEKS activities in the area is to consolidate, replicate, and scale up the work already under way by indigenous and rural community organizations to protect the biodiversity and culture of the areas surrounding the Napo River. The landscape approach supported by COMDEKS in Ecuador builds upon the concept of “Biocorridors for Good Living” (Buen Vivir or Sumak Kawsay), a concept adapted from the 2008 Constitution of Ecuador and the National Plan for Good Living, and implemented earlier by the Ecuador GEF Small Grants Programme (SGP), with the aim to support local initiatives focused on promoting biodiversity conservation throughout Ecuador’s various ecosystems.

“Biocorridors for Good Living” are described as expanses of land where ecological connectivity is reestablished, connecting fragmented habitats, incorporating sustainable production activities into the landscape, and fostering community partnerships. The GEF SGP Ecuador Country Programme supports four priority ecosystems: paramos (Neotropical high mountain biomes), dry forests, mangroves, and tropical forests). The Amazon Region, where the COMDEKS target area is located, is one of the four priority ecosystems supported by the GEF SGP Ecuador Country Programme. It is an area with particularly relevant ecosystems, which belong to indigenous and rural communities engaged in productive activities and which are under pressure from large-scale resource extraction activities.

The COMDEKS approach is interrelated with the approach and strategies used by the SGP Ecuador Country Programme to build the Kamanwi, Yaku Samay and Akllak Sacha Biocorridors —a participatory process in which many local actors cooperated. Figure E-2 shows the operational-level linkages, ensuring that COMDEKS and SGP act in a common conceptual and operational platform. 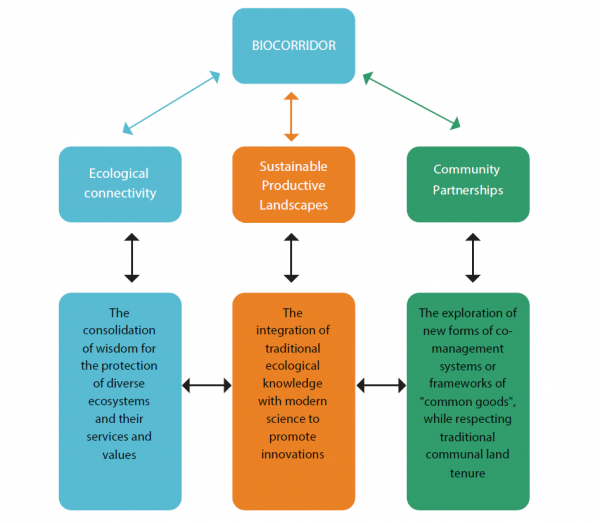 Stakeholders in the COMDEKS target landscape crafted their Landscape Strategy with the intention of building on the achievements and lessons of the SGP Ecuador Country Programme and its work on Biocorridors for Good Living. Table E-1 lists the three Landscape Outcomes around which the Ecuador Landscape Strategy is built, as well as performance indicators that will be used to measure these outcomes.

Greater ecological connectivity and improved biodiversity through reforestation activities and protection of watersheds.

·         Number of chakras with agroecological improvements.

·         Number of quintals of locally produced cocoa in the value chain.

Strengthened institutional capacity and participatory decision making through the promotion of community working groups and conservation agreements at the landscape level.

To guide the selection of local projects aimed at contributing to community and landscape resilience, the Landscape Strategy for the Napo River Watershed suggests a number of activities that together would contribute to the Strategy’s specified Resilience Outcomes.

Outcome 3: Strengthened institutional capacity and participatory decision making through the promotion of community working groups and conservation agreements at the landscape level: 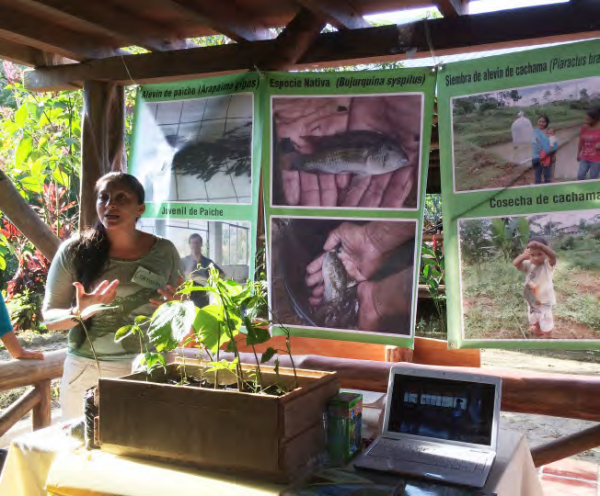 Five proposed projects in the biocorridors Yaku Samay and Akllak Sacha were identified during the consultation process to be funded through COMDEKS. In keeping with the suggested activities above, the five COMDEKS projects support agroecological and agroforestry practices to diversify household production, conserve important forest ecosystems through reforestation activities and protection of micro watersheds, and promote income generation activities such as the development of sustainable tourism and farming of native fish. These COMDEKS projects are expected to generate important lessons about best community practices in order to maintain, rebuild, and revitalize landscapes.

As part of the process of community empowerment, and in order to encourage effective partners to participate in the project work, several federations of local peoples were organized before project work commenced.  These federations included: Kijus Association of Kichwa Communities (known as ACOKI); Cotundo Union of Kichwa communities (UNCOKIC); and the Kichwa organizations of Loreto (OKIL), which includes the associations CONAKINO, FAOICIN, and FOCIN. 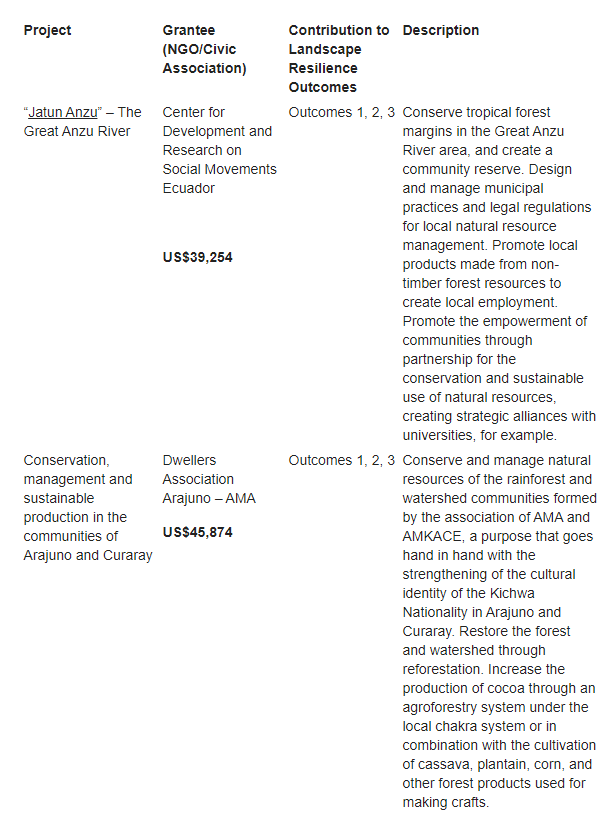 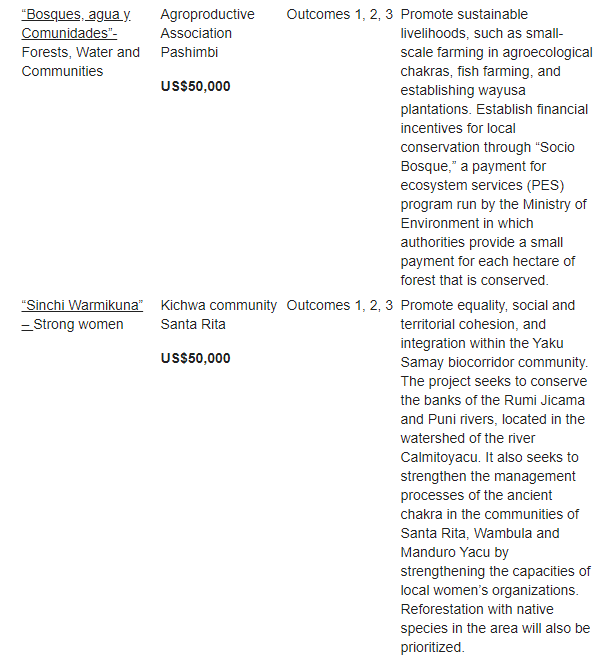 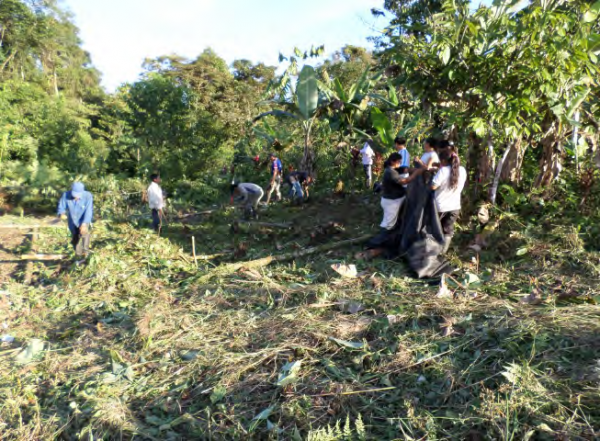 COMDEKS projects in the Napo River watershed empower communities to conserve important ecosystems through community agreements, forest restoration and protection of microwatersheds. Communities contribute to strengthening the sustainability of production systems through agroecological and agroforestry practices in so-called “Kichwa chakra systems,” farming of native fish, and development of products with a local identity such as cocoa and guayusa, which also generate family income. Resilience in socio-ecological production landscapes in the Napo watershed is evident when communities disseminate ancestral knowledge—such as the chakra system—and strengthen their capacities to implement sustainable activities through local associations and federations that link producers across the landscape.

As a foundation for these achievements, COMDEKS Ecuador benefited from its close association with the SGP-supported Biocorridors for Good Living program, which was based on a landscape approach and was entirely consistent with COMDEKS principles and landscape planning practices. Much community organizing for the Biocorridors had already been accomplished at the outset of COMDEKS, and the ideas of landscape connectivity, sustainable production landscapes, and community partnerships—the three elements that define the Biocorridors for Good Living approach and also underpin the COMDEKS landscape approach—had already been introduced to many communities in the target landscape. In addition, local and national government actors were supportive of the Biocorridors and of the COMDEKS approach.

One of the practical effects of the area’s history with the Biocorridors program is that stakeholders were accustomed to meeting together in multistakeholder and multicommunity groups for the purpose of landscape-level governance and project planning. In fact, a Biocorridor Working Group had already been established for the two biocorridors in the target landscape, and the participants in COMDEKS projects attended these meetings as well. The net effect of these factors is that the maturation of a landscape community in the Napo River watershed is already well underway, although sustaining this community once COMDEKS projects are complete will require continued effort from all parties. 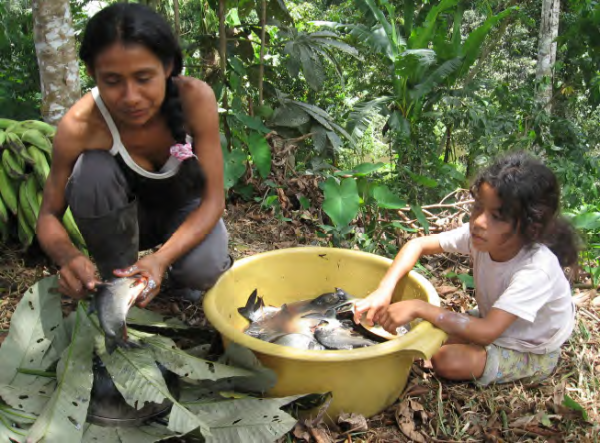