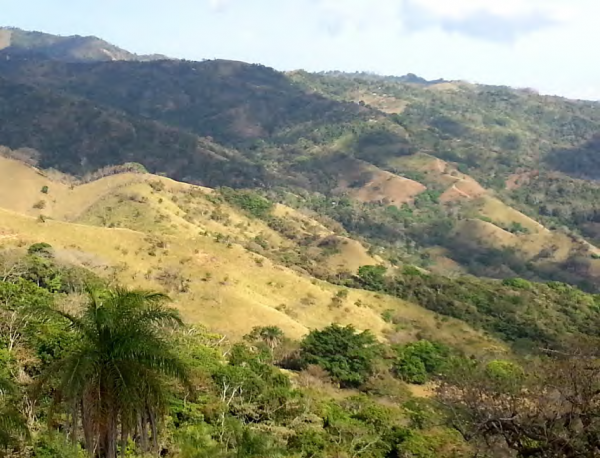 The target landscape selected as the focus of COMDEKS activities in Costa Rica is the Jesús María River Basin, located in the country’s Pacific region. Spanning 35,280 ha, the region is a diverse landscape comprised of forests, coffee and fruit trees, mangroves, pastures, plantations, water bodies, and urban areas.

The Jesús María River Basin consists of several sub-basins, including the Paires, Jesús María, Surubres, Machuca, and the Cuarros Rivers, whose headwaters are located between 1,000 and 1,440 m above sea level in the Constancia, Pelón, Berlin and Aguacate hills. Except for the Cuarros, these rivers converge in the flat lands of the Labrador in the lower part of the watershed between 80 and 120 m above sea level. The entire basin drains into the Pacific Ocean in the Tivives wetland (a Wildlife Protected Area, WPA), with its mangrove and estuarine system. Tivives is a wetland of great importance because it retains a variety of mangrove species, including the Red Mangrove (Rhizophora mangle); helps trap sediment transported by the rivers from the highlands; and regulates the entry of seawater. Moreover, it is a critical breeding ground for marine life, and is the basis for the livelihoods of artisanal fishers in the Gulf of Nicoya.

Upper Basin: The primary production activities in this landscape are coffee production and small-scale livestock breeding on the area’s pasturelands. The secondary activities are cultivation of corn, vegetables and ornamental plants. Approximately 3,000 ha of forest shade coffee are grown in this area, with some farms on fertile volcanic soils and others on degraded soils more prone to landslides. Land ownership in the area is characterized by small coffee farms of 2-5 ha in the hands of about 500 families. However, there are also some larger livestock farms for chickens, pigs and dairy cattle. This basin is the closest to the Central Valley and the nation’s capital city of San Jose.

Middle basin: This zone is characterized by extensive jaragua pastures (used for cattle rearing on large farms), palms and trees in pastures, forest fragments in the central area (Cerro Surubres), river gallery forests, and about 4,000 ha of sugar cane and fruits such as mango, avocado, sapote and, to a lesser extent, citrus, acerola (malpighia), cashews and tamarind in the transept between Desamparados of San Mateo and Nances of Esparza. Large chicken and pig farms of 50-200 ha each, typically owned by farmers who do not live in the region, also appear in the Paires sub-basin.

Lower Basin: Prevalent in this area are plantations of cucurbits (melon and watermelon), sugar cane, rice, papaya, pepper and tomato, as well as improved pasture for dairy and beef cattle, forest plantations and fruit trees. Various industrial plants are also found along the road corridor between Ceiba and Salinas (Route 27). The city of San Mateo and part of the city of Orotina are located in this lower basin, including various real estate developments for vacation homes of urban residents on lands that were part of a previous agrarian reform. There are also large livestock farms and agro-industrial production sites owned by large estates, which coexist with old plots dating from the agrarian reform process.

Approximately 30 percent of the target landscape is covered by forests, which are mostly composed of secondary forest, teak plantations, and coffee and fruit trees. Apart from approximately 150 ha of mangrove forest at the mouth of the Jesús María River, no natural or primary forests remain throughout the watershed. Another 40 percent of the land comprises pastures and thickets, and the remaining 30 percent is urban areas and melon plantations. 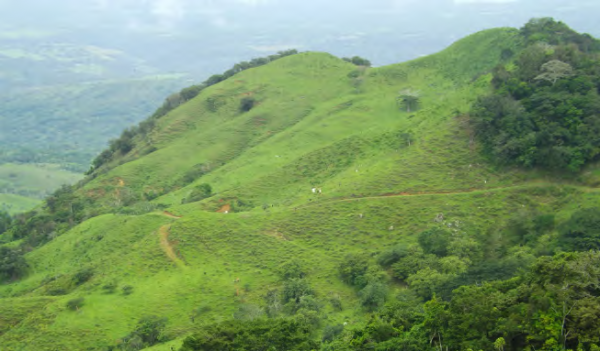 The upper basin of the target landscape consists mostly of small coffee plantations, where communities jointly organize their coffee production. This creates a diverse ecosystem of coffee trees, citrus, and trees planted for lumber, as well as pasturing of pigs and chickens. In the middle basin, fruits grown include mango, avocado, and sapote. This portion of the landscape is also home to various birds and small mammals, which coexist within the context of the commercial fruit production. The lower region stands out for the unique estuary and mangrove ecosystem, the majority of which has been razed in recent years. Due to deforestation, the area is facing increasing degradation, as well as pressure from reductions in freshwater availability.

Throughout the basin, the loss of natural forest cover has left the landscape highly fragmented. Consequently, biodiversity loss has been substantial. Only small relicts of primary forest remain in the galleries of the main rivers and mangroves. The remaining forest cover comprises heavily managed and fragmented secondary forests, located in the upper reaches of the hills, with poor connectivity between these secondary forest fragments. Shade coffee, fruit trees and planted teak forests are also important elements of the remaining forest cover.

The target landscape area occupies 14 separate diffusely populated districts within San Ramon, San Mateo, Esparza, Heredia, and Garabito counties. The region is characterized by high levels of interagency cooperation and coordination through a wide array of social groups, community farms and coops, and even various local sports teams, which collectively create a strong sense of community and empowerment on a local level. Furthermore, human development levels are considered moderate to high, so extreme poverty and food insecurity are not problems in the region. The main economic activity in the area is agriculture, with most production focused on coffee, rice, sugar cane, and fruit. In spite of its current productivity, there is concern that the environmental threats to the Jesús María River Basin will have adverse socioeconomic consequences.

Parts of the surrounding landscape, such as the city of Orotina Esparza, are undergoing a rapid cultural transition with urbanization. The majority of employment is in the service sector of Greater Puntarenas, the nearest sizeable city. The cultural background is diverse and can be classified as a “mestizo” culture, the product of a mix of Indigenous, African and Sephardic Hispanic ancestors stemming from the colonial era.

One of the main aims of the baseline assessment is to develop a country landscape strategy. In December 2013, a baseline assessment was conducted by the Association for the Organic Agriculture Movement of the Central Pacific (Asociación para el Movimiento de Agricultura Orgánica del Pacifico Central) in order to evaluate the state of the landscape and to identify key environmental and socioeconomic issues. The assessment was carried out through a series of consultations with local community leaders, as well as field visits across the region. Three workshops were held with local community members from throughout the watershed, during which a total of 105 local community leaders (31 women, 74 men) were invited to rate the state of the region using the Socio-ecological Productive Landscapes and Seascapes (SEPLS) Resilience Indicators to gain input from the community.

The results from the consultation process and the draft Landscape Strategy were then presented in a final workshop with 40 stakeholders from the watershed area. The baseline assessment identified the need to improve the dissemination of scientific knowledge at the decision-making level and at the community level in order to improve the resilience and recuperation of the degraded resources. It also identified the need to take measures that could ensure the sustainability of the production activities at the local and regional levels, and to promote the use of new technologies and practices such as water harvesting, stone walls to prevent erosion, and the use of biodigesters. 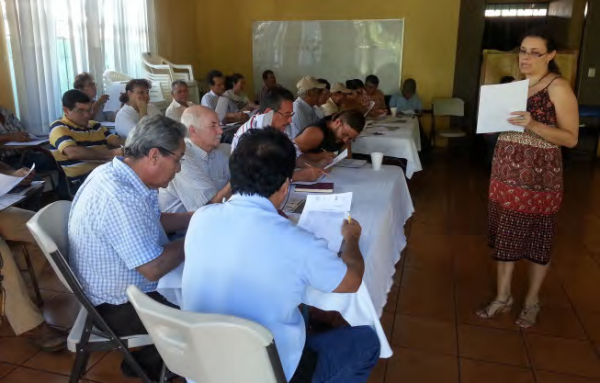 The long-term objective of the Landscape Strategy is the development of sustainable socioeconomic production activities within the Jesús María River Basin through information sharing, capacity building, and restoration of the natural landscape. Table A-1 lists the four Landscape Outcomes around which the strategy is built, as well as performance indicators that will be used to measure these outcomes.

Table A-1. Landscape Outcomes and Indicators from the Costa Rica Landscape Strategy 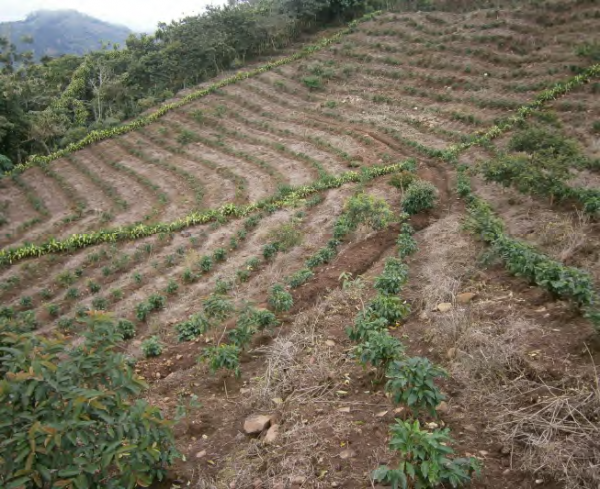 To guide the selection of local projects, the COMDEKS Landscape Strategy for the Jesús María River Basin suggests a number of activities that would help achieve the specified Resilience Outcomes:

Outcome 1: Land degradation in the target landscape is comprehensively addressed through interventions that prevent soil erosion and sediment transport to water bodies:

Outcome 2: Forest cover throughout the river basin is increased through mechanisms such as payment for environmental services and strengthening of local protected areas:

Outcome 3: Sustainable agricultural production practices are established in the socio-ecological production landscape, including local coffee production in the upper basin, fruit growing in the middle basin, and integrated pastoral and agro-silvopastoral in the middle and lower basin:

Outcome 4: Scientific knowledge, traditional knowledge and technological innovation is strengthened and shared among producers, farm owners and the general public:

Outcome 5: Governance and landscape management capacity of local and regional organizations is strengthened in the target landscape: 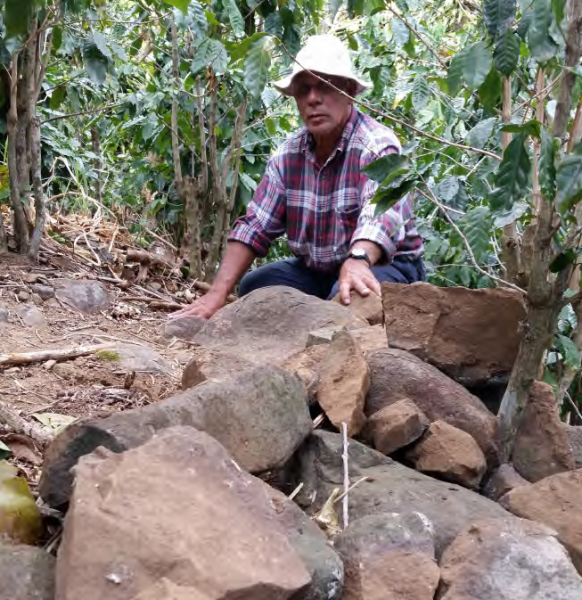 Based on this guidance, five local projects were selected as part of COMDEKS Costa Rica’s portfolio of landscape interventions in the Jesús María River Basin (see Table A-2). Each is led by a different community-based organization, with grants ranging from US$30,000 to US$50,000.

Documenting, organizing, and making available information on sustainable production practices: Several knowledge products have been assembled so far for use in different applications. One is a toolkit for Agricultural Extension Agents that documents 44 sustainable production practices implemented in COMDEKS projects in the river basin. In addition, an alliance between COMDEKS project leaders and three government departments produced a planning tool that famers can use to track their farm production, and which also disseminates soil conservation practices. Another alliance with the academic institution CATIE produced a series of documents that documented traditional and scientific knowledge about best practices implemented in the target landscape. 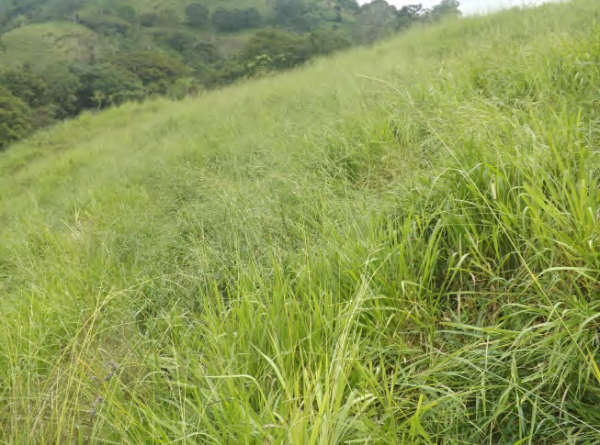 Experience from COMDEKS projects, combined with experience from previous projects funded by SGP Costa Rica using the same community-based ecosystem management philosophy, have produced a resident population with significant social capital and technical experience with landscape projects and measures of landscape resilience. Field visits and exchanges of findings and results among COMDEKS communities have augmented this fledgling landscape community.  In addition, many partnerships with government departments such as the Ministry of Agriculture and the Ministry of Environment, the National Learning Institute, and others, have offered a base of support services and training to communities in the area.  This offers a good basis going forward for landscape governance and continued community-led projects to restore resilience and support sustainable livelihoods. Efforts are also on-going to create a basin-wide land and resource governance platform that will legally empower communities to bring their landscape experience into the decision-making realm. This would take the form of a Jesús María River Basin management committee, including both civil society and government representatives. 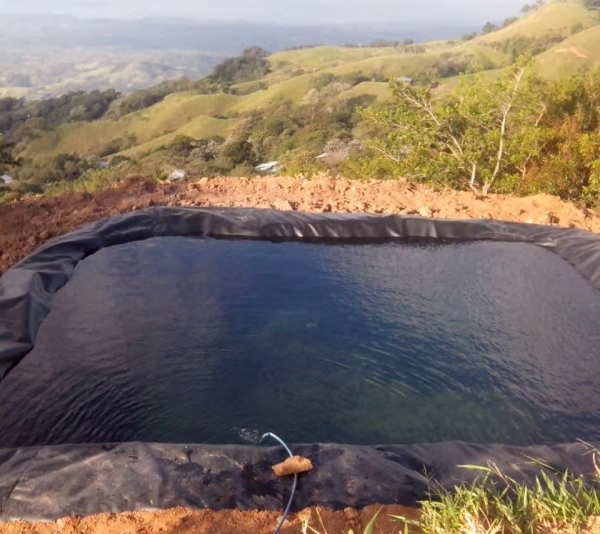 A reservoir in the mid-river basin provides water for irrigation, animals, and other uses, COMDEKS Costa Rica

The upper basin is the most homogeneous area in the target landscape in terms of culture and produce. Producers all come from the same cultural background (called Cartagos, or whites from the West Central Valley), and have been farming a single crop—coffee—for over a century. This relative homogeneity has allowed them to work together in an integrated and cooperative manner and to be open to adopting new technologies and other innovative solutions that could increase their crop production. It has also made them interested in acquiring new knowledge on the cultivation of other crops and their associated ecology.