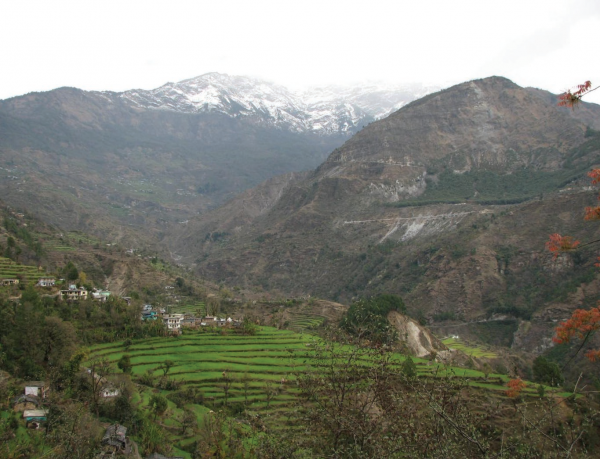 The COMDEKS target landscape in India includes an area of approximately 50,000 ha spread over six locations in Uttarakhand in the country’s north-central region. Of these six landscapes, Rasulpur  is located in the foothills of the Himalayas, while Ranman, Almora and Kausani, Pipalkoti, Tadikhet, and Ranikhet lie within the Himalayan mountain region. Rasulpur lies near Rajaji National Park, near Haridwar, and hosts a large number of forest dwellers who were driven from the park without compensation and have turned to environmentally harmful practices.

The Uttarakhand State comprises 13 districts distributed over two administrative divisions, Garhwal and Kumaon, and shares international borders with Tibet in the north and Nepal in the east. Uttarakhand is spread over 5.4 million ha, of which 4.6 million ha is classified as hill region, and 750,000 ha as plains. Of this area, 3.5 million ha have forest cover.

The Himalaya mountain system plays an important role in the climate of the region. Areas towards the north that fall within the rain shadow region have very little precipitation. Interior regions also have little rain, but are nonetheless prone to landslides and flash floods during the winter monsoon season. Temperatures vary by altitude, but summers are usually extremely hot and winters cool. The higher areas of the Himalayas experience precipitation as snowfall from December to February.

Uttarakhand presents a very pristine and picturesque landscape due to its wide variation in altitude from about 350 m in the southern plains to about 7,800 m on the northern mountain peaks bordering Tibet and the western passes bordering Nepal. This variation in altitude influences the biological diversity of the landscape, which is characterized by mosaics of rich biodiversity hotspots, wildlife sanctuaries and national parks, interspersed with rivers, deep valleys, glaciers, flower valleys and high peaks.

The role of nature and human dependence on it are very pronounced in Uttarakhand. Nearly 70 percent of the population resides in rural areas, and communities within the Himalayan Mountains earn their living through traditional forestry, agriculture and animal husbandry practices. However, most of the area is forested, and much of it is steeply sloped; only 12 percent of the area is suitable for cultivation. Further, fragmentation of land holdings, migration, and weak support from the state are testing traditional land use systems and threatening once-sustainable practices.

The soil cover in the hills is very thin, and erosion has become a problem, with flash floods during the rainy season followed by drought and drinking water shortages during dry summer months. Rapid surface runoff has washed away the rich top soils in places, rendering large stretches of land infertile, unproductive and unprofitable for cultivation. Gully formation and land slide erosion are not only damaging productive land, but also destroying homes and disrupting the communication and transport systems.

Some 10 million people inhabit the state of Uttarakhand. Agriculture is the most prevalent livelihood, although its ability to support families has been declining as agricultural production has fallen and migration has diverted much of the male population to cities seeking factory work. Generally, agricultural practices depend on whether farmers use irrigation or depend on natural rainfall. Cereals are emphasized in irrigated agriculture, and mono-cropping is prevalent, with two crops harvested per year. However, in the rain-fed system, mixed cropping is practiced, with millets, maize, pulses, and tuber crops grown along with cereals and oilseeds. Mixed cropping, practiced commonly in the hill region, helps in maintaining crop diversity and reduces the risk of environmental uncertainty.

One important factor constraining agriculture as a livelihood is the small size of land holdings. Surveys show that 71.4 percent of families own less than 1 ha of land; 17.7 percent have 1-2 ha, and 10.8 percent have 2-10 ha. Only 0.1 percent have land holdings larger than 10 ha. In many cases, this is spread over a large area, making dairying and farming difficult to pursue. This in turn forces men to migrate from the villages for wage labor, and thus remittances sent from afar have become a major source of village income. 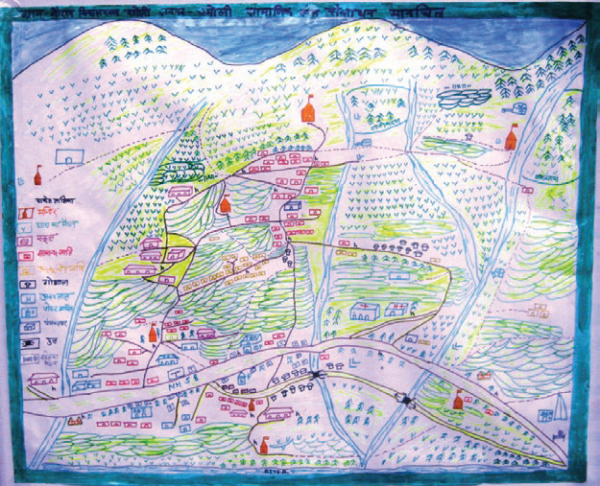 One of the unfortunate consequences of the migration of men away from area villages is that managing the landscape has become an increasingly female task. Land management adds an additional dimension to the many challenges that women face. Women are responsible for securing fodder for cattle, fuel wood for cooking, and water, which are all found far from the village. The involvement of women in the agricultural workforce is an essential aspect of food security in present day Uttarakhand.

In addition to agriculture and remittances, tourism is also important to the local economy of the mountain region, with major Hindu temples and holy sites attracting both pilgrims and tourists to the area.

As might be expected, mountain livelihoods that once existed within a well-balanced landscape have come under pressure with the passage of time and increasing population density. The changing demographic and economic conditions have not only disrupted livelihoods but have also increased pressure on natural resources, further impacting family life and driving out-migration. Lack of local infrastructure and weak understanding by policy makers of the hardships of mountain life has further aggravated the situation. While reasons for this degradation over time can be attributed to many factors, the following constitute the major reasons for this changed scenario over the years:

“COMDEKS is empowering poor communities cut off from the mainstream by rivers for 3-4 months of the year. It is creating impacts on their livelihoods through a range of actions, such as improving cultivation to inhance income and introducing energy efficient technologies to resuce the use of fuel wood and reduce pressure on forests.”

Community consultation to assess baseline conditions in the landscape and identify potential opportunities for community action took place through field visits conducted at eight different locations (at least 50-70 km apart from each other) within the state, involving a total of 150 people. At these visits, community members were asked to participate in the identification of increased pressures on natural resources and mountain communities. An important part of the community consultation was a mapping exercise in each of the participating villages to list and locate the critical local natural resources and identify who had access to these resources. Feedback gathered at these consultations was later followed up with a one-day workshop, during which 112 community representatives scored and discussed the resilience indicators developed by Bioversity International and the United Nations University. The main areas of concern emerging from the baseline assessment included the loss of productive land due to forest fires, soil erosion, and threats from wild animals; soil and water degradation from industrialization; and a shortage of labor from migration. Poor market linkages and lack of awareness of best management practices have also contributed to the loss of biodiversity and the economic hardships that residents are facing, according to the assessment.

Community input from the village consultations and workshops informed the design of the COMDEKS Country Programme Landscape Strategy for India. Table I-1 shows the four Landscape Outcomes around which the strategy is built, as well as the performance indicators that will be used to measure these outcomes.

Table I-1: Landscape Outcomes and Indicators from the India Landscape Strategy

To achieve these outcomes, communities will be guided by the following principles in their choice of local activities: 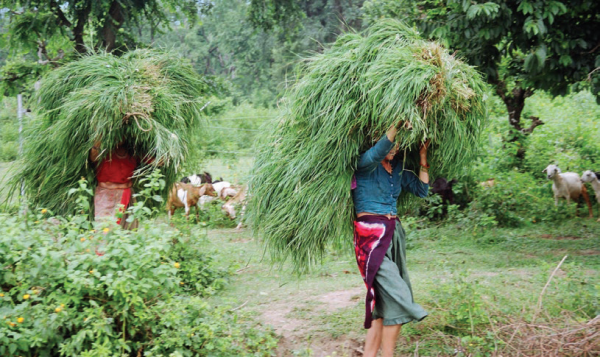 To date, the COMDEKS India Country Strategy has a portfolio of six local projects, supported by small grants of US$32,000 to $36,000 to six local CBOs and NGOs (see Table I-2): 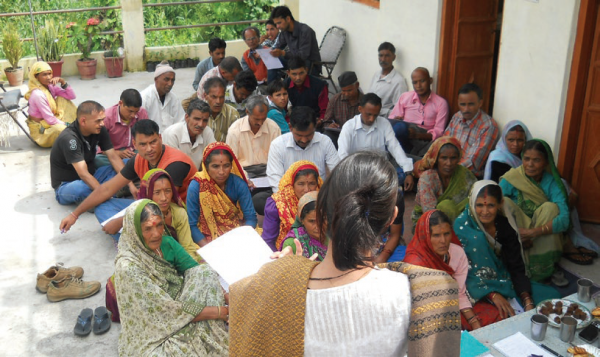 A stress on sustainable enterprise development, creation of alternative income streams for those living near parks, and adding value to current agricultural efforts while making them more environmentally sound marks the overall approach among the project portfolio in Uttarakhand, where expansion of livelihood options and the empowerment of marginalized communities are seen as critical themes. To accomplish this, projects are being institutionalized through a large number of local resource user and self-help groups, with a particular emphasis on women’s self-help groups such as saving and credit groups. In this beginning phase, the emphasis is on firmly establishing individual groups, with coordination among groups not yet the most important consideration. Nonetheless, regular meetings among the NGOs leading the projects and increased contacts between communities for the purposes of skills training and knowledge sharing is now beginning to create a network of actors conscious of complementary activities throughout the target landscape. All the projects are also being networked with the National Watershed Programme, which will link them with technical and political support at a larger level. Still, the development of a functioning “landscape community” is in its infancy. Communities and project activities are physically quite isolated—separated from each other by a distance of 25-45 km in mountainous terrain—posing a challenge to the development of a larger landscape-wide identity. While community members have embraced the integrated approach of the COMDEKS activities, it will require more time for the socio-economic benefits of the approach to become clear and the connections between these enterprises and new agricultural patterns to emerge in a dynamic way.