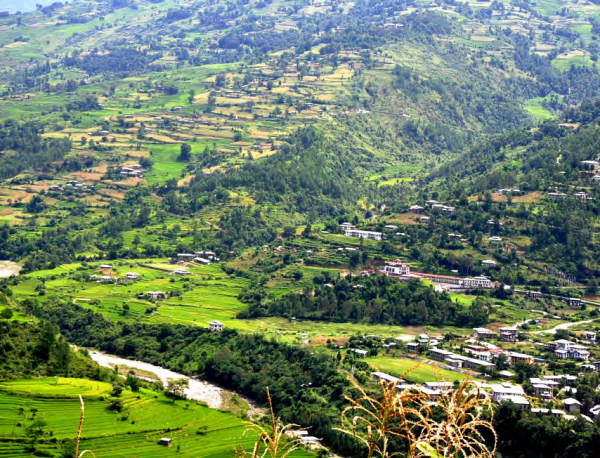 Bhutan is a small landlocked country in the eastern Himalayas, bordered by the Tibetan Autonomous Region of China in the north and the Indian states of Sikkim, West Bengal and Assam, and Arunachal Pradesh to its southwest, south, and east respectively. The country is mountainous, with a rugged and steep terrain. Altitudes plunge from over 7,500 m at the highest point to less than 200 m within a distance of 170 km in the north-south direction.

The target landscape selected for COMDEKS activities is the Gamri watershed, located in the eastern region of the country, with an area of 745 km2. The watershed spreads over eight administrative blocks known as gewogs in Trashigang Dzongkhag District:  Sakteng, Merak, Phongmey, Shongphu, Bidung, Bartsham, Radhi and Samkhar Gewogs. The Gamri River is formed by 19 tributaries originating in these eight gewogs. The Gamri is one of the main tributaries of the Drangme Chhu River, which drains into the Brahmaputra River in India and finally flows into the Bay of Bengal. 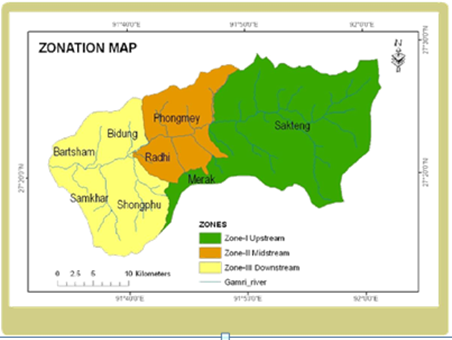 The Gamri watershed is divided into three distinct zones, based on elevation, terrain, land cover, and predominant agricultural activities (see Figure B-1 and Table B-1). Zone I (upstream) is comprised mostly of highland pasture and mixed conifer forest, with altitudes ranging from 2,500 to 4,000 m, and an average slope gradient of 20-30 degrees. Zone II (midstream) and Zone III (downstream) contain pastures and agricultural fields, with altitudes ranging from 700 to 2,500 m, and a slope gradient of 21-40 degrees.

The Gamri landscape is a significant watershed in eastern Bhutan containing more than 66 scattered settlements. The watershed was selected as the pilot landscape for COMDEKS activities mainly due to the significant biological diversity it contains and in recognition of the growing pressures on the landscape from grazing, over-extraction of fodder and fuel wood, landslides and the drying up of water sources.

The watershed covers a diverse climate and contains an array of ecosystems ranging from alpine meadows to broadleaf forests. Land cover consists of 69.3 percent forest, 15 percent natural pasture, and 13.9 percent agricultural land. The remaining 1.6 percent of the surface area is comprised of water bodies, rocky outcrops, settlements and eroded areas. Agriculture, livestock (including yak) rearing, and weaving are the economic mainstays of the people of the watershed.

One significant source of biodiversity within the watershed is the Sakteng Wildlife Sanctuary (SWS), which covers almost three-fourths of Merak and Sakteng Gewogs. The SWS is representative of a diverse eastern Himalayan ecosystem, consisting of alpine meadows, temperate forest and warm broadleaf forest. Of the 46 species of rhododendrons found in Bhutan, 35 species grow wild in the sanctuary, which is popularly known as the “Paradise of Rhododendrons.” Overall, the sanctuary harbours at least 203 plant species, including herbs, shrubs, and trees, and is home to globally threatened and endangered animal species like the Red Panda, Himalayan Serow, Wild Dog, Goral, Common Leopard, Capped Langur, Himalayan Black Bear, Musk Deer and Jungle Cat, to name a few.

About 70 percent of Bhutan’s total area is covered by forest and more than 50 percent is safeguarded as protected areas and biological corridors. Agriculture and livestock rearing are the main economic activities, with an estimated 69 percent of the population engaged in farming. With regard to the Gamri Watershed, Zone I has the highest livestock population in the target landscape, and cattle herding is the main income-generating activity.  Zone II is known for its grain and staple crop production, including rice, maize, and potatoes. Both agriculture and livestock husbandry predominate in Zone III. 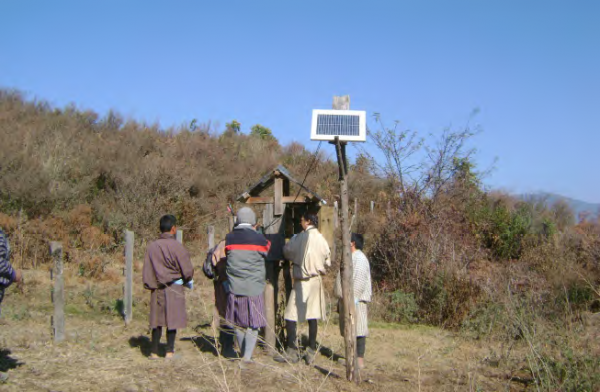 Zone I – Upstream: This zone includes the gewogs Merak and Sakteng, which are inhabited by about 4,200 people. The communities primarily comprise nomadic yak herders, locally known as Brokpas. Cattle/yak rearing is the main socioeconomic activity in this zone, contributing over 83 percent of household income. Zone I is highly significant as it is located in the upstream portion of the watershed and has the highest number of sub-watersheds. At the same time, it has the highest livestock population, which has resulted in severe land degradation due to overgrazing and deforestation from fuel wood extraction (for cooking and heating) and lopping of tress for fodder. Landslides, ravines and gullies are common in this zone, causing the loss of large areas of forests, meadows and grazing areas every year, and triggering serious consequences downstream.

Zone II – Midstream:  This zone includes the gewogs Radhi and Phongmey, with a total population of 9,865 people. Farming and livestock husbandry are the major economic activities in this zone. Radhi is often referred to as the “rice bowl of eastern Bhutan” because of its fertile rice fields and grain production. Other main crops cultivated include paddy, maize, soybean, potatoes and vegetables. Additionally, Radhi is famous for silk textiles (buray gho and kira). Major challenges faced by Zone II include loss of agricultural land from flash floods (mainly triggered by overgrazing and deforestation in Zone I) and landslides during the monsoon season. Farm roads are built with poor drainage systems, thereby exacerbating these problems and causing loss of valuable crop land every year. In addition, human-wildlife conflict is a major problem in this zone, causing loss of traditional crop diversity. The crops are destroyed by wildlife such as porcupines, monkeys and wild boars, causing significant economic losses every year. In some cases, farmers leave their lands fallow due to their inability to cope with these depredations.

Zone III – Downstream: This zone covers the four gewogs Bidung, Samkhar, Shongphu and Bartsham, with a total zone population of about 18,290. As in Zone II, agriculture and livestock husbandry are the predominant economic activities. Rangjung, the economic hub of the watershed, is located in this zone. The key challenges here are somewhat similar to those in Zone II, in terms of landslides, flash floods and human-wildlife conflict. However, Zone III faces additional problems including water scarcity, both for drinking and irrigation, and frequent forest fires during the winter season, destroying large areas of chir pine forests.  Due to the acute shortage of local water resources, large tracts of agricultural land are left fallow.  In addition, the water scarcity has caused conflicts between the people of Bidung and Bartsham, both of whom claim water rights to the Jhomori River.

There is serious concern that the environmental threats to the Gamri watershed are having adverse socioeconomic consequences on the region. Landslides cause considerable loss of natural pasture, rangeland, and agricultural fields, and the combination of flash floods and poor drainage systems have resulted in the loss of limited and valuable paddy and maize fields. This pressure on already limited resources has led to conflicts over forest and pasture resources. Finally, there is a challenge in the lack of diversified income-generating activities, as well as the increasing loss of culture and traditions of the Brokpas, the nomadic yak herders of the region. 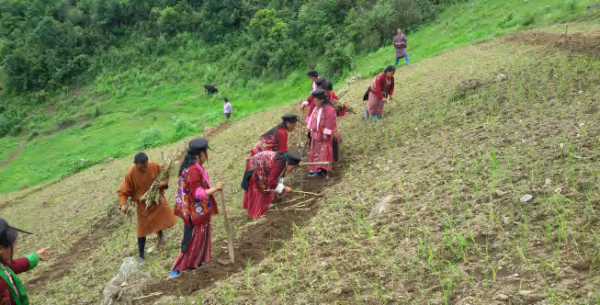 As indicated in the previous section, the major environmental, economic and social challenges in the three zones of the target landscape include:

To understand the current state of the landscape and to identify interventions to develop sound biodiversity management and sustainable livelihood activities, a landscape-wide Baseline Assessment using the COMDEKS resilience indicator set was conducted in August and September 2013.  The assessment was organized and directed by the Centre for Climate Change and Spatial Information, a research unit of Sherubtse College in Kanglung.

Background information for the baseline assessment was provided by the Gamri Watershed Management Plan of 2009—a plan developed by the provincial government to address the environmental issues of the watershed.  Although the plan was not implemented due to lack of resources, its data and analysis proved invaluable in understanding the characteristics and environmental problems of the Gamri target landscape, including major interventions required to address these problems.

The Baseline Assessment itself was carried out through a series of consultations with different stakeholders, as well as field visits throughout the entire landscape. During the meetings, resilience indicator scoring exercises, focus group discussions with key informants, and participatory resource appraisals were used to determine the state of the landscape and the issues faced by the community.

Field visits were conducted in Phongmey, Radhi, Bidung, Shongphu, Merak and Sakteng and consultations were held at the respective gewog centers, with participants including local leaders (Gups, Mangmis, Tshogpas), community members, and staff members of the agriculture, forestry, and livestock extension services of the provincial government.  More than 285 individuals were consulted throughout the course of the Baseline Assessment to help prepare the landscape strategy document in a participatory manner. 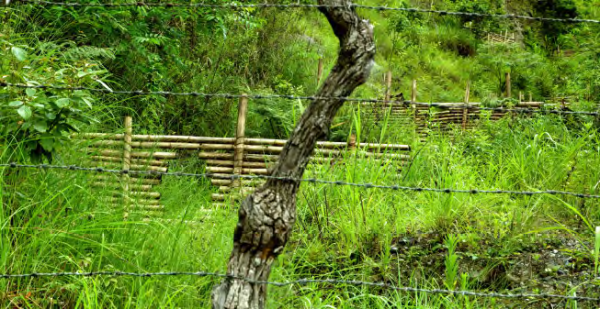 The overall objective of the Landscape Strategy for Bhutan is to:

Table B-2 lists the four Landscape Outcomes around which the strategy is built to achieve its overall objective, as well as the performance indicators that will be used to measure these outcomes.

Table B-2. Landscape Outcomes and Indicators from the Bhutan Landscape Strategy 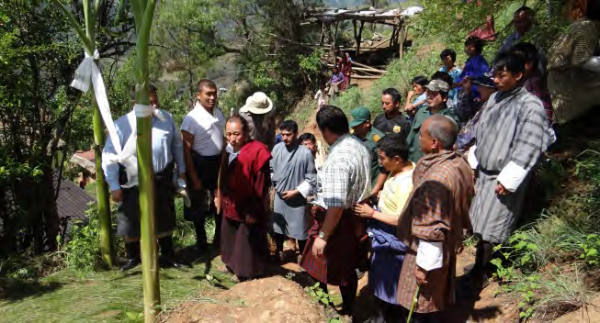 To guide the selection of local projects, the Landscape Strategy for the Gamri Watershed suggests a number of potential community-based activities to accomplish each Resilience Outcome:

Outcome 1: Degraded landscapes and ecosystems of the watershed are restored and sustainably managed for continued provision of ecosystem services:

Outcome 2: Pressure on ecosystems, landscape and natural resources is reduced for enhanced sustainability and resilience:

Outcome 4: Knowledge management and capacity of community and landscape-level institutions are strengthened to enhance landscape and community resilience:

Based on this guidance, eight local projects were selected as COMDEKS Bhutan’s portfolio of landscape interventions in the Gamri watershed (see Table B-3). Each is led by a different community-based organization and financed by a grant of approximately US$31,000 to US$48,000. Each project has been assigned an approximate timeline for implementation, and results are measured and reported on a regular basis by project representatives.

Table B-3. COMDEKS Community-Led Projects in the Gamri Watershed, Bhutan

While it is early in the life of the Gamri Watershed Landscape Strategy, there is evidence that a strong working relationship among the CBOs leading local projects and the representatives of local government and District technical staff is developing. The government agencies have been very supportive of the COMDEKS Programme and its goals and Landscape Strategy, and have provided full administrative and technical support to the different community-led projects. The strength of this support will undoubtedly aid in fostering the gradual formation of a landscape community in which local communities and government share a similar commitment to sustainable landscape governance.  As a first step in this direction, a total of four landscape-wide meetings attended by all project leaders and local and District government representatives have been held so far to share experiences and lessons learned.