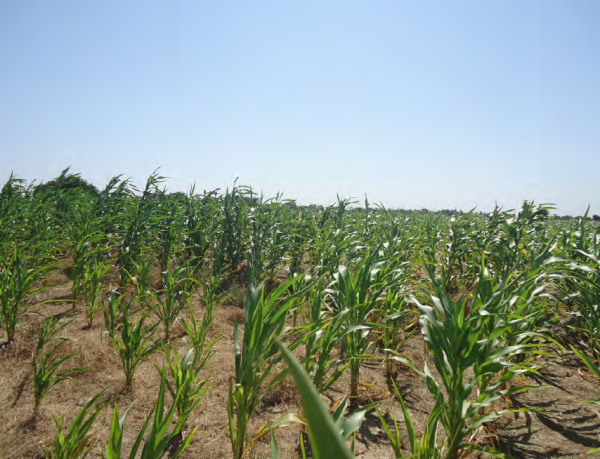 The target landscape for COMDEKS activities in Cameroon is the Bogo region, a district of 93,000 ha with a population of 95,230. Located at the northernmost tip of the country, the landscape encompasses the Sahelian zone of the Lake Chad Basin and the western foothills of the Mandara Mountains.  The Mayo Tsanaga river crosses the length of the Bogo landscape, which consists of a large plain dotted with hills in the southwest and northwest districts.

The landscape of Bogo is characterized by a Sahelian climate with low rainfall (500-700 mm), high temperatures (28-35°C) and low humidity.  The Bogo region is endowed with diverse natural resources and agricultural systems due to its rich alluvial soils (despite the Sahelian climate) and a cultural system conducive to tourism, which provides a solid foundation for economic activities and sustainable development.

Biological Resources and Land use

Bogo is a mosaic of picturesque landscapes, combining rolling hills, natural reforested areas, meadows, wetlands, ponds, small agroforestry plantations of mango and guava trees, as well as rural farmlands, pastures for livestock, nomadic pastoralism, and urban areas. The ability of the region’s alluvial soils to retain water during the dry seasons explains the abundance and diversity of plant and animal species, including cattle, sheep, goats, donkeys, horses, warthogs, and hyenas. The area’s rich birdlife includes egrets and African cormorants and is a potential draw for ecotourists.

In the Mayo Tsanaga river plain, local fish species include catfish, tilapia, eel and carp, which are sold and consumed locally.  As for local agriculture, people raise and consume a variety of cereals, such as sorghum, mouskwari, sesame, finger millet, maize, and rice. The economic welfare of Bogo is determined by highly variable and unpredictable rainfall patterns that characterize Sahelian climatology. The production of food and cotton (the major local cash crop and source of income), local pastoralism, and artisanal fishing all rely on the soil/water circulation pattern maintained by the system of perennial and ephemeral rivers (known as Mayos locally).

The Bogo population depends to a significant extent on resources collected from the local environment.  For example, species such as the Baobab (Adansonia digitata), Neem (Achzadirata indica) and Acacia (Acacia faidherbia) are used as firewood, building material for canoes, and as part of traditional medicine. In addition, the deeply ingrained cultural beliefs of inhabitants of this region have guided the conservation of biodiversity and the protection of sensitive ecological zones.

The Bogo target area population comprises groups such as the Mousgoum, Moundang, Massa, Toupouri, Kotoko, Mbororos and Fulani. Only 22 percent of the population lives in urban areas, with the remaining population spread throughout rural communities in the region. Agriculture, livestock rearing, and artisanal hunting and fishing are the primary economic activities of the region, and several products, including cassava, sweet potatoes, millet, livestock, and fish, are sold locally at low prices. Agriculture is practiced on clay and alluvial soils, sandy soils or loam soils. Infertile soils are abundant as well, and often used for pasture. Farmer-grazer conflicts are common, with the main source of tension being crop destruction as livestock cross croplands to reach nearby grazing areas or watering holes.

More than half of the population lives below the national poverty line of US$1.30/day per adult, with average annual household incomes in the range of US$150-300. Local markets are not well integrated with urban markets and most economic activity is on a small scale, occurring outside the formal sector. Indeed, only 2 percent of household revenues are generated in the formal sector. Despite the region’s rich endowment of natural resources, local people are profoundly affected by the decline in agricultural productivity stemming from soil degradation and increased climate variability. In addition to this vulnerability, low levels of human development (63 of the populace are illiterate, and only 16 percent have education equivalent to secondary school or higher) create further setbacks for local communities.

A circular relationship between poverty and environmental degradation characterises the Bogo landscape, with the principal environmental and social vulnerabilities in the target landscape being: 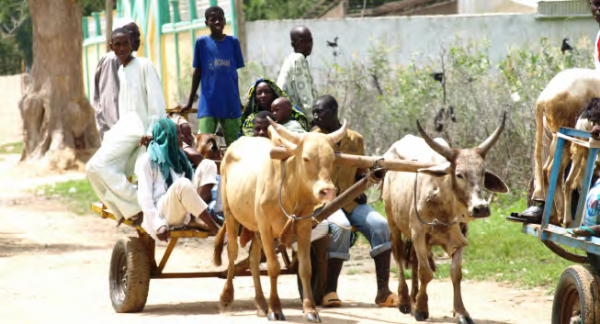 A landscape-wide Baseline Assessment was conducted in September and October 2013, based on community consultations in 8 out of 12 counties (called “cantons”) of Bogo. The assessment was organized and the consultations led by Global Mapping and Environmental Monitoring, a national NGO based in Yaoundé, Cameroon, that promotes environmental sustainability through local action and inclusive participation. A total of 330 people (including 214 men and 116 women, with an average of 28-40 people per district) scored the SEPL Resilience Indicator set to assess landscape conditions and trends.

Consultation and participatory evaluations were conducted in compliance with social conventions of the region, holding separate workshops for men and women simultaneously in each canton. This process not only increased the participation of women in the planning process but also in the implementation of the strategy.  Afterwards, focus group meetings were held with each Lawan (traditional authority in charge of a community) and Djaouros (neighborhood leader) to discuss the problems and challenges specific to the township, and to determine any need to adjust the SEPLS indicator scores based on observations and experiences of the community leaders. Finally, participatory mapping sessions were held with community members.

The findings of the consultation process were then validated during a community hearing attended by more than 200 participants, involving all 12 canton representatives (women, men and youth), including local authorities (Lamido, or chiefs), as well as local government authorities (the mayor and the sub-divisional officer for Bogo). Based on the community consultations conducted during the baseline assessment, a baseline report and a Landscape Strategy were developed. The draft Landscape Strategy, along with a participatory map of the Bogo landscape, were presented to local community representatives and traditional authorities during a stakeholder workshop. The draft strategy was then amended based on comments and observations made by the local community representatives.

The baseline assessment and community consultation process led to the development of a COMDEKS Country Programme Landscape Strategy for Cameroon, a comprehensive document that, based on priorities identified by landscape stakeholders, outlines the landscape profile, expected goals and outcomes, as well as key measures and strategies for community-based actions.

To define this vision, the Landscape Strategy is built on four interrelated outcomes meant to increase landscape resilience in four critical areas.  Table C-1 lists these landscape outcomes for the Bogo Region, along with the performance indicators that will be used to assess the extent to which these outcomes have been achieved. 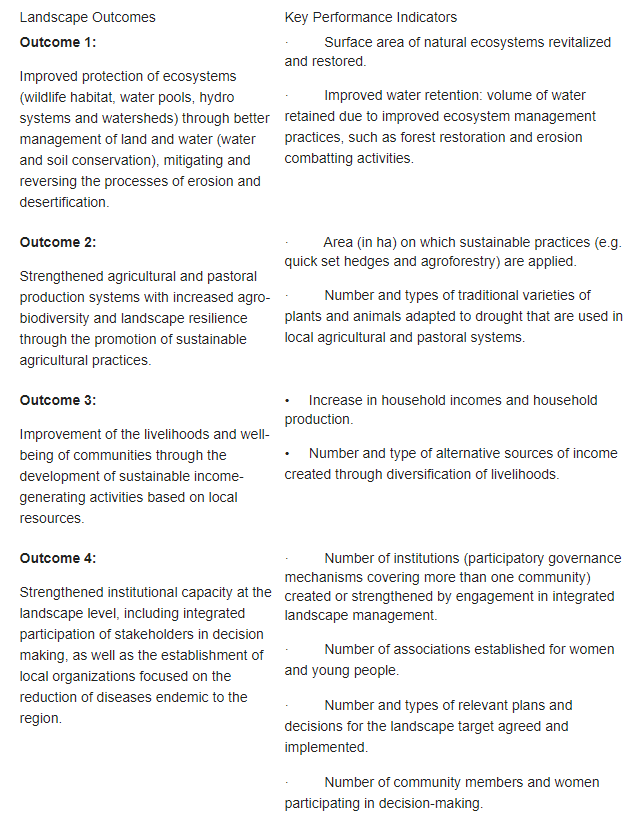 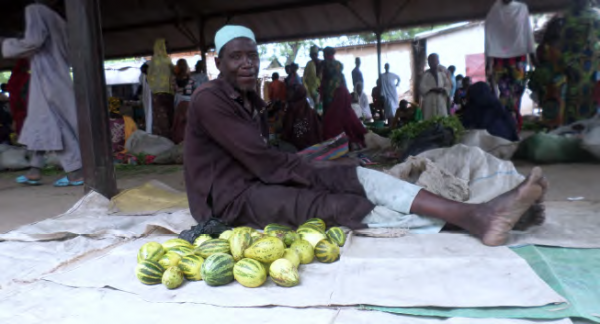 Based on the feedback from the community consultation process, the Landscape Strategy for Cameroon prioritized the following activities and interventions that together would contribute to the Strategy’s specified Resilience Outcomes:

Outcome 1: Improved protection of ecosystems (wildlife habitat, water pools, hydro systems and watersheds) through better management of land and water (water and soil conservation), mitigating and reversing the processes of erosion and desertification:

Outcome 3:Improvement of the livelihoods and well-being of communities through the development of sustainable income-generating activities based on local resources:

Outcome 4: Strengthened institutional capacity at the landscape level, including integrated participation of stakeholders in decision making, as well as the establishment of structures focused on the reduction of diseases endemic to the region: 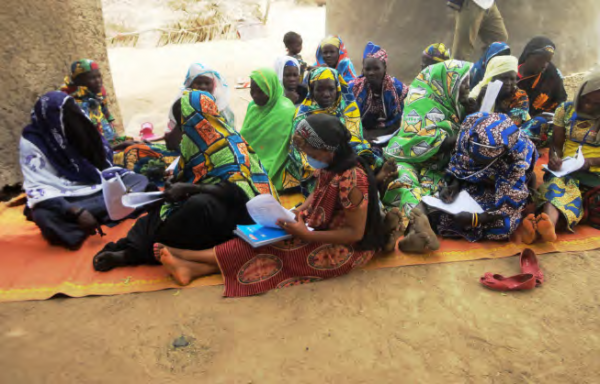 With these guidelines in mind, seven local projects were selected for Cameroon’s portfolio of COMDEKS landscape interventions in the Bogo region (see Table C-2).  The projects are spread among several communities within the target landscape, and each focuses on improving resilience of the area’s natural resources and communities.

Impacts and Achievements to Date 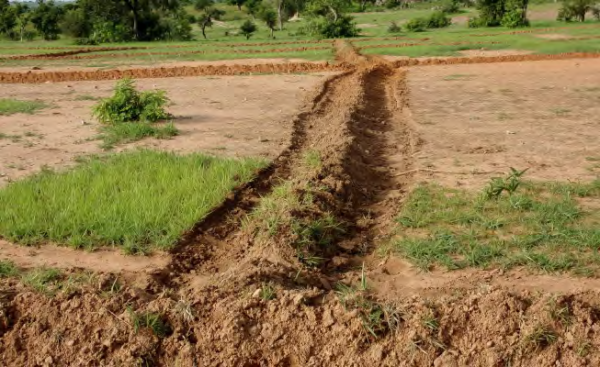 Communities in the Bogo landscape have begun to develop a greater awareness of and involvement in environmental governance. This is evident in the establishment of environment committees and project management committees to allow community members an avenue to weigh in on local environmental management decisions at the village level.  At the same time, collaboration among six villages to establish a community forest and agree on by-laws for forest management shows the beginning of a concern for environmental governance beyond the village level.  Similarly, the establishment of a seven-member committee to oversee water access projects shows awareness of the connectivity between landscape projects. Also, there has been wide participation by and support of the COMDEKS landscape activities by both traditional authorities and government institutions. Some 70 traditional authorities (including the Paramount Chief and County Chiefs) are directly involved in landscape activities, as well as the local mayor and local council members, and representatives of the Ministry of Agriculture and Rural Development, the Ministry of Forests and Wildlife, and the Ministry of Women and Family Affairs.  While these are hopeful signs of the development of a landscape ethic in the Bogo region, no landscape-wide group or forum has yet been officially established to share landscape concerns or project experiences on a regular basis.