Taiwan has nearly 2.1 million hectares of forest which is a precious asset that covers about 60.71% of the total territory. Chinese Society for Environmental Education has assisted Forestry Bureau, the central administrative authority of forestry management and biodiversity conservation, in preparing, planning, establishing, operating and training 8 Nature Centers since 2006. The forest is consequently converted into environmental education resource and provides the first-hand learning experience which can increase general public’s awareness, cognition, value and action toward forest. 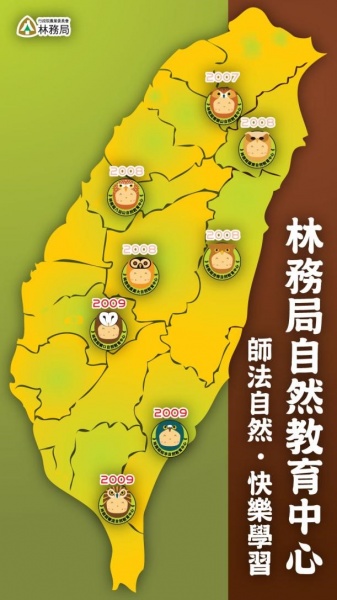 The goal of forest management and village development has changed from earlier timber production to three in one purpose of logging, nourishment and conservation. Influenced by international conservation trend and grassroots environmental movements, the forestry management has further emphasized on collaborating with advocacy groups and interested parties as “ecological system operator of new environmentalism” and thus developed multi-objectives operation model including ecological conservation, territory protection and recreation. Currently, forestry management in Taiwan has blended in public participation and co-management in the mechanism. The 8 Nature Centers instructed by Chinese Society for Environmental Education has become the platform for policy communication, value clarification and public participation and ultimately create the harmonious relationship between nature and human beings. During the process of advocating Satoyama Initiative, the centers are also the crucial foundation that play the role of “public participation and partnership” by means of environmental education, interpretation and communication.

Many members of Chinese Society for Environmental Education have devoted themselves to the establishment of Nature Centers of Forestry Bureau and promoting practices of Satoyama Initiatives since 2006. They are from area of industries, public offices and academia. 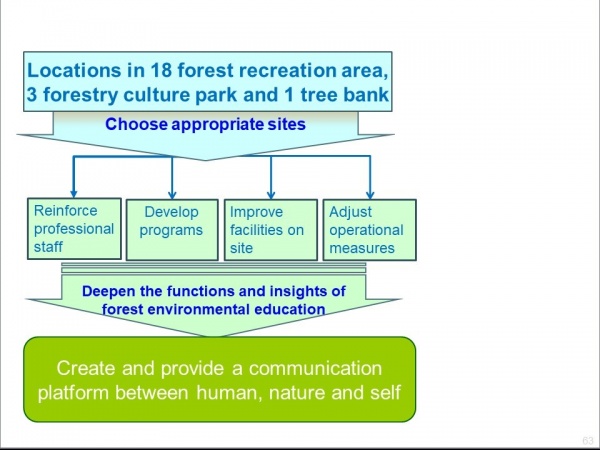 The case is a training program based on Satoyama Initiatives in 8 centers or surrounding field for local communities. The goal is to introduce the related parties to the value and wisdom within diversified ecological system service and the policies related to Satoyama Initiatives from Forestry Bureau.

The centers are considered as learning bases and an exchange platform for the related parties in order to trigger more participation and collaboration so that the “three-fold approach” from Satoyama Initiative can be blended in local communities and sustainable forestry development.

All the 8 centers put ideas of local forestry production or Satoyama Initiative actions in aboriginal tribes into program designs for achieving the following goals: The first is to reinforce the learners’ identity and participation on local movement. And the second is to increase income for local communities by providing program services.

Nature Centers of Forestry Bureau are also facilitating the Satoyama Initiative policies of Forestry Bureau and supporting related parties to take action while achieving their own mission, visions and goals. In this case, Chinese Society for Environmental Education deepens the value of forest ecology services and turns the 8 Nature Centers into the channel for conveying Satoyama Initiatives between local communities by the following curriculum development strategies.

Table 1: Missions and goals of Nature Centers of Forestry Bureau 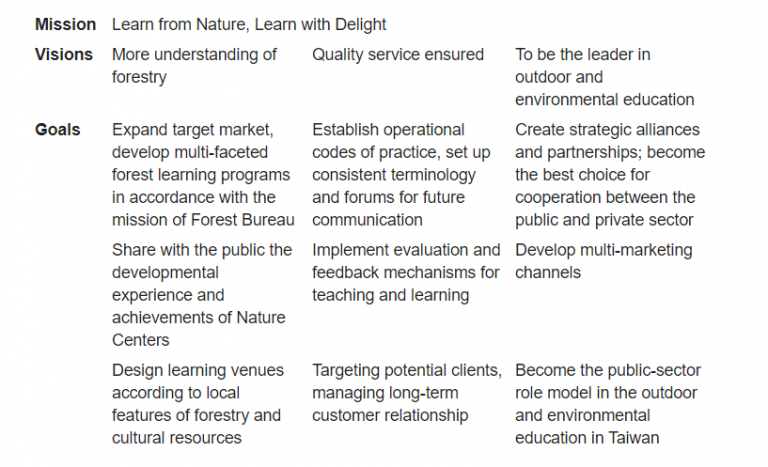 Forestry is the implement of forest science and forest science is a compound of many subjects covering phytophysiology, management, physics, chemistry and ecology etc. In addition to the formation of subjects, forestry also has distinctive culture and history which make it even more complicated. Due to the complexity of forestry, it is hard for general public to comprehend the content in forestry and can easily have cognitive bias.

Since 2011, Chinese Society for Environmental Education has initiated “Forestry Program Advancement Project” to introduce the general public and students to the duty of Forestry Bureau by ideas and methods of environmental education and to fulfill the goals of policy communication in multi-objective management in forest and value clarification of the importance, sustainability and legitimacy in forestry. 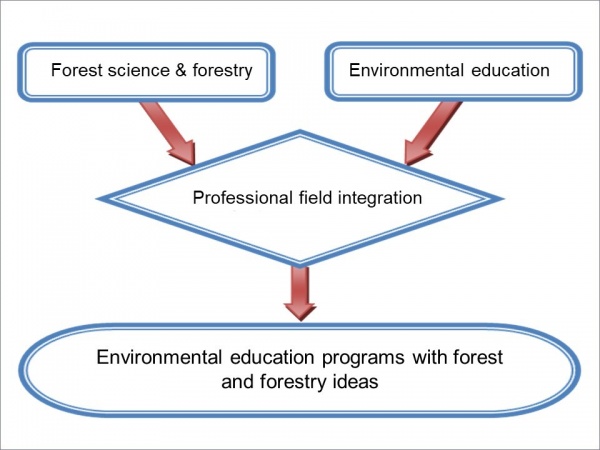 Based on the structure of forest science and forestry, the “Forestry Program Advancement Project” is divided into three aspects: resource, utilization and management. During planning the forest environmental education curriculum guidelines, three aspects are therefore condensed into three theme cores: “forest ecology and function”, “forest management and techniques” and “forest culture and ethics”. The theme cores include 9 main ideas and 35 learning objectives. The cognitive, affective, psychomotor and action domains are also included under each learning objective for program designers and teachers’ reference.

In 2017, Chinese Society for Environmental Education selected 12 programs from more than 300 forestry related programs that Nature Centers of Forestry Bureau developed in a decade and published Learn．Forest–Collection of Forest Environmental Education Teaching Material with anticipation that the publication can upgrade the service capacity of each nature center and train more “Learn．Forest” lecturers, seed teachers, local school teachers, community workers and Satoyama Initiative advocators. As a result, forest environment education can also flourish outside Nature Centers. 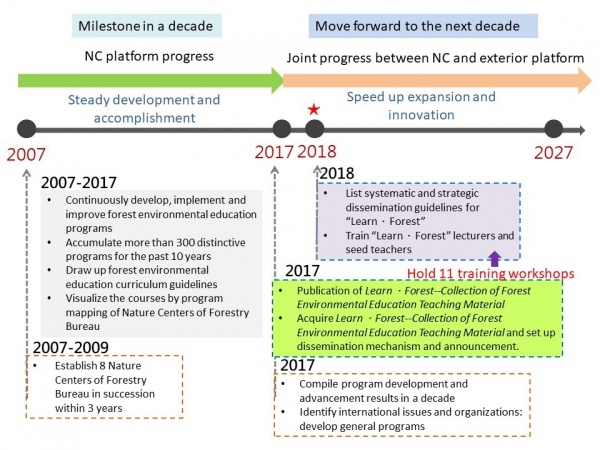 The natural and cultural resource survey have been collected as the foundation and information for program planning from the establishment of the first Nature Center in 2007. Diversified theme programs including biodiversity, forestry culture, environmental aesthetics, water resource protection, environmental ethics, energy saving and carbon deduction are developed for different learners and found sharing mechanism by physical (achievement sharing and interactive meeting) or virtual space (social media interaction, online data base and essays on “Forest News”) to share common program resources and teaching achievements within centers.

To combine environment monitoring with program design in 8 Nature Centers, Chinese Society for Environmental Education has targeted students over 11 years old and adults on designing scientific study programs and fostering both interest and ability to carry out independent study and active discovery through the process of hypothesis, survey, proof and analysis since 2011. The scientific study results from each center are not only used as feedback for administrative authorities but is introduced to schools and families to live up to environmental monitoring in daily life and carry out the concept of “mutual citizen management on environmental resources” and therefore learners are able to treasure the forest and territory.

Objectives of the scientific study programs are to foster scientific attitude and introduce scientific methods. The scientific attitude is about discarding bias and recognizing only facts and evidence. As to the scientific methods, there are 3 focuses: facts, hypothesis and proof. The first step is to identify specific question and study each aspect and every certain fact by thorough investigation, measurement and observation. The second step is to suggest hypothetical solution on specific question which is also known as hypothesis based on personal experience and knowledge. Imagination is also required to assume certain outcome from each hypothesis and whether the outcome can indeed solve the problem. The third step is to manipulate logics and experiment including comparative method, variable method and simulation method (indirect experiment) to verify whether hypothesis is a reliable fact or not. Learners can make the most of their curiosity, imagination, collected data, teamwork, scientific attitude and method to solve the problem in the diversified natural environment as a free and independent spirit.

All natural resources including forest are public property which often faces managerial challenges such as privatization issues and the dilemma that everyone has opinion but none manages. The core cause among the managerial challenges on public property is the cognitive and behavioral divergence between “public owners” and “public managers” whereas one of the solutions, the objective of this case, is to raise public awareness toward resource management. When the public managers share closer value and attitude, the managerial objectives can more likely be achieved under the premise of sustainable development.

A. Practice the sustainable essence of Satoyama Initiatives

On the aspect of economic development, the green collar industry of environmental education is not only an emerging field in combination with local features and resources but also a crucial industry to display the soft power of educational services and ease the environmental resource challenges in Taiwan. With the training and guidance from Nature Centers, communities nearby also inherit environmental education professions and live out the lives following Satoyama Initiatives.

B. Create the new vitality of forest and forestry​

Facing international and domestic environmental issues including global climate change, biodiversity, national land security and restoration, carbon reduction and increase on domestic energy, Forestry Bureau dedicates to transforming into learning organization and autonomously initiates reform when forestry management is about to change. Functions of forest have been converted as Chinese Society for Environmental Education assists the operation of Nature Center network. It is a chance to identify the opportunities and challenges of the environmental issues by supporting internal reform and improving external social values to educate the general public for taking real action. Promoting natural education, fulfilling the sustainable development spirit of “respect nature and people, complete missions on the right position”, going with the flow in nature and finding the best reform path are ways to acquire real sustainable maintenance, manage and improve each function and benefits that forest has to offer.

After viewing the current programs from Nature Centers, it can blend field features, Satoyama Initiative ideas from Forestry Bureau and the village development and sustainable forestry in nearby communities in the programs to present the new vitality of forest and forestry within the internal and external communications. 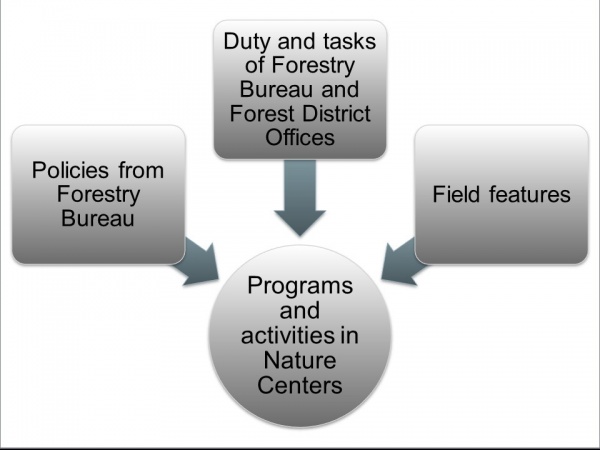 C. Achieve the goal of sustainably manage natural and cultural asset with programs

Leading learners to think about the relationship between human beings and environment by environmental education method is not only a “future management” strategy in the long run but also a “sustainable operation” method to make environmental resource last permanently. Besides direct field management or value clarification through teaching programs, Nature Centers of Forestry Bureau also accumulate environmental information of relevant field through scientific survey and environment monitoring courses. Moreover, utilizing these fields over a long period of time not only conveys environmentally friendly attitude but also one of the civil actions of “public management on natural and cultural asset”. Both the observations from the teachers and study from the learners are valuable environment monitoring data. The efforts will gradually form social atmosphere and public participation toward co-ownership, co-sharing and co-management on natural and cultural asset.

Eight Nature Centers of Forestry Bureau is both an “integration and promotion platform for forest environmental education” and a “communication channel for sustainable forestry policies”. By implanting both scientific study spirit and environment monitoring methods into program design and actively developing related courses of forest environmental education, the ultimate goals are to let more people understand the vision of sustainable forest management and to bring up responsible citizen toward environmental sustainability.

In this case, Chinese Society for Environmental Education brings authentic experience and feelings which are different from formal education to related parties for the past 10 years. It is the core value of education to learn by doing and deepen all the learning experiences about natural knowledge outside formal education in real environment. Besides soft power, programs are also a kind of intangible asset that can distribute multiple values, knowledge and skills. During the collaborative process between public and private sectors, Chinese Society for Environmental Education and Nature Centers of Forestry Bureau have achieved goals of strengthening services and wisdom from forest ecology, integrating traditional ecological knowledge and modern science into programs and unfolding values of sustainable forestry and village development to the learners and local communities. What we wish to present is to become a disseminating unit which facilitates the spirit of Satoyama Initiatives through a platform like Nature Centers of Forestry Bureau in this case. 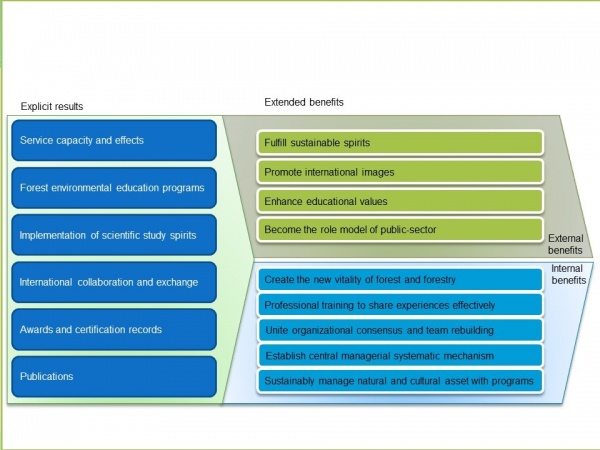 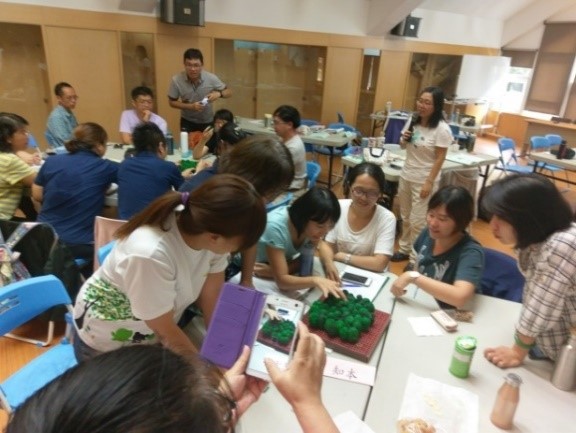 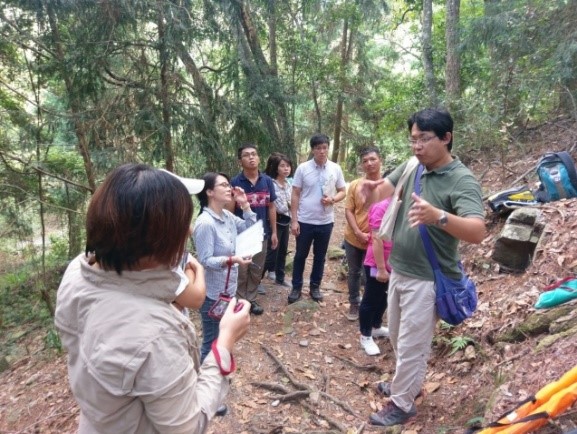 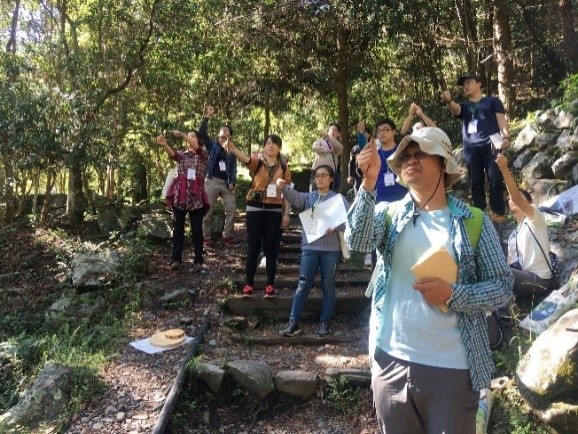 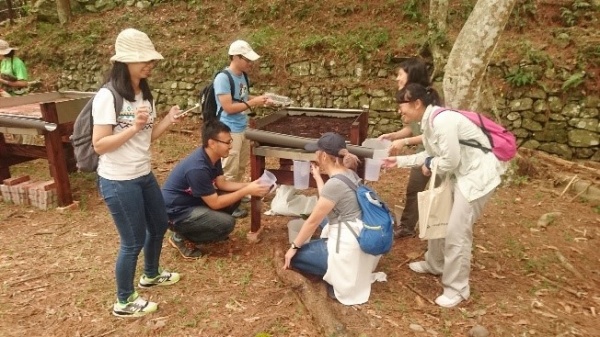 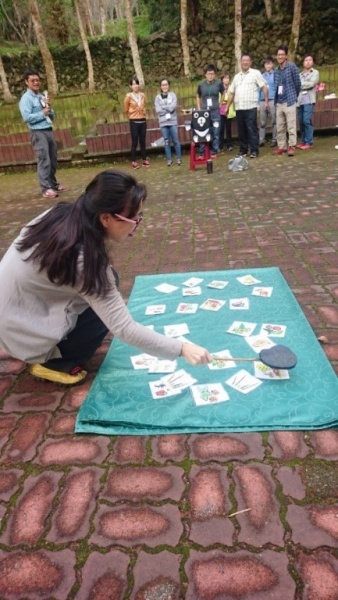 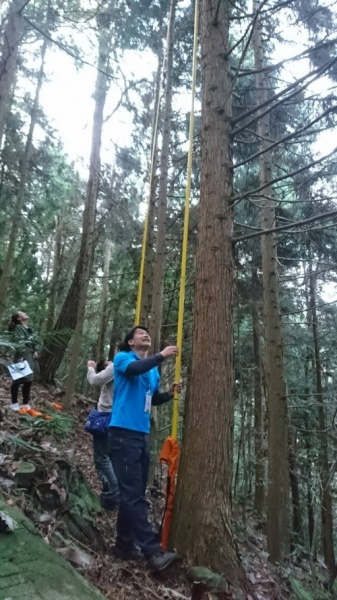 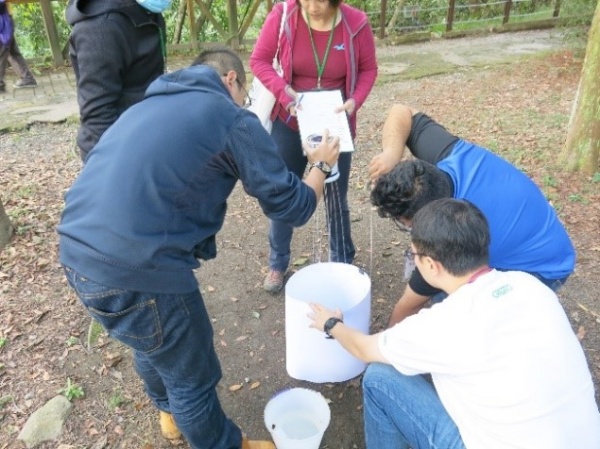 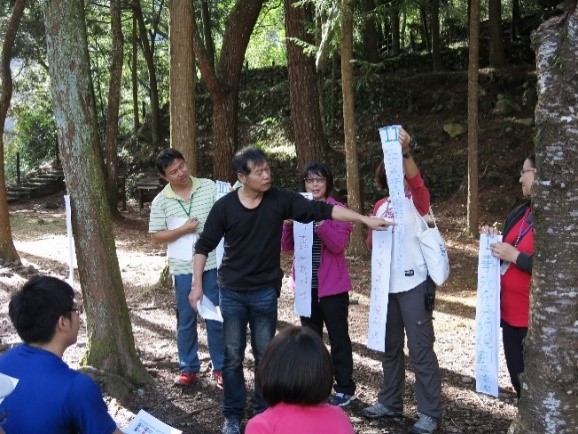 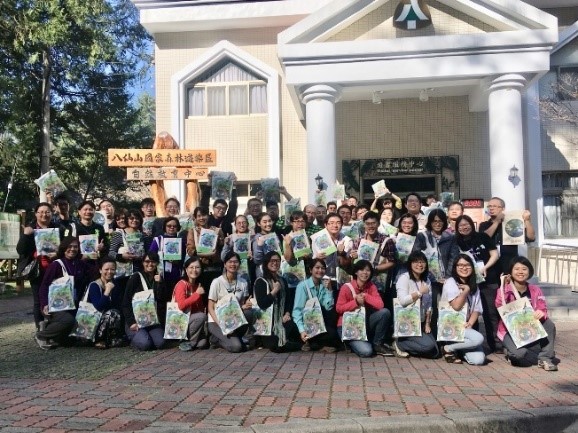 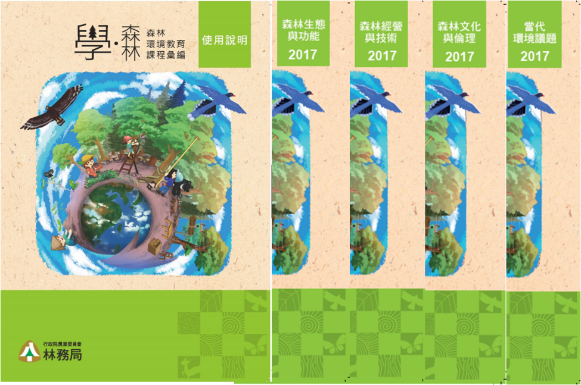