Conserving Biodiversity and Livelihood Enhancement: the case of Saviefe Communities on the Weto Landscape in Ghana 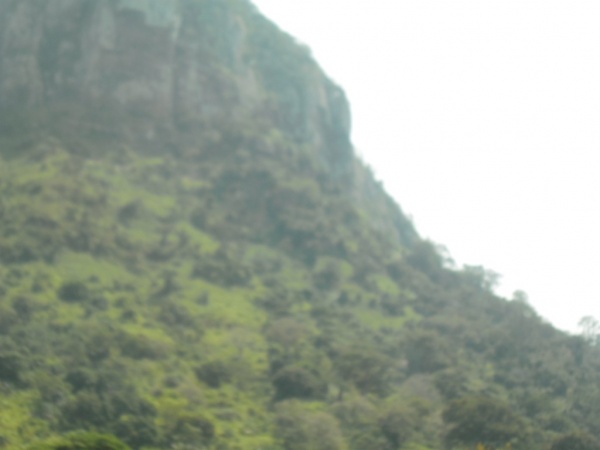 Natural Characteristics of the Area

The Saviefe traditional area is located in the Ho West District along the Weto landscape. It is an off forest reserve area measuring about 360,000 ha of landscape, made up of ten landowning traditional authorities, covering about 4 indigenous fringe communities. The range is part of the Togo-Akwapim ranges also known as the Atakora Range. It is a narrow belt of ridges and hills in the Volta region of Ghana. The ranges begin from the western part of Accra the capital city of Ghana and extend in the northeasterly direction across the Lake Volta at the Volta River gorge and finally crossing the frontier into Togo and Benin.

The average height of the range is 455 meters, with very deep and relatively narrows valleys. The highest mountain in Ghana, Mount Afadjato with the height of about 887 meters is located on Weto range. Others like Mount Torogbani, Mount Djebobo and mount Agou the highest mountain in Togo is also on the same range. There are several rivers as river Danyi, the Volta Lake, River Tsawoe, River wawa, River Menu, River Todze and other streams all taking their source from the Weto Mountain Range.

The area is classified as one of the world’s biodiversity hotspots. It contains isolated populations of several globally endangered species of animals such as pangolins and trees such as Wawa and Odum. The area is not only rich in biodiversity, but also exhibits climatic conditions (temperature range: 12 to 25 oC; two rainy seasons) with the first rains from March to July and the second from August to October. Rain fall is high in forest zones and highland areas, compared to the adjoining lowlands. 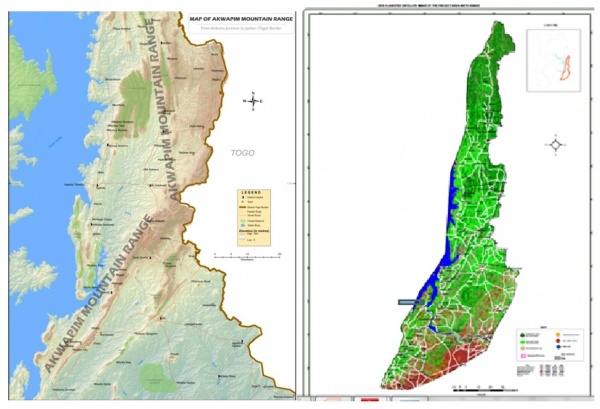 The communities along the Weto Range comprises settlements of different ethnic group of people but have Ewe and English as common medium for communication.  Some of the settlements are Kpale, Saviefe, Goviefe Kowu, Vane, Amedzofe, Nyabgo, Asante-Kpoeta, and Logba.  Other settlements include Kpando, Botoku, Sabadu, Vakpo, Sovie and Anfoega communities. The peoples of these ethnic groups have different settlement histories and stories and speak a variety of dialects that can be grouped into Ewe and Guan languages. History has indicated that, the ancestors of the Nyagbo people originated from Efutu,  Winneba in the Central Region of Ghana, while the Amedzofe, Vane and other Avatime groups relocated to the mountain from Ahanta in the Western Region of Ghana during the Asante war.  The peoples have settled and interacted in relative peace over three to four centuries and have developed together by way of life and cultures that are not only influenced by their mountain environment but also by the diversity of their historical and social  backgrounds.

Hunting, farming, and petty trading are the main subsistence activities of the people. They are into mix-cropping mostly along the mountain slopes, flat terrain, in valleys and downhill. Major crops cultivated are plantain, oranges, pineapples, rice, maize, cassava, legumes, oil palm and variety of vegetables, cash crops like cocoa and coffee. Some of the farmers take hunting as hobby; they exploit wildlife along the slopes of the mountain range as income support.

The lack of employment opportunities for the young ones has prompted them into the use of chainsaw operations for commercial and domestic wood production for income generation which is fast degrading the physical environment.

The Weto Landscape is classified as a biodiversity hotspot in the world. However, the natural resources of the landscape, especially its biodiversity has been experiencing degradation for generations now, from human unsustainable livelihood and basic needs satisfaction activities and approach. Thus, the natural resources of the Weto landscape have been utilized over the years without sufficient scientific management plans.

Unsustainable farming practices such as slash and burn; excessive hunting of wildlife resources, bush burning, indiscriminate tree harvesting, unguided agrochemical use; unconventional fish harvesting; have resulted in one environmental problem or the other. Thus, the Weto Landscape is now faced with issues of climate change; soil infertility and land degradation; dwindling water resources; trees and wildlife resources. Consequently, farming which is the main activity in the landscape has not been rewarding for some years now due to low/reduced rainfall, and soil infertility resulting in low harvests and reduced income.

The resource degradation is in ascendancy as the people tried to resort to adhoc measures to address the issue of deteriorating lifestyle as a result of low income induced poverty. There was therefore the need to adopt strategies that adopts planned and sustainable resource use that would reduce poverty and consequently result in resilience of biodiversity and other natural resources of the Weto Landscape. The damage in Weto Landscape has not gone beyond resilience and purposeful activities could result in a thriving Weto landscape.

In Saviefe Agorkpo, Gbogame, and Deme communities; the once luxuriant mountain high forest vegetation has been reduced to secondary forest through chainsaw operations, unfriendly agricultural practices unthinkable annual bushfires. Large stock of bamboo forest is under threat of wanton clearing for farming as well as bushfires. Land use plan does not exist. Farming is done unscientifically on the mountain slopes.

Traditional sacred groves are also under threat of destruction engineered by Christian faith against believes that preserved them. Caves and streams have not been developed for economic gains through ecotourism due to lack of education and guidance to do so. 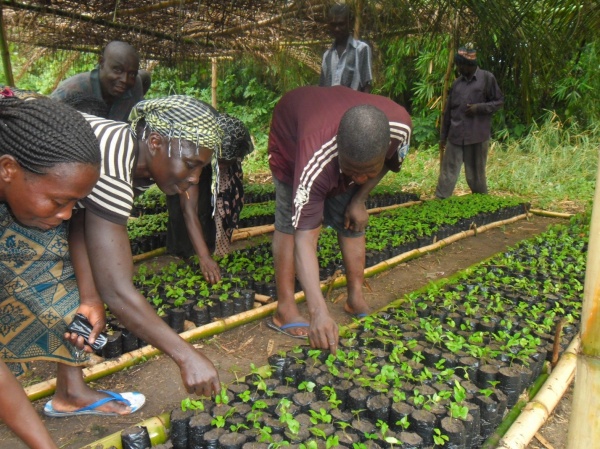 The project outcomes are based on the fact that communities would be educated and would participate actively in all the project activities. Thus, youth groups, school children, women groups, landowners, traditional rulers all played their roles and received benefits accordingly. Community assets were also built to achieve the outcome. 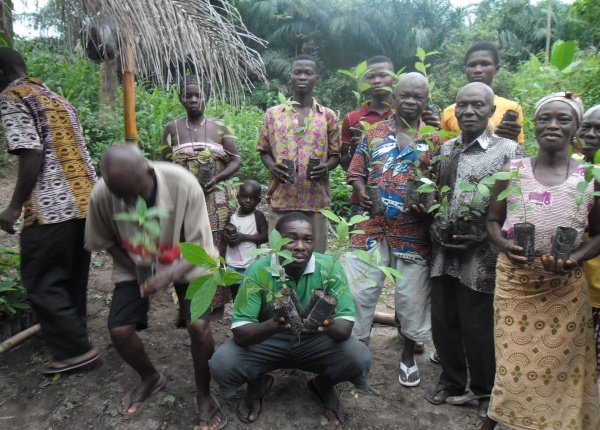 Farmers receive seedlings for planting on their farms

OUTCOME 1: Natural Resources and Semi – natural resources and ecosystem services within the Weto Landscape are conserved.

OUTPUT 1: 200 people were trained to invest in sustainable land management, as well as 6 institutions received capacity building to participate in natural resources management

To achieve this outcome, landowners were involved actively in discussion on identification of valuable natural and semi – natural resources on their land and what to do to conserve them. The capacity of the landowners and their tenant farmers numbering 100 were built and supported to identify and implement innovative strategies, procedures and opportunities to invest in sustainable land management. Generally, the landowners and the communities with the collaboration of Forestry Commission field officers demarcate lands and did boundary planting,

The following planned activity was executed:

The project established tree nurseries – close to500, 000 seedlings nursery of timber, woodlot and fruit trees including Ofram, Mahogany, Orange, and Cocoa was established in the project area. Sacred groves protection was also encouraged.

The seedlings were used to establish agro forestry farms and boundary planting, to benefit over 200 farmers, schools and all landowners. Proceeds from this activity were shared to benefit individuals and the community vault. Community members were trained to run the nursery and, community labour was used to do the boundary planting.

Bush fire management – 20 persons per community were trained as Fire Volunteer Squads to assist. Community labour was used to construct fire belt in specific biodiversity areas and community boundaries, as well as create green belts to prevent spread of fires. 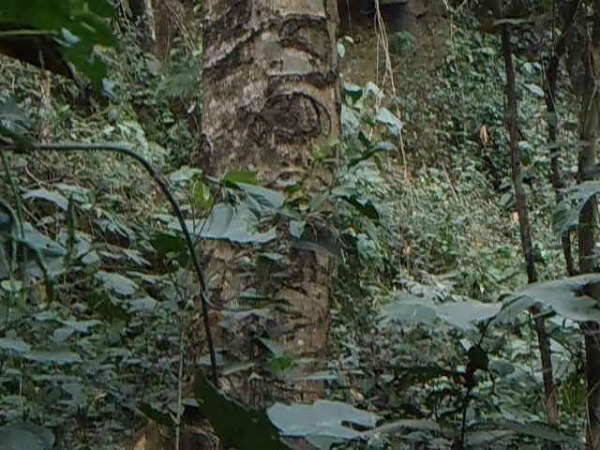 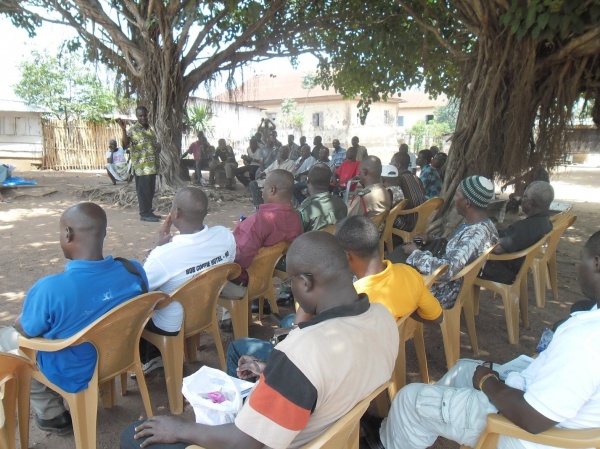 OUTCOME 2:  Sustainable agricultural practices implemented across the landscape to enhance and revive traditional conservation and production practices and adoption of new technologies.

To achieve this outcome, practical demonstration activities was carried out in the project communities by agriculture extension officers on rice, cocoa, maize and vegetables demonstration farms established by the project. Twenty (20) persons per community were trained in special workshops to assist in technology dissemination in the communities in addition to the extension officers’ activities. In all, about200hs of land was put under sustainable agricultural practices by individuals and groups. Cocoa and Citrus production was used to promote biodiversity, while traditional crops grown in the area were put on demonstration sites while new ones introduced.

OUTCOME 3:  Strengthened institutional capacity at the landscape level to realize the goal of integrating conservation and production in the management of Weto Landscape. 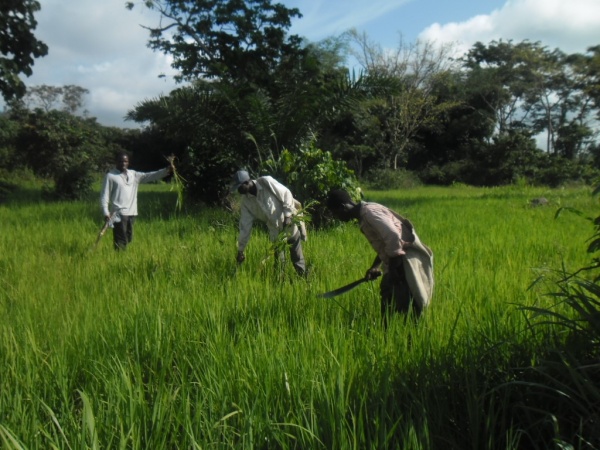 To achieve this outcome capacity building was undertaken for Traditional Rulers, Fire Volunteers, Church Groups, Community Forest management groups and producer associations totaling ten (10) groups to participate in resource management. The environmental committee of the district assembly was a target beneficiary of this outcome. Also, environmental school clubs were formed in schools in the project area and assisted to undertake educational programs and projects. Regular meetings and fora was   organized, where agreed upon issues are captured into bye laws in the area on land, trees, animals, river system etc. 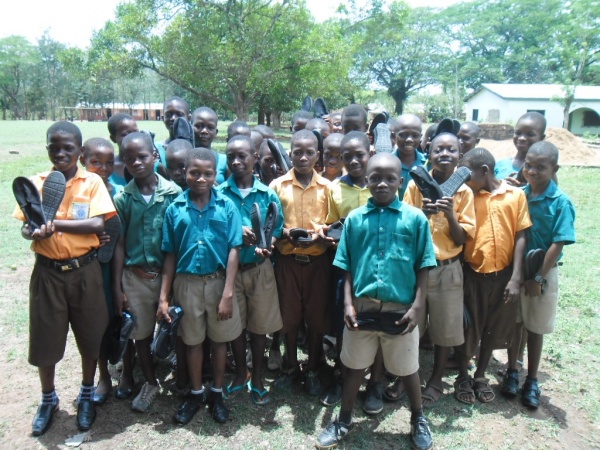 The project recorded a significant improvement in the ecology of the Weto landscape, and the general socio-economic benefit of community members. The project established two nurseries of Cocoa, Terminalia superba (Ofram) Mahogany, Cedrella, Teak, and other indigenous tree species to rehabilitate degraded areas in project communities. In all about 200 ha have been placed under natural regeneration and enrichment planting.

In Agorkpo the project has established community strict protected areas governed by the community authorities in respect of their ecological and cultural values as sacred groves, traditional caves, shrines and ecological sensitive areas.

Livelihood enhancement has also been developed in the project communities; livestock rearing as pigs, rabbits, goats, beekeeping, grasscutter rearing and the processing of non-timber forest products (NTFPs) as additional household income. 100 beehives have been constructed and established an apiary in our project area for beekeeping.

The project has also formed environmental school clubs in all project community schools, this is to create environmental awareness and educate conservation practices to the children at that early stage.

Participatory land use planning initiated in the project has not gone well initially with land owners, they feared we were introducing land alienation; this took some time of sensitization before some of them were able to compromise.

Sensitization on the promotion of ecotourism in the areas of development of sacred sites as community traditional protected areas and reintroduction of lost festivals because of Christian believes to promote ecotourism, was readily accepted by the people.

Community members have realized the importance of rehabilitating the degraded areas and also stop the activities that promote deforestation; and readily adopted tree planting activity involving some of the indigenous and economic tree species for planting.

The introduction of high breed cocoa and coffee species in the conservation program has improved the income level of most farmers; and also encouraged themto take up livestock rearing as additional income generating activity.

The realization that, communities need the support of collaborating government institutions or duty bearers which are not up to their responsibilities for development of the people, made the communities to begin exercising advocacy measures on their local government authorities.

Some challenges were, some community members, especially the youth were more interested in their daily income activities than participating in project activities which might not bring immediate income.

Our acknowledgement goes to COMDEK/GEF/SGP and Satoyama Development Mechanism (SDM) for which projects along the Weto landscape was implemented. Our gratitude also goes to the traditional authorities and farmers along the landscape for their support without which the project could have not been implemented successfully. We thank the Ho west District Assembly, Forest Services Division, Wildlife Division of the Forestry Commission, Ghana Fire Service, Environmental Protection Agency, Field officers of the Ministry of Agriculture for their collaboration for the successful implementation of the project.