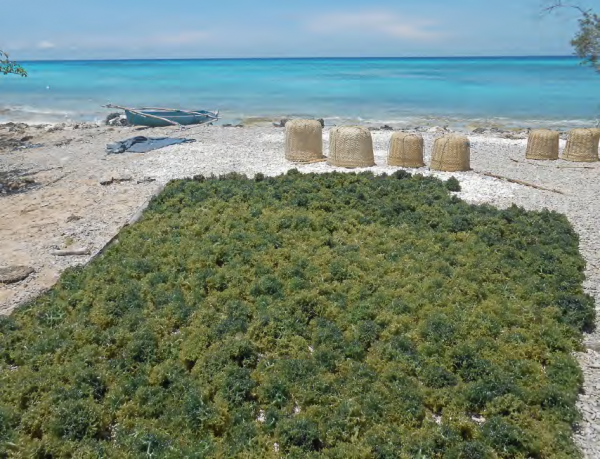 The target area selected as the focus of the COMDEKS project in Indonesia is Semau Island, which is a 265-km2 island located in the western portion of Kupang District, the Capitol of East Nusa Tenggara Province. Semau Island borders the Sawu Sea in the south, west and north, and the Semau Strait to the east. Administratively, the Island is part of Kupang District and is divided into two areas: the Semau Sub-District in the North, consisting of eight villages, and the South Semau Sub-District in the South, consisting of six villages.

Semau Island is a lowland island with the average highest points at 50 m above sea level. It consists of coral and limestone, with a thin layer of soil on the surface. Most soil types found in Semau Island are Mediterranean, latosol, and alluvial with alkali saturation and limited clay content, particularly kaolinite, making it nutrient poor.

For generations, the communities of these 14 villages have survived on the available agricultural and marine resources of the small island.  Located in the Wallace bioregion, the island is host to rich marine, terrestrial, and coastal biodiversity. However, given the limited freshwater supply and thin soil layer, both agriculture and biodiversity are increasingly threatened, and the island faces a disproportionate risk from climate change and extreme weather.

Semau Island is a rich ecological habitat hosting monsoon forests, and the surrounding Sawu Sea is home to one of the world’s richest coral reef covers. The Sawu Sea is also a critical habitat and migration corridor for 18 sea mammal species, including two endangered species: the blue whale and the sperm whale.

The local monsoon forest consists of tree species shedding their leaves during the dry season and growing new foliage during the rainy season.  Some of these species are particularly significant to the lives of the Semau people, as they are used to build houses and boats, and are also sources of food and medicines.  In addition to threats from climate change, biodiversity on the island and the surrounding sea is threatened by the excessive use of chemicals in agriculture, which decreases soil fertility and results in chemicals in the soil being carried to the oceans through rainwater. The use of chemicals in agriculture rose in the last two decades and has increased ever since the community was introduced to vegetable seedlings and hybrid corn. Because land cultivation with mechanical equipment is difficult on the karst terrain, farmers rely on herbicides and pesticides to assist with land clearing and weed control. After the land is utilized for farming for 5-6 years, farmers are forced to abandon it with the expectation that the soil fertility will gradually recover. Additionally, deforestation is a serious threat, with trees being cut faster than they can be replenished. 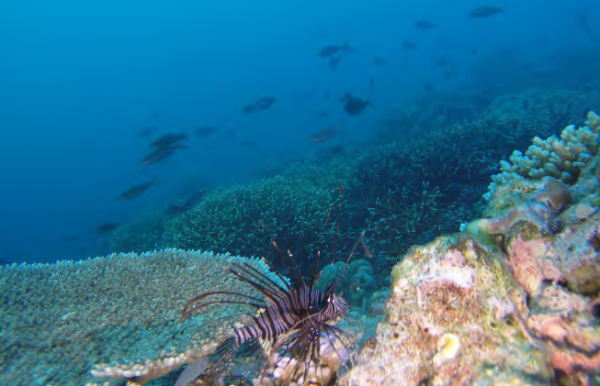 In 2013, the population in Semau Island numbered 11,756, with an average population density of 44 people per square kilometer. The majority of the island’s inhabitants belong to two ethnic groups with different cultures and languages: the Helong and the Rote. Until a few years ago, clan leaders governed the distribution of land. Today, the Village Government regulates the utilization of the coast and adjacent shallow waters (extending several hundred meters from the coastline). The people of Semau Island largely depend on farming and fishing for their livelihoods. Seaweed farming, which only started in 2001, has become the main source of income for communities living along the coast. When freshwater from wells is available, short-term cash crops such as fruits and vegetables provide another source of income besides fishing and seaweed farming. Rice and corn, on the other hand, are the community’s primary source of food, and these locally grown staple crops are largely kept for family consumption. In addition to farming, raising livestock is important to the people of the island.  Fishing occurs throughout the year, except for the rainy season when the monsoon brings high waves and strong winds. Development in Semau Island has been slow, as a number of people believe that the Semau people have magical powers, and prior to 2000, government officials were often reluctant to be sent to Semau Island, resulting in a lack of development initiatives in this region.

The principal environmental and social vulnerabilities in the target landscape are related to the availability of water and inappropriate agricultural practices and land use. Particular challenges include the following:

On November 14-20, and December 14-17, 2013, the Bingkai Indonesia Foundation conducted a baseline survey to determine conditions in the target landscape. Active participation of local communities and other key stakeholders in the Baseline Assessment was assured through literature reviews, field observations, community interviews, and a participatory assessment of community resilience. The assessment used indicators of socio-ecological production landscapes and seascapes (SEPLS), developed by Bioversity International and the United Nations University, to help measure and understand the resilience of the target landscape. Indicators were adjusted to reflect coastal and sea areas, and one indicator was added to adopt characteristics of small islands and climate risk. Nine small group discussions and six individual interviews with village leaders were initially held. To foster women’s empowerment and their effective participation in the planning process, 24 of the participants were women, and two of the small group discussions were attended exclusively by women.

A workshop assessment was subsequently held to assess the SEPLS indicators, consisting of 25 participants, five of whom were women.  Following this, a second consultation was conducted (33 men, 4 women) to present the results, to discuss key problems and to identify activities that could contribute to the long-term sustainability of the target landscape. Some of the main areas of concern identified were the lack of access to freshwater, the adverse impacts of overuse of chemicals, the need for greater ecosystem protection, and the need for increased agricultural/aquaculture innovation and knowledge. 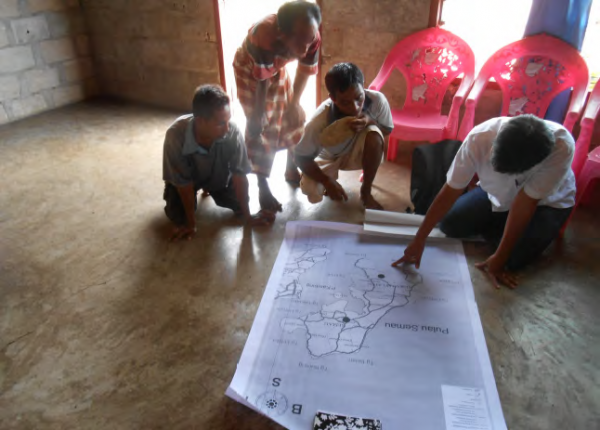 The Baseline Assessment and Community Consultation gave rise to the COMDEKS Indonesia Landscape and Seascape Strategy, which sets out a slate of four Landscape Outcomes and associated indicators to measure progress toward these outcomes. This long-term plan strives to improve the social and ecological resilience of small island and coastal communities through community-based activities.

Table I-1 lists the four Landscape Outcomes around which the strategy is built, as well as the performance indicators that will be used to measure progress toward these outcomes.

Table I-1. Landscape Outcomes and Indicators from the Indonesia Landscape and Seascape Strategy 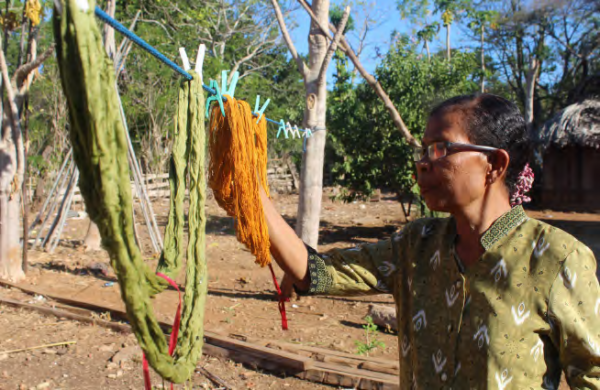 To guide the selection of local projects, the Landscape Strategy for Semau Island suggests a number of activities that would contribute to the accomplishment of each Resilience Outcome:

Outcome 1: Preservation of island ecosystem functions through the maintenance of forest cover, as well as coastal, marine, and coral reef systems, and the promotion of sustainable resource use practices:

Outcome 2: Enhancement of the resilience of agriculture and mariculture systems through improved and sustainable cultivation practices, diversification of crops, and improved management of water sources: 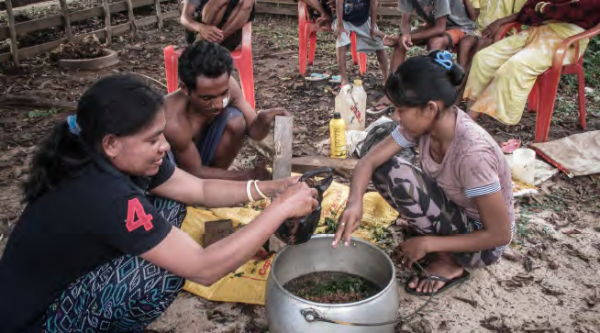 Based on this guidance, six local projects were chosen as COMDEKS Indonesia’s portfolio of landscape initiatives in Semau Island, with grant amounts ranging from US$5,000 to US$50,000. 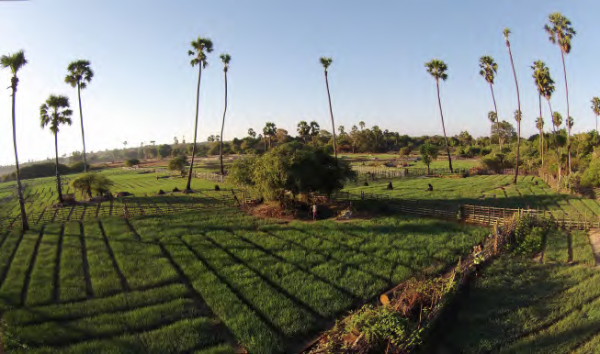 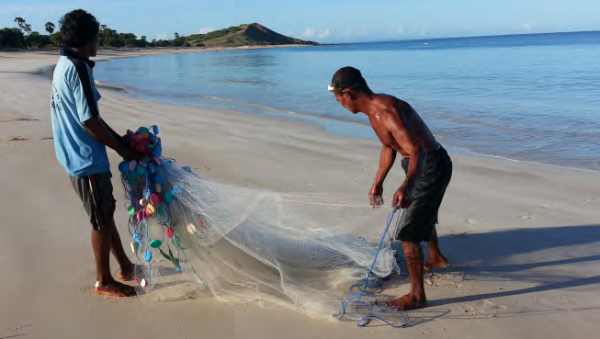 Fishing and seaweed farming are the major sources of income in Semau Island, COMDEKS Indonesia

The establishment of so many local environment-focused community groups and the forging of a considerable number of formal, written environmental commitments at the village level is evidence of a strong participatory trend among Semau Island communities in environmental governance. As yet, this interest is mostly confined to local village matters, and is also mostly segregated into clan and ethnic groups. To date there has been little mixing among the two different ethnic groups, who tend to live in different areas and work in different enterprises. This is also true of COMDEKS projects, which tend to be focused within one ethnic group or the other.  On the other hand, the seven different Environmental Forums have established a mechanism for inter-village meetings to discuss issues that reach beyond the village level, which could be considered the beginning of an island-wide landscape community. In addition, COMDEKS groups have also met to share lessons among themselves, and there has been robust support from government and clan leaders of all COMDEKS projects, creating a fertile environment for future collaboration. 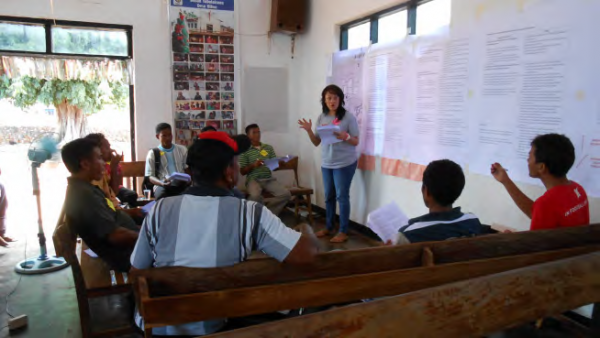 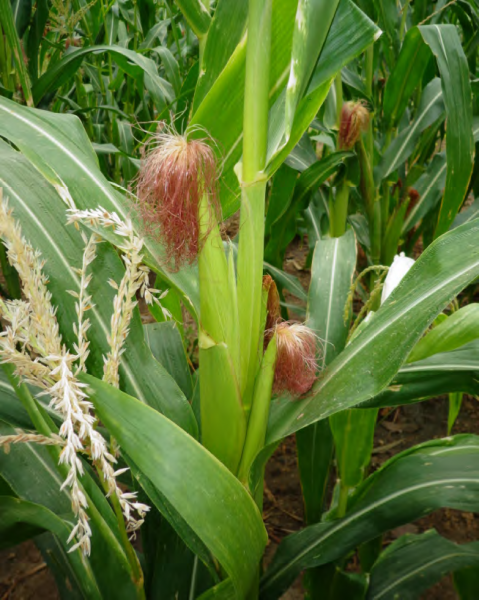