Facilitating the Development of a “Taiwan Partnership for the Satoyama Initiative” (TPSI), 2014-2017

Being small with a large population, Taiwan experiences great pressure in land development. The middle and lower reaches of Taiwan island are mainly occupied with rural and urban areas. 80% of population is concentrated in urban areas which covers only 13% of Taiwan’s total land, while nature and rural areas cover 58% and 29% respectively (Lee, 2016). In the past in rural areas, livelihoods of local and indigenous communities depended on environmentally friendly agriculture, forestry, fishery and livestock farming. Impacted by urbanization, conventional farming and climate change in recent decades; however, rural areas have been suffering from problems including aging, production landscape deterioration, economic depression, and traditional ethics and culture disappearance.

The negative impact on biodiversity of reduced human intervention in nature has become a problem in Taiwan. Due to changes in resource use such as the decline in the use of wood as a fuel and the decreasing and aging population of people managing forests and farmlands, the agricultural production landscape complex is no longer being maintained as it once was. Consequently, species that live specifically in this secondary natural environment that has been maintained by human intervention are now in danger of extinction. In contrast, the populations of wild deer, boar and monkeys have been expanding rapidly and are having an adverse effect on ecosystems and are causing severe damage to the agriculture and forestry industries and to livelihood of rural communities.

The integrity and connection among forests, rivers, human settlements and seas in natural and rural areas of Taiwan thus are in need of integrated approaches to conservation, revitalization and sustainability. There is an urgent need to reposition the roles and functions of rural areas in Taiwan. Through conservation and revitalization of socio-ecological production landscapes and seascapes (SEPLs), it is likely to enhance the reciprocal exchange between rural and urban areas as well as restore the key role of rural areas linking natural and urban areas in Taiwan.

Challenges faced in promoting Satoyama Initiative in Taiwan can be reviewed from the following four angles:

Despite of the fact that Satoyama Initiative has been very welcomed by the Taiwanese government and the public, and there have been more and more relevant reported practices in line with goals of the Satoyama Initiative, a large part of agricultural production landscape has been contaminated by conventional farming; that is to say chemical fertilizers, pesticides and herbicides. According to statistics, certificated organic farming has been applied to merely 1% of arable land. The answer to how to facilitate environmentally friendly farming in rural areas in Taiwan in order to boost the effects of socio-ecological production landscapes/seascapes still awaits to be solved by a more integrated landscape approach.

Before 2014 in Taiwan, only Forestry Bureau had called for national and international Satoyama Initiative conferences to offer interactions and promotions. Nothing like a government institution had yet taken up the role of a national promoter to propose an integrated policy and strategies in pushing forward Satoyama Initiative in Taiwan. Even though Forestry Bureau’s work on rice paddy and wetland restoration programs had brought attention, it was true that there was a strong need to have more comprehensive and integrated policies and strategies.

Even though it is true to say that the notion of Satoyama Initiative had gained a certain degree of governmental and civil popularity in Taiwan; most of the people simply understood it literally as terms like sustainable development and ecological tourism, and thus have different interpretations, which had eventually led to misunderstandings and disagreements in terms of consensus and actions. There had been some research reports and popular science articles that introduced the core concept, values, goals, promotion framework, and good practices of the Satoyama Initiative the international to Taiwan in 2011-2013; still, studies on domestic practices were academically insufficient in the way that they lacked comprehensive analyses and discussions of domestic experiences based on on-the-ground works.

There was a need for good practices in accordance with Satoyama Initiative’s vision, approach and action perspectives, namely the ‘three-fold approach.’ In addition, such practices in Taiwan also lacked analytical reports on detailed planning processes, management frameworks and implementation outcomes. As a consequence, local Satoyama Initiative practices in Taiwan were mostly outcome demonstrations and explanations which were not comprehensible for international or domestic societies to learn from and refer to.

A first draft of the National Strategic Framework for Promoting Satoyama Initiative in Taiwan, including 5 aspects of activities including enhancing international participation and exchange, working on policy research and strategic framework, facilitating knowledge of indicators for monitoring, enhancing capacity building and knowledge exchange through networking regional on-the-ground activities, was proposed by NDHU in 2014 and adopted by the Forestry Bureau in 2015.

TPSI is to build up a national multi-stakeholder partnership network in which stakeholders pool their complementary strengths, resources, assets and knowledge for solving problems in a holistic and synergistic manner. The objective of TPSI is to work with IPSI on implementation of activities under the Satoyama Initiative around the whole islands, Taiwan (Figure 1).

In TPSI framework (Figure 2), ‘think global,’ ‘adapt national’ and ‘act local’ are considered interrelated hierarchical concepts which help to sort out the targets and tasks. There are two targets and five task activities for the TPIS project 2014-2017 as follows:

The first target, corresponding to ‘think global’ and ‘adapt national,’ is about addressing issues of SEPLs and formulating solutions. Three task activities related to the first target include enhancing international participation and exchange, working on policy research and strategic framework for implementation as well as facilitating knowledge of indicators for monitoring. 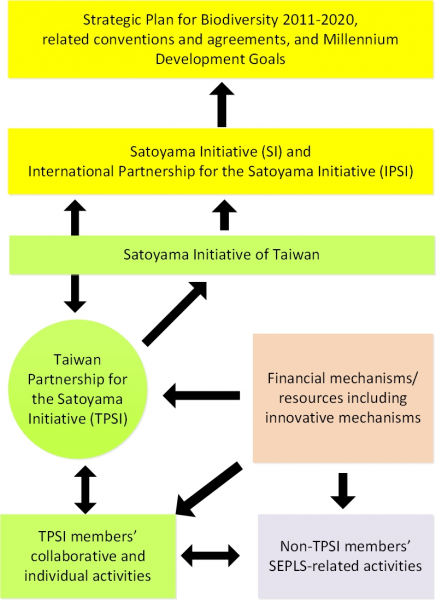 Figure 1. Relationship between the Satoyama Initiative, IPSI and TPSI (revised from IPSI Strategy, 2012) 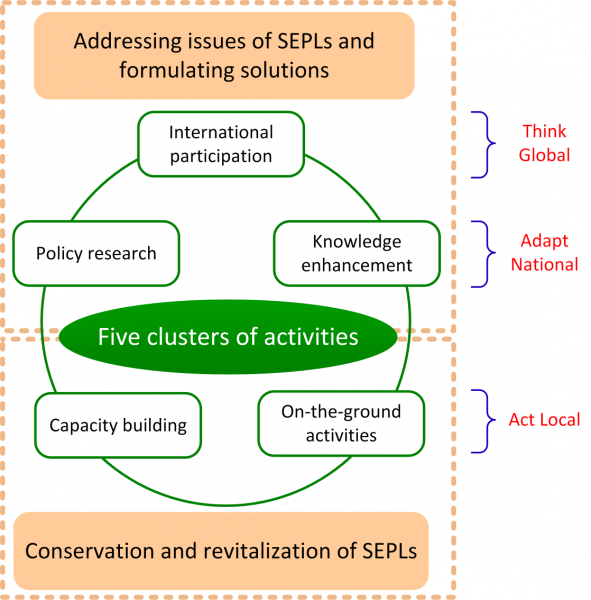 Figure 2. A Strategic Framework for TPSI (based on IPSI Operational Framework, 2010)

Key stakeholders involved in the project and their roles

In 2014-2017, the National Dong-Hwa University (NDHU) was commissioned by the Taiwan Forestry Bureau to conduct a four-year Project for the development of a Taiwan Partnership for the Satoyama Initiative (TPSI, Figure 3). The key activities and outcomes are analyzed as follows: 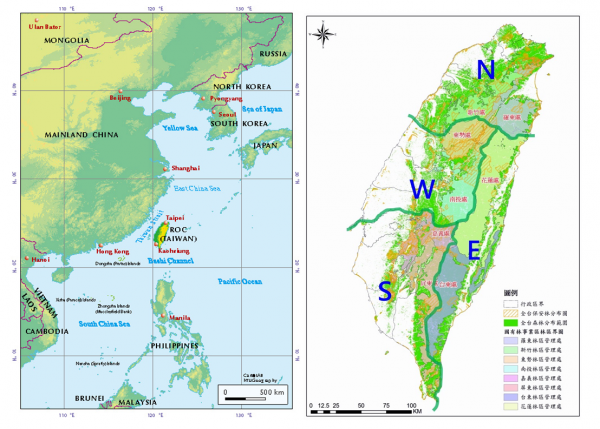 The main tasks and outcomes of the first two-year TPSI Project are as follows:

The main tasks and outcomes of the Extension Project for TPSI development in 2016 in terms of IPSI’s clusters of activities are as follows:

The main tasks and outcomes of the Extension Project for TPSI development in 2017 in terms of IPSI’s clusters of activities are as follows: 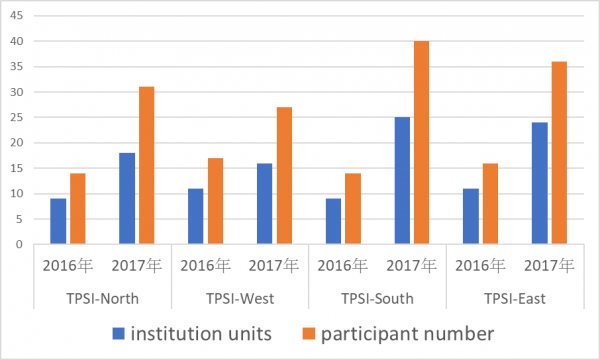 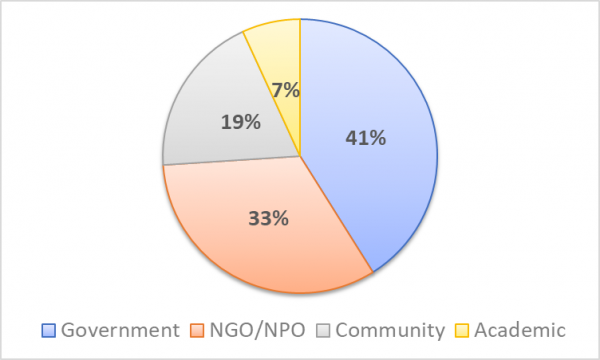 We would like to show our gratitude to the Institute for Global Environmental Strategies (IGES) and the United Nations University Institute for the Advanced Study of Sustainability (UNU-IAS) for their financial and administrative supports of the SDM 2016 project on ‘Facilitating the Development of a Taiwan Partnership for the Satoyama Initiative (TPSI).’

Website of the Forestry Bureau, Council of Agriculture, https://www.forest.gov.tw/EN

News (25/11/2016) about the ‘As they become members of IPSI, Forestry Bureau and Tse-Xin Organic Agriculture Foundation receive international recognition’ https://www.forest.gov.tw/EN/forest-news/0060005

A Capacity-building Workshop on TPSI Extension for administrative staffs from the Forestry Bureau Headquarters and its 8 district offices was held in 8-9 Aug 2016, Taipei 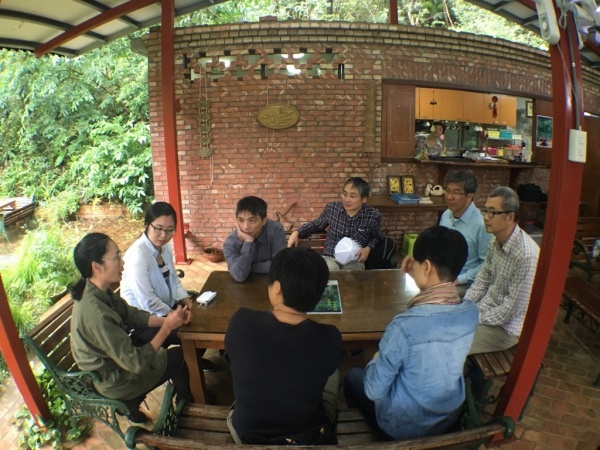 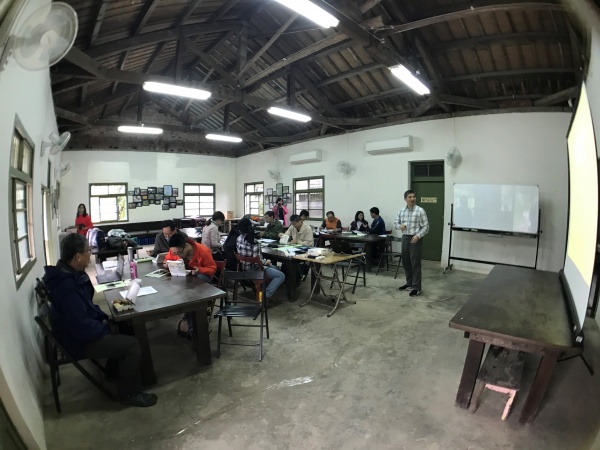 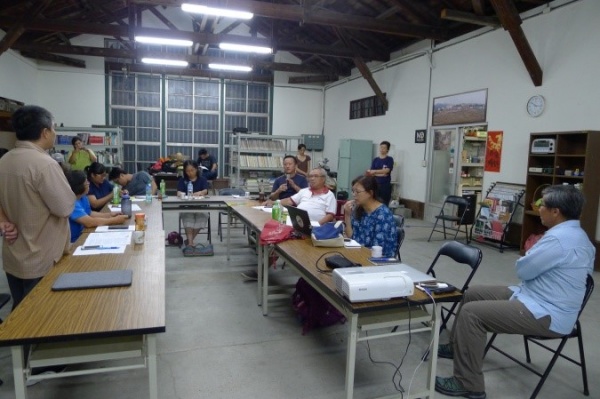 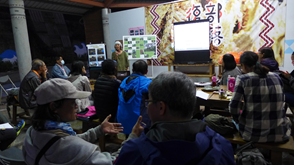 Field trips of the TPSI-E in Xinshe village, Hualien 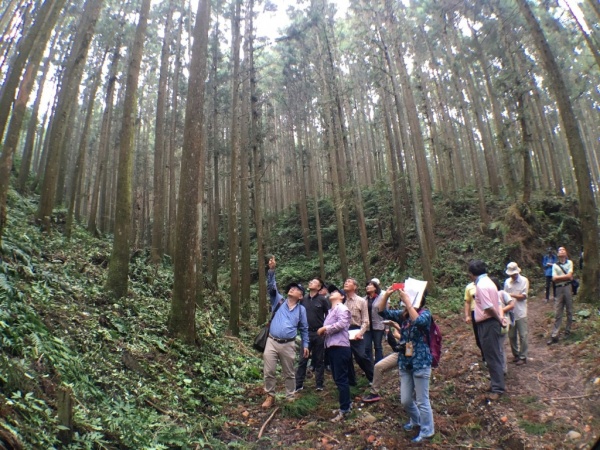 Mr. Kazuaki NAGANO from MoE Japan and Mr Toru HAYAMI from the Hayami Forest were invited to visit FSC forests in Taiwan on 18 Oct 2016 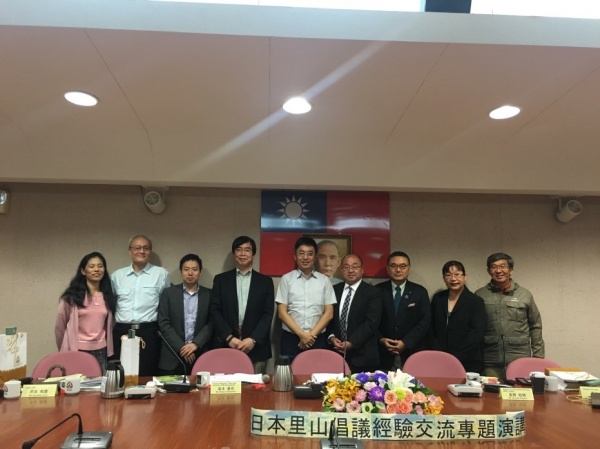 A Symposium for exchange of the Satoyama Initiative experiences between Taiwan and Japan, 20 Oct 2016, Forestry Bureau, Taipei

A Capacity-building Workshop on TPSI Extension for administrative staffs of the Forestry Bureau Headquarters and its 8 district offices was held in 10 May 2017, Taipei 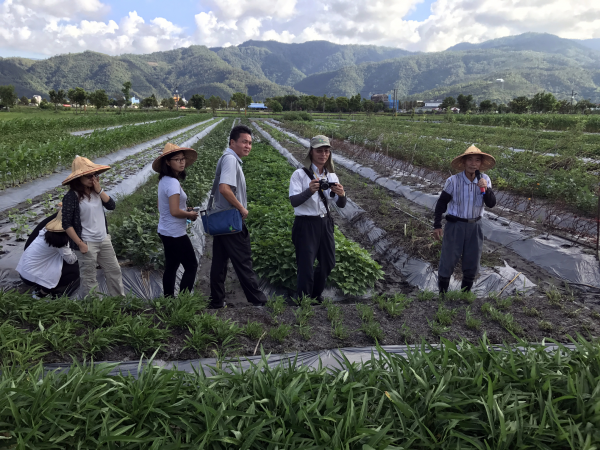 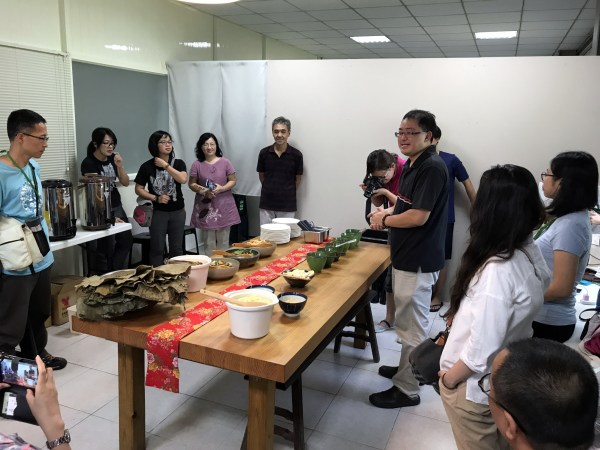 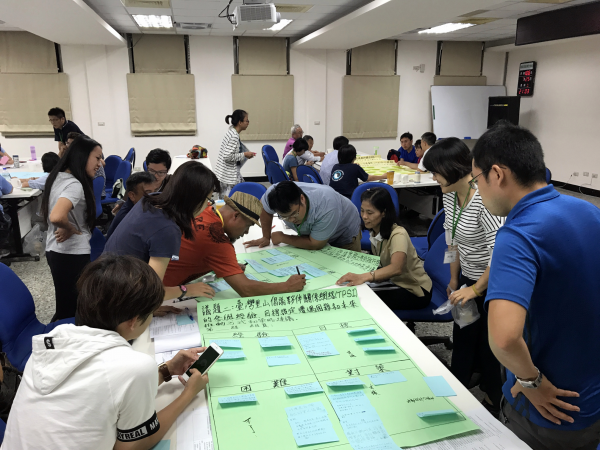 Symposium (morning session) for TPSI-all 2017: Review and outlook of TPSI development, was held, in cooperation with the Chinese Society for Environmental Education (CSEE), at the National Museum of Natural Science, Taichung on 15 Sep 2017

Workshop (afternoon session) for TPSI-all 2017: Review and outlook of TPSI development, was held, in cooperation with the Chinese Society for Environmental Education (CSEE), at the National Museum of Natural Science, Taichung on 15 Sep 2017 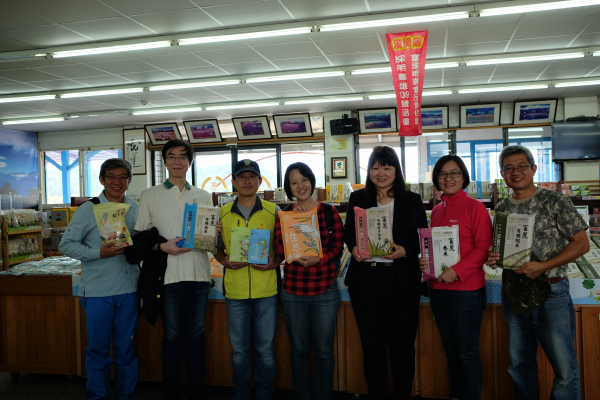 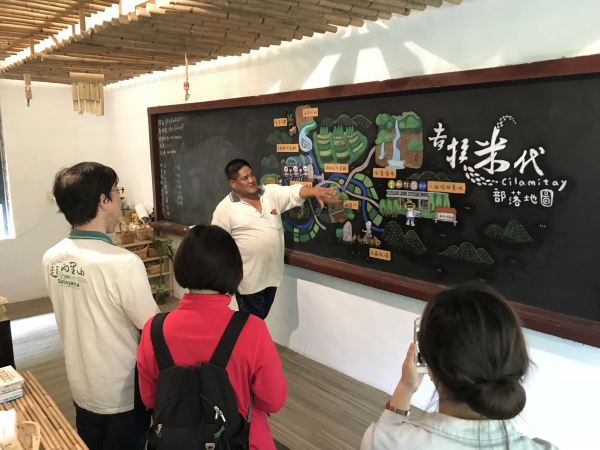 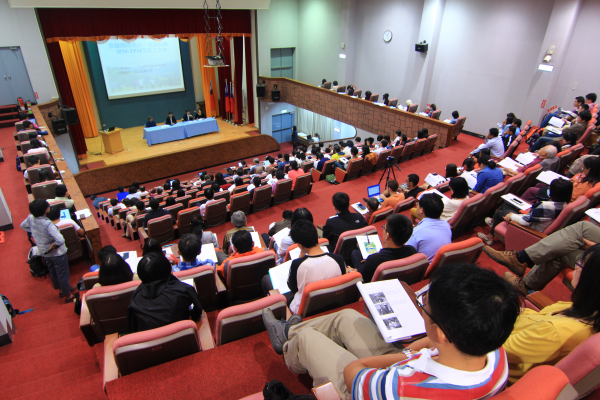 Mr. Naoya Tsukamoto and Ms Evonne Yiu from UNU-IAS were invited to give speeches in morning Symposium on IPSI-TPSI exchange and Satoumi Initiative, 16 Nov 2017